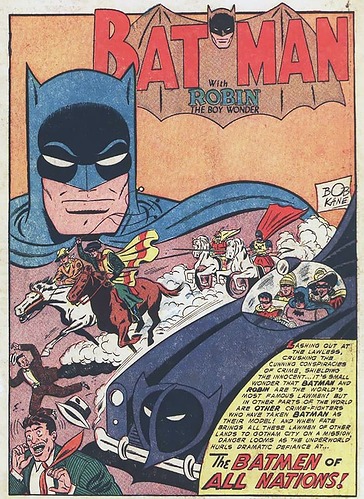 Batman: The World, now in stores and on DC UNIVERSE INFINITE, represents the greatest collection of international talent ever assembled for a Batman story. The ability of such a diverse collection of creators to translate Batman into their own distinct culture and comic book tradition speaks volumes for just how universal the idea of Batman is, inspiring far more than the Gothic American city setting which he was created for. After all, while Batman has sworn to protect Gotham with all his considerable skill, intellect, and willpower, his mission for justice far exceeds the city’s borders. Followers of Batman’s adventures have seen them extend across borders and oceans, battling evil wherever it may rise across the globe.

Still, you can take the Batman out of Gotham, but can you really take the Gotham out of Batman? If you’d like to see how Batman fares out of his element for yourself, we’ve assembled a collection here of stories which have put the “World” to the test in his title of “World’s Greatest Detective.”

Batmen of All Nations

Detective Comics #215 represents Batman’s first concentrated effort to extend his mission to the global stage. In 1954, when even the United Nations itself was still a concept the world was adjusting to, Batman was reaching out to previously unknown counterparts across the world to form a global network of vigilance and crimefighting. The United Kingdom’s Knight and Squire, Italy’s Legionary, Australia’s Ranger, France’s Musketeer, and Argentina’s El Gaucho all stood in attendance for the Batmen of All Nations’ inaugural meeting, acknowledging that heroism is by no means an exclusively American affair.

To read the full list of nine stories where Batman succeeds out of his element, head over to DC Comics!

Which of these stories is your favorite? Let us know in the comments!