Barry and Patty and Iris

I was reading the Rebirth series and decided to go back to New 52s… Where Barry is with Patty Spigot and Iris West is a friend. What timeline and earth is this? And can anyone point me to Patty’s first appearance?

Well, the New 52 was meant to be a reboot in a lot of ways for the DCU at the time – some characters like Batman and Green Lantern were softer and didn’t have a lot of changes, but other characters like Wonder Woman, Superman and, in this case, The Flash, had much bigger changes. So the New 52 undid Barry’s relationship/marriage with Iris and started with him dating Patty.

As for Patty’s first appearance, I had to look it up myself and according to Wikipedia her first appearance in the comics was DC Special Series #1, which sadly doesn’t seem to be on DCUI. But from what I understand, she really didn’t have much of a role in the comics until Geoff Johns’ run on The Flash from shortly before Flashpoint.

Thanks for the info! I’ll try and dog in the archive bins for issues. Do you have a preference of which love interest you prefer?

Preference? I guess Barry and Iris, because that’s the relationship that seems to have had the most pull and the one I’m most familiar with, but I don’t think I’m as attached to them as a couple as, say, Batman and Catwoman, or Aquaman and Mera.

That does remind me of some of the weirder brief love interests Barry had over the years.

In the Bronze Age, a little while after Iris West died at the hands of Reverse Flash, Barry briefly dated fellow JLA member Zatanna. But it didn’t last long, the two decided to stay friends. 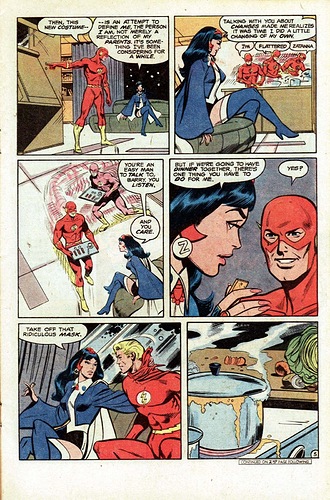 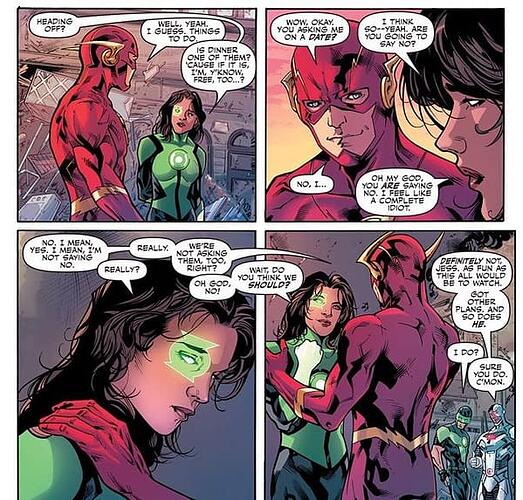 And near the end of his run, the two actually meet children of theirs from an alternate/possible future, along with the rest of the League. 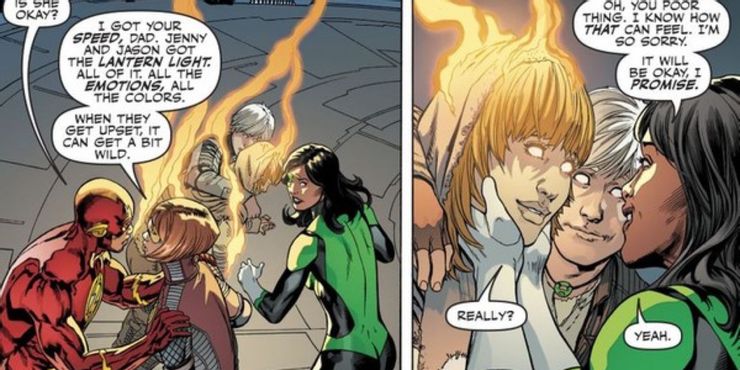 Ooh, i like those ships. I think that’s interesting for him to date a fellow league member. 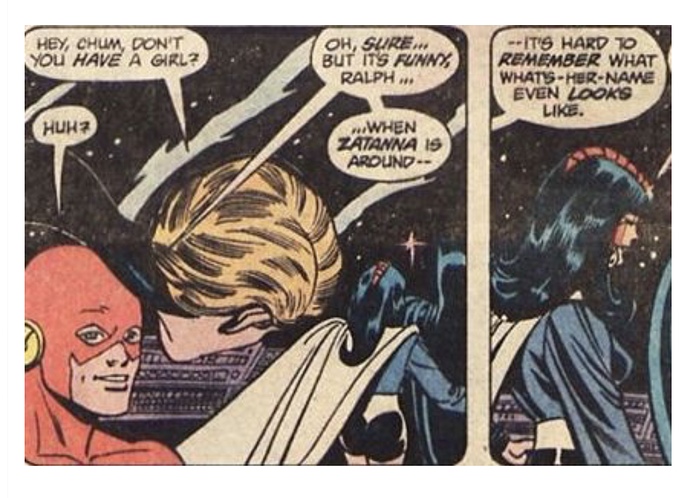 Yeah, I saw that while looking at Google Images for that last post. Not really liking that moment – I dunno, I just don’t see Barry as the kind of guy that really looks at other women when he’s with a partner.

I totally agree which is the main reason why I hated them hinting at this Barry/Patty thing after Flash Rebirth! 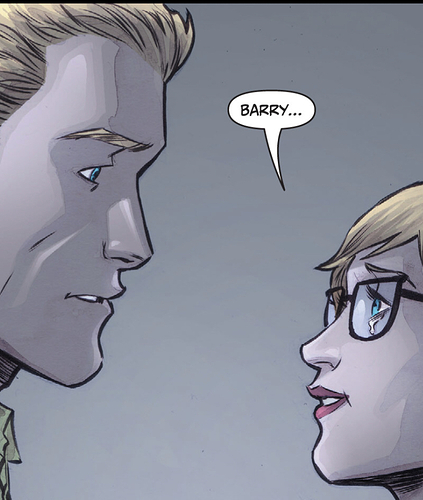 I just don’t see Barry as the kind of guy that really looks at other women when he’s with a partner.

I agree. That’s out of character for him. How else am I supposed to know it’s Wally West then?

What’s the verb, “Batmaning”? And by all means… start that thread! Lol

In this case it means giving Barry an unnecessary tragic childhood event (murder of his Mother and his Father sent to prison for it) Just because the powers that be feel Batman’s traumatic origin should be the template for everyone else.
Barry’s parents lived to a ripe old age happily and died somewhere off panel between the events of the return of Barry Allen and Chain Lightning

Oh, I agree with this. I don’t think it is necessary as Barry’s kind personality is already aligned with his do-good attitude. I’m not sure if it is ever explored but it should be talked about: Bruce’s and Barry’s lifelong reaction and choices due to their unfortunate origin stories. I haven’t finished 52s yet, but not digging the new look on his parents’ relationship.

But I will say that as a whole, it is a very good reason for his Flashpoint motivation. It is both understandable selfishness but also, good for his character arc to accept what he cannot change or his understanding of consequences.

Interestingly enough, Mark Waid had a similar story in mind for Wally West. If I recall correctly, the story took place early in Wally’s career as Kid Flash, one of his school friends was killed (possibly committed suicide) Wally wanted to save his friend, so he went back in time to save/stop them but his attempts had horrendous consequences of some kind or another. The story was never actually done but It was alluded to by Iris who mentioned that Wally had never been comfortable with time travel since the first time.