Who do you prefer and why? Me personally i absolutely loved bale, he’s my favorite version of live action batman of all time. Keaton was my favorite bruce. I liked Ben Affleck, it just felt rushed with him. I wish he would of got a solo movie before BvS and JL. I also didn’t like his tone for JL, to silly for me. Could you imagine christian bale batman in the justice league movie? Nah cause he’s to serious for that silliness. I just wanted to get that out ha. Maybe i was just used to the dark ominous tones that the dark knight trilogy and MOS possesed, that ben affleck’s version wasn’t appealing to me that much. He should of just got a solo damn it.

Been by far. Bale’s movies are better but Ben nails the role.

Bale is my absolute favorite. The bad guys can hear their bones break before he does it for them.

One does not remind me of the Aflac duck… 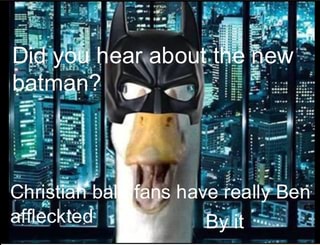 I though Ben was better. Bale has a strange lisp that has gotten under my skin since I saw him young in a movie Little Women.

I also found the voice change to be unnecessary. “WHERE ARE THEY!?” Full-on constipated Bale mode, crapping his enemies to death. Drink some prune juice Bale!!!

I suppose I don’t have to mention such small differences like the sepia filter making HUGE impacts. It called for a realistic tone, Bale’s Batman had weak fights and no climactic twists because of this. Strange but true. That Bane fight or wait, that wasn’t even Bane…

I agree with some here who said that the cgi is Ben’s Batman was bad but it was just as equally bad in Nolan’s films.

Idk, Ben seemed much more passionate about the role.

My choice is Batfleck, I’m locking in that answer but yes, I know the “cool” thing is to hate or downplay Affleck and Damon, but whatever. I love Batman Begins, hated Tge Dark Knight and Dark Knight Rises. Loved Batman vs Superman, loved Justice League.

Ben all day. One of the best actors of his time.

In the words of the great Kevin Smith - Affleck could play the shark in Jaws!

He was the bomb in Phantoms.

Though Tbh I still dont think we have had the best Batman on the big screen yet. Nobody has matched Conroy’s Batman on live screen.

Hangs out alone in the corner playing with Keaton action figures

sees AJ in the corner

Hey, are those by Kenner?

Yeah! Complete with all the wonderful toys!
Shares Jokercycle vehicle with Vroom

Sorry to interrupt everyone, we’ll just be over here in nostalgia corner.

Cool! I never had the Joker Cycle!

gets on the floor to play

I feel so inferior…

I just have the McDonald’s Batman Forever Glass Mugs :’(

I prefer Batfleck. He felt more like Batman/Bruce Wayne to me. Bale and his universe was too grounded. I also believe Affleck’s suit and gadgets were way better than Bale’s.

My top 3 Batman actors would be:
Ben for sure number 1
Michael number 2
Val number 3. (Good actor just stuck with a crap script lol)

@Gibby I had the Mickey D’s Two-Face and Riddler glasses from 1995 up until a few years ago.

The Two-Face one in particular was pretty sweet, what with the flipping coin being the handle.

Tough choice for me between Affleck and Keaton. Keaton has nostalgia on his side…and I like how his Batman is very succinct and doesn’t do that much talking. Affleck…I loved his movies…and he just had the look. Whenever I see Affleck in the suit I think Greg Capullo Batman right away. Too bad we’re not gonna see any more of him.