Avengers Endgame: What Does it Mean for DC

So Avengers: Endgame is out now, it’s made over a billion dollars in just a few days, it was epic and…

What does this mean for DC’s movies. I didn’t think that it was possible before, but after seeing that final battle, a live action Crisis on Infinite Earth seems totally possible. But how do we get there? Do we want to get there, or should the DCEU (or whatever the movie universe is called now) go in a different direction? What storylines could be used to build towards a massive final battle? What else could the movies do to distinguish themselves? Discuss.

I don’t think DC should try to make an Endgame. At least not for a while. DC needs to take its time and build up film properties and characters people feel real fondness for before mashing them together. Problems accrue when you rush things.

There’s no way you can replicate what Marvel has done. DC has a pretty good formula going on right now so they should take the time to focus on character development rather than a big buildup already. However, I do
like the subtle hints for future movies though. It keeps audiences interested if the specific movie is successful.

One more thing. I’m curious as to how long said movie audiences will continue to be interested in comic movies now that Marvel concluded its grand finale. Hopefully there won’t be comic fatigue like Star Wars. I’d like DC to continue making movies and not feel like they’re forced to.

Its just further proof the audience for Superhero movies is one of the biggest there is and its not going anywhere anytime soon.

The Marvel Movie gets bigger and bigger from Black Panther to Infinity War to Endgame. And now with Wonder Woman, Aquaman and Shazam! DC has started his climb back up. The success of Endgame should show DC the potential that they truly have with material they have.

While I don’t want to see Justice League Endgame

announced tomorrow, I do hope this makes WB and or DC realize they could have something very similar. I don’t think it even has to be a Marvel like shared universe. For year I’ve been of the opinion that you could just have say Lois or Clark attend a Ferris Aircraft press conference and have Carol introduce Hal to Lois or Clark or something like that. I mean we already have the Steppenwolf reference in Aquaman and Wayne Security(?) in Wonder Woman and that’s all you need in my opinion. I

Do I think a JL movie will have EG success, no I don’t. To be honest I’m not sure Marvel will have a movie come close to EG moving forward. But I very much think a JL movie could and should be a 1B+ movie every time they come out. And please don’t make it the JL b team.

I was thinking if DC got to a point where they have their own grand finale…instead of Darkseid being the big baddie why not have Nekron instead? 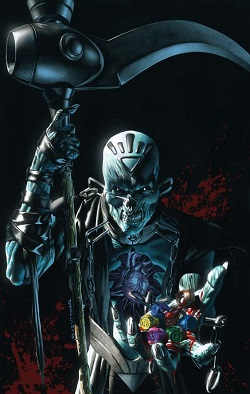 Marvel wasn’t ‘racing with someone’ when they started doing the MCU.
They hit a few snags along the way, but they stuck to it.
Endgame is just the reward for persevering and doing what was said couldn’t be done.

DC/Warner definitely didn’t believe it could happen. Or they would’ve already done it.
Actor pay-rates get too high after a few films, audience turnout declines by the third film.
The only thing feasible to DC was to reboot after some time for the audience to cleanse its palate.

DC then saw Marvel doing it successfully and wanted to jump straight to the reward.
That’s what messed them up.

They needed to wait. Get all the individual characters out there first so they can see what the audience likes.
Apparently Wonder Woman, Aquaman and Shazam gives an indication.
But they already did Justice League. Prematurely.

@ InMagno,
I don’t think audiences will ever get comic fatigue. No more than they ever got book fatigue.
Now, super-hero fatigue… that’s a different story. Everything moves in and out of popularity after a while.

I would hope not! These comic movies are wonderful regardless of the Marvel vs DC rivalry. If anything, it’s good for business and fan service.

They should have just stuck to their Snyder plan. Knowing what we know now, it seems that our Endgame was going to be an Injustice/Flashpoint hybrid. However, that was deemed “too scary” and now we get “unconnected, solo films”.

Actually the success of the Marvel Cinematic Universe is/was good for comic book movies in general because it expanded the genre to more intellectual properties (IP’s) than just Batman and Superman. What does that mean for DC Films? Well, it has given them the courage to open up another division (DC Films) and to explore IP’s other than Batman and Superman, to take risks by producing films about subgenres other studios were not willing to take or failed at (female superheroin solo films), and to create this portal (DC Universe) to further exploit their other IP’s.

On the live action Crisis, CW everyone?

I will be first in line, so to speak, for CW COIE.

It means there’s no superhero fatigue at the box office. It will die down eventually but Westerns rode high from the 1920s to early 70s, and still managed a few hits after. Like the Western, superhero movies can carry a lot of different tones, ideas, sub genres, etc and should be around a long time.

It made me so sad to think about that if DC just waited patiently we could be talking about a awesome DCEU.

When it’s all said and done we will have a great DCEU.

@msgtv, the difference between Westerns and Comicbook genre is that the latter can be adapted to the Times, while the former is now a period piece that today’s generation of moviegoers can’t really relate to.

The audience needs to be invested in the characters and unfortunately WB didn’t care about that. They just wanted a universe done ASAP and it backfired hard. It’ll take years of solid solo movies before anyone cares about another JL movie

With the current universe DC will always be known as those guys that tried to copy Marvel. Sad but true.

I think the movies should stick to being stand alones honestly. At least for a few more years.

TV on the other hand have done an excellent job of building a connected universe and I truly think our version of Endgame is coming this fall. Will it have the budget of Endgame? No. Will it have all of the attention that Endgame is getting? No, and that’s a shame. I do expect it will be every bit as epic though.