Atlas of the DC universe

It is certainly NOT modern cannon by any means, but in the early 80’s there was a tabletoo DC heroes roleolaying game, and one of the supplements provided an atlas and showed where the various fictional cities were, and what state. It was pretty facinating. Each of them was spun like a fictional “sister city” to an actual city.

Gotham City is in south Jersey. Like if southern New Jersey had a New York. So next time you watch jersey shore, and see the brightly colored outfits, and sort of silly nicknames, OMG gotham is along the Jersey shore.

Metropolis was in Southern Illinois (where an actual small towm called Metropolis exists), and was a gleaming sister city to Chicago.

Central City is in North Michigan, and with it’s emphasis on innovation, and speed, was a higher tech sister city to Detroit.

Coast City is in Northern California and the Ferris Aircraft facilities are along the coast.

The middle east was also pretty crazy, Kandaq’ sits right next to Iraq, and Bilaya is like a sliced off puece of Lybia. Qurac sits on the side if Iraq, sharing a border with Kandaq.

I’ve has this question before. So I did some looking and found this map. It only gets America. Not sure on any international stuff but this map seem accurate.

I always considered Central City to be Kansas City, which is close to the center of the lower 48.

And, according to the map, I’m right about KCMO. I didn’t expect Keystone City to be KCKS.

Coast City in NorCal is kind of odd. It always seemed to be a pretty obvious Los Angeles stand-in. I tend to think of Star City as more the San Francisco equivalent.

And the populations and annual crimes on the map are hilariously random. Ivy Town has more crime than Metropolis? And double the (oddly small) population?

And Coast City’s location may have just been Johnsconned. I recall some of the action early in Geoff Johns’ Green Lantern run taking place at Edwards Air Force Base, which is all the way down by Orange County somewhere. 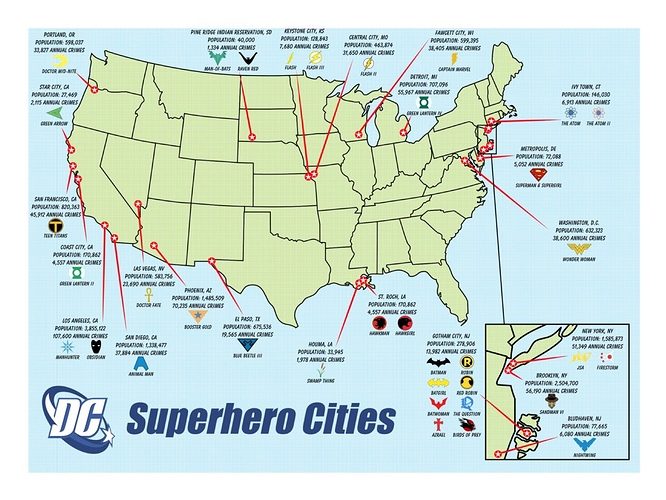