ASK...THE QUESTION: Why are Batgirl's Eyes Visible, but Not Batman's? 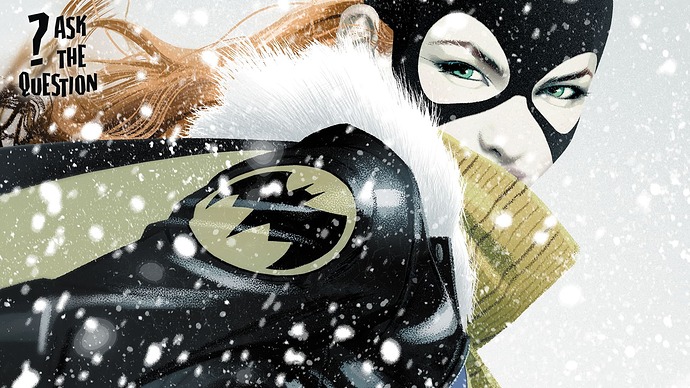 Hello again! I’m Alex Jaffe, better known to our illustrious community as HubCityQuestion. Every month, I take a look through some of your most burning inquiries and go dangle some spooked mooks off of rooftops by the ankles until I get the answers you crave. How do YOU get in on the action? I’m glad you asked. All you really need to do is to stop by my virtual office and post your question. You may find an answer here…and a handsome Question-themed community badge for your profile to go with it! You like badges, don’t you? Who doesn’t? But enough with the rhetorical questions. Let’s get to the REAL ones. 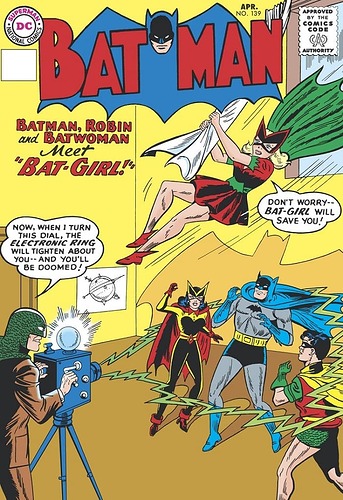 Why does Batgirl not have white eyes on her cowl, but Batman does?

They say that eyes are the windows to the soul, Daredevil. And part of what makes Batman a symbol of fear to his enemies is the idea that, as an entity, he is unknowable. The white lenses which hide his eyes lend credence to this illusion. The Batgirls through history stand for something else, however—to express themselves through the mantle. One could say that a Batgirl’s eyes show through her costume because they represent her human face.

In the case of the first “Bat-Girl,” Betty Kane, she and her aunt Kathy Kane, the original Batwoman, both eschewed lenses for what were likely in retrospect Comics Code reasons. Batwoman and Bat-Girl were both introduced to comics to add a female presence into the lives of the Dynamic Duo, and hiding their feminine eyes behind those masks would do just as much to dilute that purpose as showing Bruce’s eyes through the cowl might harm his own. Later, in the case of Barbara Gordon, the lack of lenses suggests a homemade quality to her costume. It took millions of dollars for Bruce Wayne to become the state-of-the-art crimefighter he is, but all it took Barbara was some fabric, a sewing needle, and the will to bring some light into a dark city.

Of course, there’s also the fact that Barbara Gordon was created for season three of the ’60s Batman TV show, and on that series, no one wore the white lenses. So, the costume designed for Barbara on the show became the new standard for Batgirl in the comics and has remained so through myriad reinventions of her costume and Stephanie Brown’s as Batgirl after her.

(You may have noticed I left out my favorite Batgirl, Cassandra Cain, whose eyes are not typically visible through her cowl. This is because—as Barbara and Bruce have both attested—out of every member of the great wide Bat-Family, Cass is the most like Batman.)

To read the rest of the answers for this month’s Ask… The Question! head over to DC Comics!

If you want to submit your own question, head on over to Ask… The Question! in our community thread!

Whoo-hoo!
Thanks for the great detailed answer, HCQ!
Also, proud to get the badge​