ASK... THE QUESTION: How Many People Died in Each Crisis? 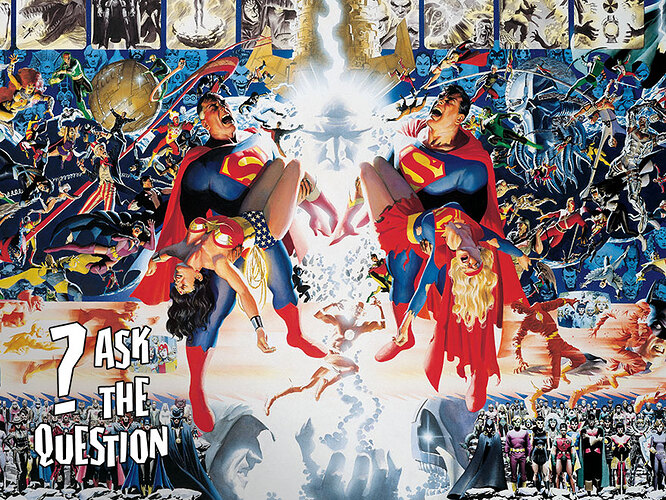 Hello, I’m Alex Jaffe, better known to the DC Community as @HubCityQuestion. Every day, I take your most burning questions about the vast expanse of the DC Universe and employ my personal trove of knowledge and tireless research skills to present you with as satisfactory an answer as I can achieve. And every month, I highlight a few of these questions in this column for the curious minded DC fans out there. It’s a simple enough task to get in on the action—all you need is to swing by our illustrious community and drop me a line. After all, you’ll never know the answers if you don’t dare to ask the—

Well, I’ll leave the wordplay for later. For now, let’s get into the column.

What would you estimate is the death toll for each Crisis?

Current common understanding of the “Crisis” event in DC history is a list of seven major events with reality-altering implications, codified some time before the “Anti-Crisis” of Dark Nights: Death Metal. The death toll in those crises range more or less from zero, to millions, to infinity, to negative infinity in their ramifications for the reorganization of reality. I’ll go through them one by one:

Crisis on Infinite Earths – Countless infinities of lives. Thanks to the Anti-Monitor, for reality to survive, the infinite multiverse was reduced to a single universe.

Infinite Crisis – Millions, as the war between Earth’s heroes and the Secret Society of Super-Villains unfolded in this reality with relatively few reboots. The entire city of Blüdhaven was the heaviest loss.

Final Crisis – The death toll from Final Crisis is unclear, but likely much less than Infinite Crisis . No major population centers were destroyed, and Darkseid’s goal in Final Crisis was more about control than destruction.

Flashpoint – Also essentially zero. It was a significant timeline restructure, but few if any lives were lost.

Convergence – Negative infinity. By the end of Convergence, the destruction of the infinite multiverse from before Crisis on Infinite Earths is reversed, and countless other worlds born since then are added into the larger omniverse, retroactively making the casualties from that first event zero.

Dark Nights: Metal – This last “Crisis” is a strange case in that it reveals that universes in the Dark Multiverse are being born and extinguished all the time. So, the death toll is technically somewhere around Crisis on Infinite Earths , except it’s happening constantly without us knowing about it. Which is to say that countless infinities of lives are getting extinguished all the time, but Metal is the first time we’ve noticed it.

Well, it’s not happening in our universe, so it’s not our problem, right? At least, not until the evil Batmen from those dead worlds all come to call.

To read the other excellent questions in this installment of ASK… THE QUESTION, head over to DC Comics!

Was your estimate of deaths in each Crisis accurate? Let us know in the comments!

I think Zero Hour had a few casualties. When Extant battled the JSA and took (almost) everyone’s youth, Rex Tyler, and eventually Charles Chuck McNider are aged to death, after Al Pratt gets vaporized. And Doctor Fate is “destroyed,” leaving Kent and Inza as mortals. I don’t think any of them come back until after Infinite Crisis, do they? (Wally turns out to be just fine.) 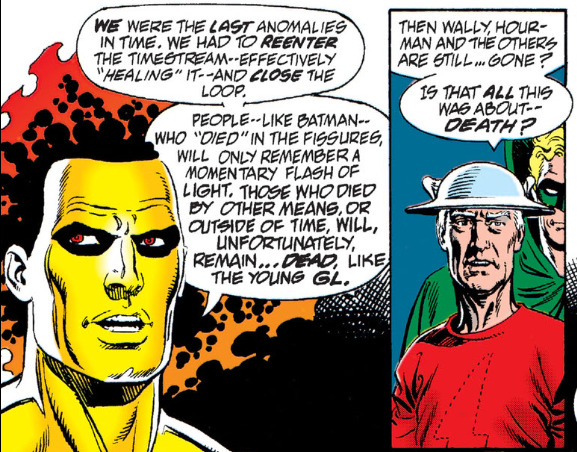 (Though she didn’t die, you could also call Hawkgirl a victim of Zero Hour, as all the hawks are merged in to one distinctly male entity.)