He’s also from Alantis, but to be honest, I like Aquaman the best.

Is it true that Jericho was originally going to be African American?

Sort of! As young writers, Marv Wolfman and Len Wein originally planned to introduce a new Black superhero named “Jericho” in 1969’s Teen Titans #20. This Jericho was a street-fighting hooded vigilante, who fought against gang violence and enlisted the aid of the Titans to help him. In the original script, Jericho and the Teen Titans discover that a villain is manipulating the feelings of racism towards Black teens to motivate them to gang violence. At the end of the story, Jericho was revealed to be a Black teenager himself named Ben, and brother of one of the gang members.

As those who were there told it later, there was a changing of the guard on the Teen Titans title during the production of this issue, and new editor Carmine Infantino hated this story. He was concerned that readers would cry “reverse racism” towards white people, as the story ultimately places the blame on white bigotry for driving the gangs to crime, and the story was changed. In the final script, Jericho was changed to a white teenager named “Joshua,” and the teen gang members were revealed to be mind controlled by aliens from Dimension X.

Years later, Wolfman would reuse the “Jericho” name, but for a completely different character. So while I wouldn’t say Jericho was originally supposed to be Black, I would say that Wolfman originally intended to give the name “Jericho” to a Black superhero.

After all, this wouldn’t be the only time Wolfman reused a name from his first Teen Titans run. Just two issues prior to this script, in Teen Titans #18, he introduced us to Russian superhero Leonid Kovar — codenamed “Starfire”!

The poor people in the DC Universe trying to keep track of all these superheroes. They are not aided by the confusion of duplicate names, legacy characters, and stuff like there being 8 human Green Lanterns.

I finally saw the new Predator movie, titled “Prey” that sent me back to my DC/Darkhorse crossover collection. My query here, stems from the JLA vs Predator graphic novel by John Ostrander, from 2001. It contains the first (and as far as I know, only) time when the Martian Manhunter has been beheaded.

Now since Ostrander, was the writer on the Manhunter series for vol. 2, I’m going to assume that he knows things about the character, that we don’t. Over time, he added (like those before and after him) to the mythology of our hero. Like those others, he was responsible for origin revisions, with additional powers and abilities that now exceed Superman himself. One of them appears to be a “mind” which is located somewhere other than in his head! And did I mention that “it” had been removed by a Predator?

Since all this action presumably occurs on an alternate Earth, in the multiverse, let’s say that “this” J’onn J’onzz has physiological “differences” from the original. But, if this “out” is not acceptable, then did mister Ostrander (or anyone else) ever explain how that flies in the face of so much existing history on MM, both past and present. 'Cause that, has always bothered me.

Recently I became aware of a story in Urban Legends called Belle and Beau in which a couple of low-level thieves go around robbing Gotham’s criminal elite. After Batman saves the couple from a vengeful Killer Moth he gives them a stern talking to and advises them to leave Gotham as he allows them to get away.

After reading that I became distracted by other things as one often is in life. Recently that story was brought back to mind and i decided to see if I could find out more about it. While looking into it I was made aware of a story about the Ghost Dogs from last year. They were jewel thieves being compared to Catwoman. When Batman finally caught one he discovered it was a young girl who was doing a Robin Hood thing by robbing a group of wealthy landlords who had recently displaced a group of 100 families because of urban renewal. After giving her a stern talking to Batman lets her go even though he realizes she didn’t turn over all of the jewels.

That surprised me that he had done something like that in two different stories in a little more than a year apart. That raises two questions:
Is Batman getting soft in his old age LOL?
Have there been other instances when Batman knowingly let criminals go? Other than Catwoman of course.

,
It’s your friendly neighborhood Reaganfan78. Ok here’s my question, I was watching season 6 of Smallville, the other day, and was wondering when did Superman & Green Arrow ever team up for the first time and how often were they seen together? Thankyou.

Another good question for the Q-meister. Looking forward to his answer. In the meantime, maybe this little bit of trivia will hold you over. Before becoming Green Arrow, young Oliver Queen had a stopover in Smallville, Kansas. He was temporarily enrolled in school there, where he met a new classmate named … Clark Kent.

This story took place in Adventure Comics #258, dated March of 1959. The cherry-on-top of this crossover classic, includes a separate Green Arrow story in that issue. As G.A. was the back-up feature in residence at that time. And now, for a query of my own about the Ace Archer, if I may.

Years ago, Oliver lost his fortune and turned him into the urban hero of the people we know today. Whatever happened to the Arrow car, cave and all the other Batman rip-off items that less than creative writers saddled him with? Did he dynamite the cave to keep it’s secrets from getting out someday? Or is it all in mothballs, waiting for some future writer to cleverly use it all again? Just curious.

You scooped me, Wrightline! I was planning to write up more or less exactly this in my column this month. Back to the drawing board.

As for what happened to those classic artifacts of Green Arrow’s golden age, there’s a whole plot about that in the 2000s’ Green Arrow #33, a fill-in issue by Scott Beatty. It culminates in an online bidding war with Batman.

What is the address of Wayne enterprises?

“Sorry about that, Chief.” With obvious apologies to Maxwell Smart. I’ll definitely have to find that issue of Green Arrow. Seems like Scott Beatty was that clever writer I mentioned. Sounds to good to pass up!

One last thing before I call it a night, an turn in. I was going to unload this over at Office Hours, next Tuesday. But they’ve got a “Closed until Sept. 27th” sign in the window. So I guess you’re my best outlet for this subject right now.

I think it’s safe to say, that many of us (being the comic fans that we are) have seen our share of Marvel movies. Whether from Universal, 20th Century Fox, Sony or the later blockbusters from Disney/Marvel studios. Which naturally includes their various takes on the X-men. Which is why, I don’t at all understand Warner’s reasoning for not only filming, but pushing a scene from Black Adam (in their latest trailer), that is nothing more than a constant reminder of those mutant cinematic features!

I refer of course, to the apparent mansion-like headquarters of the JSA, with an underground hanger for Hawkman’s ship. A portion of the property grounds (and hanger roof) open, and the Hawk ship rises. Carrying our JSAers off to their next adventure. Every time I see it I’m thinking (along with so many others), why’d they have to rip-off the X-men like this? And who, possibly thought, it was “a good idea” in the first place?

Hopefully, this will be Black Adam’s only stumble outta’ the gate. More comparison’s to Marvel, we don’t need right now!

We recently just celebrated Batman Day. Do any other heroes get a day to spotlight them?

There are! Superman Day was established by Warner Bros on June 12th, 2013, to promote the imminent release of the film Man of Steel. Wonder Woman Day is, perhaps a bit more sensibly, October 21st, the anniversary of her first appearance in All-Star Comics #8.

A few weeks ago i asked you if DC and Mad had ever crossed over. You replied not storywise although Mad characters made several cover appearances. We won’t know until December for sure but i notice our black and white Spy vs. Spy friends are on the cover of the Flash. I suspect they will probably not be in the interior pages.

So I just looked into the origins of one Cindy Reynolds for the first time ever, and boy howdy! May I just say, yikes! I can see why the New 52 gave her such a drastic new origin and costume

That being said, have we ever been given any reason to believe that the post-Flashpoint Cynnthia is Romani? And have we seen either one of them since the shift to the “Canon is What We Make of It” approach to indicate which one is sticking around? 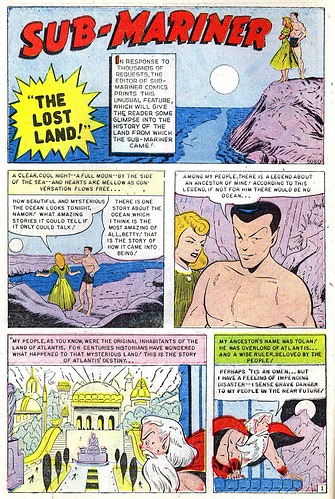 ,
It’s your friendly neighborhood Reaganfan78, today I subscribe to DC Universe Infinite for a year, looking forward to alot of comic reading.

So here’s my question to you…
I would love to read about Fear State that came out last year, where should I begin?

Perfect timing for a long Halloween! See what I did there?

My other question is, I was watching season 7 of Smallville, when did Supergirl first meet Lex Luthor and when did she started to hangout with him?

Thankyou so much for your time and I hope you have a great day.

Ah, right you are! Well, I never claimed to be a Marvel expert.

I would love to read about Fear State that came out last year, where should I begin?

Perfect timing for a long Halloween! See what I did there?

I do indeed! Fear State is compiled for your convenience here.

My other question is, I was watching season 7 of Smallville, when did Supergirl first meet Lex Luthor and when did she started to hangout with him?

I broke down Lex Luthor’s first encounter with Supergirl in this post, from 2019:

The answer to that question is really quite complicated, when you account for the existence of girls both Super and Power across multiple eras. But I’ll do my best to untangle this for you. First, we’ll talk about Supergirl. The Supergirl we know best as Kara Zor-El made her first appearance in Action Comics #252 (1959). But it would be a while until the world learned who she was — all early Supergirl stories take place at Middle Orphanage, where Supergirl lived under the identity of Linda Lee…

As for when they started hanging out, Supergirl- or, at least, some version of Supergirl- would actually date Lex Luthor for some time in the 90s, during a point when Luthor was masquerading as his own long-lost son. Their relationship would begin in Superman: Panic in the Sky.