I was just scrolling through “ALL COMICS”, and I saw the cover of Harley and Ivy Meet Betty and Veronica #1, and it got me thinking… If Ivy’s lips touch a straw, or a cup, is it then poisonous?

Only if she wants it to be. Ivy herself is not toxic by default, but uses toxins when it suits her. Historically, her deadly kiss is performed through the application of plant-derived lipstick. These days, Ivy is more of a plant elemental, and can more or less exhibit the properties of plants as she chooses. Ivy isn’t an indiscriminate killer (most of the time)… so she’s choosy about leaving behind that sort of deadly trace.

Now that Snagglepuss (and some fellow Hanna Barbara icons) has been introduced into the DCU , via a marvelous 2018, 6 issue mini-series during the McCarthy era days of the 1950’s, I have to wonder. My original thoughts went to Mr. Tawny , who (I believe) was active during that time period, maybe turning up in a sequel. A side thought to Wonder Woman , changed the direction of my inquiry, somewhat.

Esper Quinn ’s article on Queer Hot Spots in the DCU , was a reminder to us all as to Diana ’s true nature. That she was in fact, the first bisexual character in DC ’s long history. That long before Steve Trevor entered the picture, Princess Diana must have had (as did her fellow Amazons around her), at least one lover among them.

Now, ever since the new Rebirth era has taken root, for the latest “shuffling of the deck chairs” so to speak, I haven’t climbed back on board as yet. So, I can’t speak to what is or isn’t going on with some of my favorite characters. What can I say, I prefer original Coke . So, my question is, have any of her writers tackled this topic? If so Q , where and when. Thanks!

I wish the answer to this was yes, Wrightline. But for some reason, apart from a brief mention early in Greg Rucka’s Rebirth run acknowledging a number of girlfriends Diana had growing up on Paradise Island, Diana’s bisexuality hasn’t really been made visible over the past 5 years. With Tim Drake and Jon Kent recently bringing more queer representation to the Bat and Super corners of the DCU, I am hoping this changes soon for the Wonder world.

Wow! One of my older questions, I’d forgotten all about. Nice to see that you didn’t. And given the expanded nature (shall we say), of the DCU these days, I can see why you went back to it. We’ve certainly come a long way since the animated days of the Ambigiously Gay Duo, haven’t we.

Not sure if this is really your domain, but do you know whether there’s going to be another Round Robin (and if so, if any of the ones who lost this time will be included?)

I do not! But then again, even if I did, I couldn’t tell you before an official press release. That goes for any potential upcoming or unannounced projects.

I know you can’t tell us the future, but I thought that maybe by calling it the “2021 Round Robin brackets”, we were supposed to know this already and we were all just being dense. But I assure you I won’t be asking you to give anything away that’s clearly supposed to be a mystery.

such a cool answer, thanks for keeping us informed HCQ!

Who was Jerry Siegel, really?

Jerry Siegel was kind of a shy, soft-spoken fellow, who empathized quite a lot with Clark Kent. He was never confident around girls. He grieved over the loss of his father, who was killed in a robbery after trying to stop the robbers himself. And he grew up in a time in the 20th century when anti-semitism was at his strongest, and he often felt the need to hide who he was in public. He was an aspiring writer who, like many of his Jewish contemporaries, could only find work in the nascent comic book field which was hiring near everybody, as more established publications habitually turned Jews away. Jerry Siegel was the creator of Superman, because he had to create Superman, to live the life he wished for himself.

Siegel served his country in World War II, and married twice – the second time to Joanne Kovacs, whom he had met when he hired her to model for Joe Shuster as Lois Lane. His public life was defined by legal battles over the creative rights to Superman, but through all that time, Siegel never stopped writing comics.

How did Mr. Bones from Infinity Inc. go from Villain to head of D.E.O… I know he tried to redeem himself through Infinity series but do not know where he went after that. And did he loose his rhyming couplets at some point too?

Mister Bones’ penchant for whimsical touches such as his doggerel rhyme left him the day he was used to kill team leader Skyman in Infinity Inc. #51-53, and resigned from the team in shame soon after. His last stand with the team was the 1988 Invasion! storyline, where all of Earth’s heroes banded together against a coalition of invading alien forces. Then, for ten whole years, Mister Bones disappeared from comics entirely – until he returned in Chase #3 as director of the DEO. Whatever happened to get him there in the interim, he doesn’t talk about it. But if I were to guess, I’d say that Bones took up that DEO position to ensure that nothing like what happened with him and Skyman could ever be allowed to happen again.

When Booster Gold first decided to become a superhero in the 21st century, he stole his costume from the museum he worked at (among other things). Who’s costume was it originally?

Well, we know that the force field tech and his flight ring are actually from the Legion of Super-Heroes, so how they ended up in the museum in the 25th century involves some time travel malarkey. As for the rest of his equipment, that hasn’t been explored in the comics or anywhere else. Either they belong to heroes who are yet to be born or discovered, or- and this is exactly the kind of tomfoolery I can imagine someone pulling- it turns out to be Booster’s costume itself, in a paradoxical self-sustaining time loop.

Last night, during Stephen Colbert’s monologue on the Late Show, he was goin’ off on Fox News. Nothing new there, except the subject matter, was Superman. I fully expected him to talk about Jon Kent coming out. Instead, he brought up something new I was finding out about, for the first time. Superman’s famous tagline about " truth, justice and the American way" was undergoing a bit of a makeover. Fox, was apparently having a small “fit” about it. All in all, good for a few yucks. In the process, he inferred that he himself, might be Superman.

That, almost immediately triggered a memory from the 50s. Of real life comic and tv personality Steve Allen appearing in a Superman story. I don’t remember if it was in a comic or newspaper strip. But I did read it. So sir, couple of questions for ya, related to some you have fielded in the past.

First, what was that Superman story that I can’t quite get a grip on? Second, can we get a list of all those personalities (stage, screen, politics and sports) who have turned up in the pages of DC comics over these past many, many years? Thanking you in advance, for all the work I know you’ll put into this! Can’t wait to see the results (whenever that may be).

So I’m wanting to hire someone to make a custom art piece (like maybe one of those little statues you see of a DC character for 300$ or maybe just a poster sized drawing) of Deathstroke, Death Masq, and Deadpool in some funny situation and was wondering if you had any recommendations on where I should look to hire someone to do this. I’m sorry for wasting your time if this area of question isn’t the kind you usually answer.

Who are your favorite artists? You’d be surprised at who’s taking commission work! I suggest looking to see if they’re taking any requests on their websites.

Were older versions of Superman “smarter”?

I seem to remember something in the main universe cannon about his Kryptonian physiology giving him perfect recall and allowing his brain to process information faster than a human. However, the only feat of intelligence I can remember in recent times was him reading some medical journals and performing open-heart surgery with his fingernail (I think this was in Grant Morrison’s New 52 Action Comics run).

Are there any other cannon examples of main universe Superman being a genius? Which version of Superman showed the most intelligence?

After recently seeing this variant cover I just have to ask. when did Nightwing become so thick? 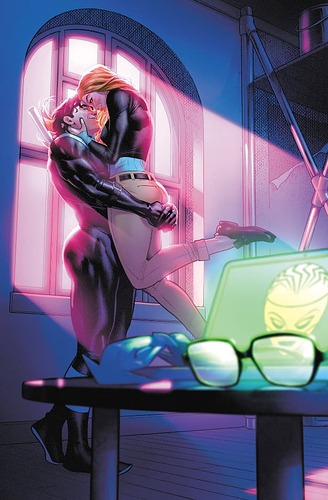 I wrote an article about this once! It started in earnest back in Secret Six. You can blame/thank Nicola Scott.

Hey question I have to ask that page you did about all of the awards dc has ever earned were the ones you posted accurate because of you go online and see there are some you don’t have like watchmen or sandman so I wanted to know is yours the correct one to follow or should I just look up the awards myself and what I see on wiki is correct?

Oh, I did that a while ago. I had some criteria at the time that I wasn’t doubling up on comics which had received awards elsewhere, but in retrospect I’m not sure why I did it that way.