Hey HCQ,
When a fictional character has been around since 1939, it’s inevitable that they’ll have died one or fifty-two times since then. So my question is, what was the first DC story to depict a world where Bruce Wayne/Batman was dead?
Thanks!

Wonder Woman and Supergirl in Dark Knights of Steel

Oh, I figured it was in main continuity if people were making such a big deal out of it. I only asked because I think Diana and Steve are still together on Prime Earth. I personally think it’s a bigger deal for Supergirl, since this isn’t the first time for any Wonder Woman throughout the omniverse, but it is for her. I’ve said it before, I’ll say it again: I think Tom Taylor thought he was in the clear because he thought Kara and Lena would be together in the end of the Supergirl TV series. #ReleaseTheSuperCorpCut! (Spoiler: Supergirl TV series)

Well, here’s my list of LGBTQ+ characters at DC (I don’t have a list of appearances though): Who Are All the LGBT+/Queer Characters at DC? - #4 by drewzirocks.3500

When a fictional character has been around since 1939, it’s inevitable that they’ll have died one or fifty-two times since then. So my question is, what was the first DC story to depict a world where Bruce Wayne/Batman was dead?

The first story I could find to depict the death of Batman is 1965’s World’s Finest #153, “The Clash of the Cape and Cowl,” by Edmond Hamilton and Curt Swan. In this Imaginary Story, Batman is conned into fighting Superman by Lex Luthor. Ultimately, Batman realizes Luthor’s deception, and he dies while protecting Superman from the Kryptonite weaponry of his greatest foe. But that doesn’t present much of a “world without Batman,” since the story ends shortly after he dies.

The next Imaginary Story to feature Batman’s death is 1969’s World’s Finest #184, “Robin’s Revenge,” by Cary Bates and Curt Swan. Here, a villain known as The Automator kills Batman, a funeral is held for the hero, and Robin must find a way to go on without him. By the end of the story, Batman is revealed to have survived, but it still does present a world without Batman while he’s believed to be dead.

I think the most solid answer to your question, though, is 1979’s Adventure Comics #462, “Only Legends Live Forever,” by Paul Levitz and Joe Staton. Set on the Pre-Crisis Earth-Two, this story features an older Batman pulled out of retirement one last time to fight a petty criminal named Bill Jensen, who was given supernatural powers by an evil sorcerer called the Soul Thief. The Batman of Earth-Two finally died in his fight with Jensen atop Gotham Towers. From then on, every comic set on Earth-Two until Crisis on Infinite Earths presented a world without a Batman.

Detective Comics #347 could be another candidate for that list. “The Strange Death of Batman” by Gardner Fox and Carmine Infantino. Another Imaginary Story and it was released just two months after World’s Finest #153. It’s short, and essentially an alternate ending rather than a full-fledged story in and of itself, but we do get to see some of the post-death world, including the Justice League’s reaction and Robin taking his revenge.

Hello @Hubcityquestion,
I’ve read a bit of Detective Comics #441, nice to see Detective (Harvey) Bullock making his first debut, I was suprise to see that Batman already know him without a introduction.
I really like how the character of Bullock was already being developed, not liking the bat one bit.
Over the years has Bullock and Batman ever became good friends like Batman is with Gordon? Thankyou.

Bullock’s never really trusted Batman, and that’s part of what makes that character so interesting. If he ever warmed up to Bats like Gordon has, then he’d just be a lesser Gordon. It’s that conflict that keeps the dynamic fresh.

In Justice League of America #121 which is part two of story that involves Adam Strange it is stated that Adam will die instantly if he sets foot on the earth’s surface. This is due to Sardath making it possible for Adam to remain permanantly on Rann by removing the zeta beam radiation from his body. My question is when did this change so that he could now set foot on Earth and on Rann? 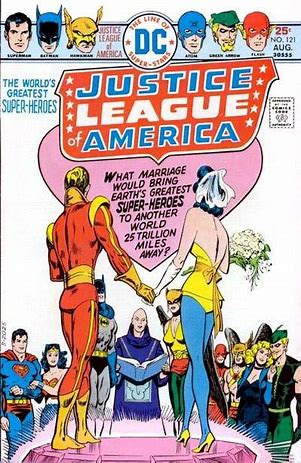 Glad he didn’t change, that really does make him a great character. Thankyou so much @HubCityQuestion, I really appreciate it.

The Ambigiously Gay Duo was first introduced on the Dana Carvey Show, in '96. It moved to SNL later that year. Played for laughs, like everything else on the show, the pair were clearly and obviously, thinly disguised versions of Batman & Robin. Having fun, with the ever present “cloud” of homosexuality that some, always saw in the stories. A couple of panels during the Golden Age, showed Bruce and Dick in the same bed together. That, and other “questionable” scenes, along with the outright sadism and cruelty depicted in other comics, helped give Dr. Fredric Wertham all the ammo he needed to assault the popular comics industry back then. Which of course lead to the Comics Code Authority, that oversaw everything from 1954 until 2011.

In all fairness to the good doctor (known to today’s readers, mostly by reputation), he was a very progressive psychiatrist in his day. He treated poor people of color during a time of heightened discrimination in the field of mental health. Much of his work was instrumental to the courts, which helped to overturn many segregation statutes in effect at that time. Most notably “Brown vs Board of Education.” Look it up. This was also part 'n parcel of his concern for the youth of America. Which in turn lead to Seduction of the Innocent, in 1953. So no, he was not quite the one dimensional “boogeyman” of our beloved comics industry, as has been portrayed. There was much more to him, than that. But, that was then …

Today of course, we live in a very different political climate. And not to everyone’s liking. LGBTQ personalities have finally been allowed to come out of the closet and the shadows. Superman and Batman are both experiencing their own personal dynamic family changes, in that regard. Even Wonder Woman is now giving credence to that background aspect of her Amazonian heritage, in various realities. Using current vernacular, one might even call them “woke” moments. Time and $ales (as always) will determine the final outcome of those decisions.

I can’t help but wonder what the well meaning (if perhaps misguided) Dr. would say about the comics world today? And what new definition he might apply to juvenile delinquency? He and all those who supported him, firmly believed, they were in the right. Sound familiar?

Adam Strange crash lands on Earth in his backup feature in Green Lantern #134 in 1980. He lives and returns to Rann in the next issue. I don’t remember the in story explanation.

Hey HCQ,
Of the first five Robins (Dick, Jason, Tim, Steph, and Damian), each one has been Batman/woman (depending on their gender, although personally, I’m with Helena, I don’t see why Steph and Carrie, and hopefully one day Maps, can’t be Batman too) in at least one storyline/alternate timeline/parallel dimension/possible future. Many of them have done it more than once, so my question is, what was the first time for each of them?
Thanks!

Has anyone ever gotten lost in a boom tube?

He and all those who supported him, firmly believed, they were in the right. Sound familiar?

Yes, it reminds me of literally everyone ever. I’m genuinely curious what your point is.

Carrie was Batman in the first few issues of Master Race and Batwoman in the last issue and its sequel, Golden Child.

Yeah, I don’t think I’m a fan of where that’s going.