Ask for my 'Hot Takes' on DC Characters!

Hi, everybody! I hope you’ve had a great start to Comic-Con@Home this week!

I have some time to kill before my first panel drops (Star Trek Universe) so I figure I can keep me (and you) entertained with a little thing that’s been making the rounds on Twitter: 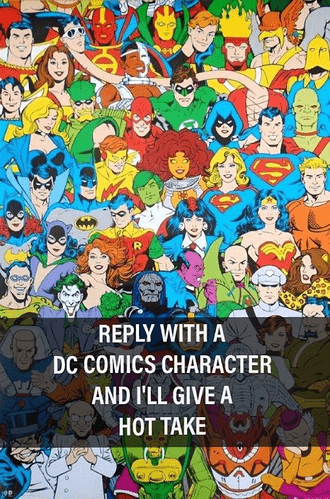 For those brave enough to find out, reply to this topic with a character and I will deliver a fresh-off-the-grill hot take!

Of the Legion of Super-Heroes? This one’s a bit tough, as I am not that much of a LOSH fan, but I’ll say this: I did like him in the 2006 cartoon. He was cool-looking character, and that’s all I needed as a kid obsessed with 2003 Teen Titans.

Lucky you, you get a twofer!

Ginger Wally: I don’t see him as ‘my’ Flash, but that’s only because I came back into comics years ago with the Manapul/Buccellato run (with Barry as the Flash). I knew he was The Flash on the Justice League show, but I was a kid then and I didn’t much care about who was under the mask.

That said, I recognize him to be an important character who could use a more unique role within the Flash family, one that isn’t so defined by his push-and-pull with Barry and even less so by the fandom fighting over who should be THE Flash.

NuWally: Same deal, kinda. The further he gets away from Ginger Wally’s shadow, the better he is as a character (from what I observed). There was a stretch of time during the Rebirth era where different writers (Williamson, Priest, Abnett, Percy) really built out his character across multiple titles every time they used him. I would very much like to see that happen again.

Was I supposed to do just one?

I would like to see other writers push him beyond what’s been his usual stomping ground in terms of stories. I kinda liked when he was the crime lord of Gotham for five minutes, but I think we can be more creative that that.

OOOOH BOY do I have the hottest take re:Supergirl.

The Sterling Gates version of the character (popularized and mainstreamed by the CW series) is monstrously bland and uninteresting, and if there is one character who needs a top-to-bottom shakeup (stopping just short of a factory reset), it’s her.

It keeps showing up in sparks and flashes (particularly in other mediums) and we keep seeing potential for it from writers like Jeph Loeb, Michael Green, and even Steve Orlando (despite his run being heavily influenced by the CW show), but there’s a version of the character that is far more complex, far more dynamic and far more fun to read about than what has become the default take on her (a perpetual ray of sunshine).

I’m knee-deep in panels, so I can’t do Cassie and Cissie right now, but I will get to those at some point. I have so many other thoughts about what Supergirl should be, but I’d be here all week!

@BCDC I’ve always been a fan the way Morrison portrayed her in Final Crisis. 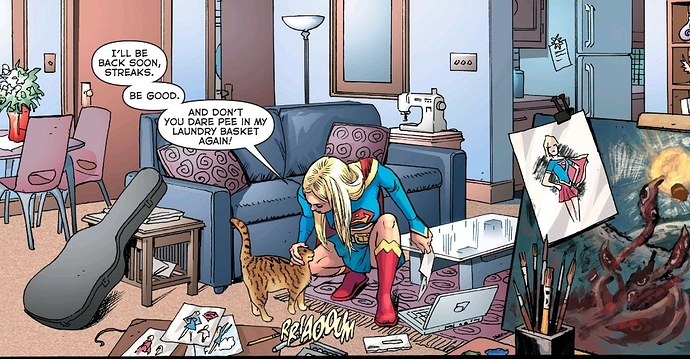 One panel, and she already felt more well rounded and like her own character than she had in years prior. She sews and designs her own costumes. She plays guitar, and probably writes her own songs. She paints.

His superhero costume seems a little at odds with the general tone of most of the stories he’s in (horror/supernatural).

We had kid/teen Darkseid in the comics for like 10 seconds. Such a waste of an opportunity to not have that version of the character run wild in the DC Universe.

Jarro is the best thing to happen to that character.

One does not go for Sterling Gates.

The Supergirl fandom has just dispatched Doomsday to your location.

Nah. Can’t change my mind. Not even the scary prospect of getting my head bashed in by a bony rage monster will do it.

Sorry, SG fans. Y’all gon have to taste the salt and vinegar