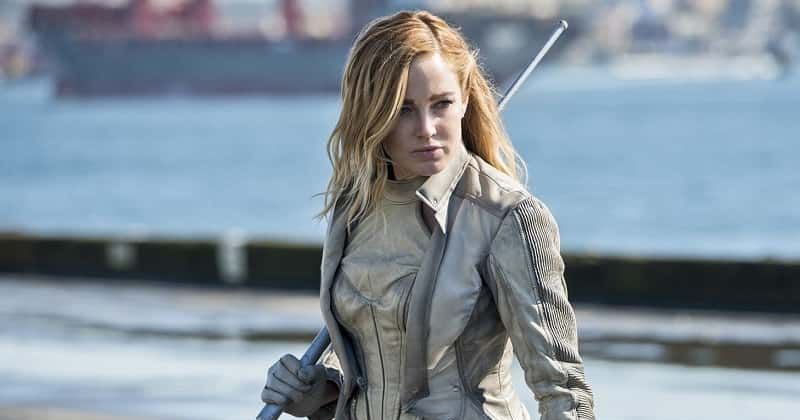 Happy Pride Month! To help celebrate Pride in June, the Arrowverse Couch Club is highlighting some of the best characters in this universe who fall under the LGBTQ+ banner. Whether they started out in the comics or were created specifically for TV, these iconic characters have played big roles in their respective shows, allowing many groups of people to better see themselves among these heroes always working to save the day. Every weekday during Pride, we’ll be highlighting a different LGBTQ+ character from the Arrowverse, providing a topic to share what we love about the character, favorite moments and more!

To kick things off, let’s start with one of the first queer characters in the Arrowverse who has the most screentime in this group, Sara Lance a.k.a. White Canary! Beyond being the first openly bisexual live-action superhero, Sara has the distinction of simply having one of the wildest journeys in the entire Arrowverse. From presumably going down on the Queen’s Gambit while sleeping with her sister’s boyfriend, being trained as an assassin, recruited as one of the original Legends, taking over as captain of the Waverider, dying multiple times and ultimately becoming the Paragon of Destiny, Sara has truly seen and done it all. And now, alongside her team and especially her fiancé and co-captain for life, Ava Sharpe, she continues to protect history from all manner of threats…just as soon as she gets rescued from being abducted by aliens, that is.

yay, sara is one of my favorite charcters, also at this point I’m like 90% sure sara is immortal, I mean she has died and come back like 10 times

Sara Lance should be in the comic book world. Lotz and the Arrowverse have made her a well-rounded, kickass character.

also at this point I’m like 90% sure sara is immortal, I mean she has died and come back like 10 times

She’ll die eventually, but at this rate, it’s probably not gonna be for quite a while. My hope is that as a clone, Ava also has an extended lifespan so that the 2 of them can still grow old together even when they’re both well over 100

Sara Lance should be in the comic book world. Lotz and the Arrowverse have made her a well-rounded, kickass character.

I’m kind of surprised she hasn’t been worked into the comics at this point. Being 1 of the fixtures of the Arrowverse and 1 of its faces for years now, she’s definitely earned a place in the DC Universe proper. It could be an interesting twist to find out that Black Canary has a long-lost sister or something

Arrow developed a couple of original characters that seemed to force their way into bigger roles between Lotz’s performance and the White Canary/Sarah Lance character, she just had to be brought back, and to headline a show at that.

And the fact that she’s an original character makes her an even better fit for Legends. Between her, Ava, Gary and Spooner, nearly half the main roster is made up of characters created specifically for the Arrowverse The original Sara from Arrow’s Pilot should be credited here in addition to Caity, and that episode should be listed as being the character’s debut.

I get that, but Jacqueline MacInnes Wood only ever shot 1 scene as Sara and made so small an impact on the character that she was instantly replaced as soon as the writers decided they actually wanted to bring her into the fold. Caity Lotz is the only actor who’s spent any sort of significant time as Sara, so it didn’t feel right to mention anyone else here