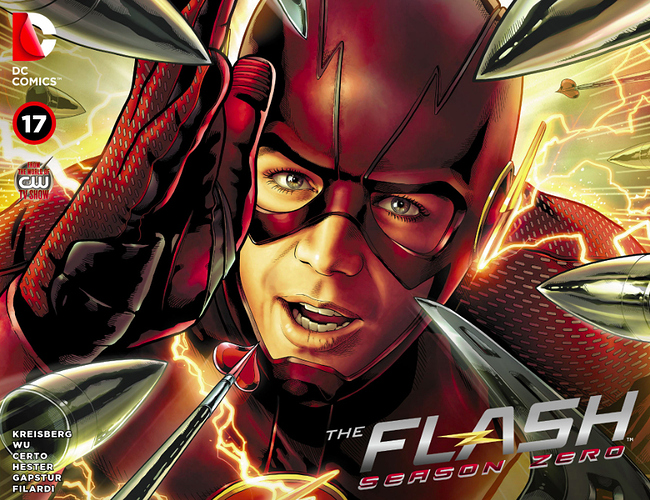 In this installment of the Arrowverse Couch Club’s monthly book club, we’ll be returning to The Flash: Season Zero to check out an arc featuring both King Shark and the Suicide Squad! While this version of the character was ultimately retconned out of existence by the show’s version of Shay Lamden, it does still offer an interesting look at what could’ve happened had his Earth-1 counterpart survived under different circumstances. We’ll also be tackling a couple emotional one-shot stories as we get closer to the Arrowverse’s return on the CW, so be sure to dive in and join the discussion!

With this being sort of a “What If?” type of story showing Earth-1 Shay Lamden surviving the particle accelerator explosion, how did this alternate King Shark compare to the Earth-2 version we saw on the show?

It’s interesting that until season 5, this version of Lamden actually seemed more developed, as this at least showcased some of his desperation in allowing himself to be experimented on and his conflict w/ resisting the new urge to eat people. In the show, Shark mostly just came across as a powerful beast, at least until Tanya Lamden and the metahuman cure came into play. Seeing him revert back to his human form, express regret for his actions as King Shark and then choosing to go back to that form permanently to stop Grodd really elevated his character in my eyes. So looking at them overall, I’d say I preferred Lamden on the show, though I appreciate the effort to give him some different development here in a limited amount of space, even if he did end up being an ARGUS asset in both continuities

I also just prefer his look on the show more. Granted, that does have the advantage of 3D CGI over pencil and ink, but I’ve gotta give credit where it’s due. Lamden did look cool in some panels, but there were others where he gave off kind of a Left Shark vibe 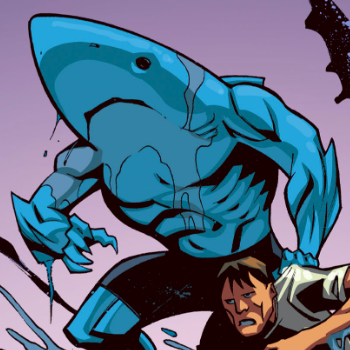 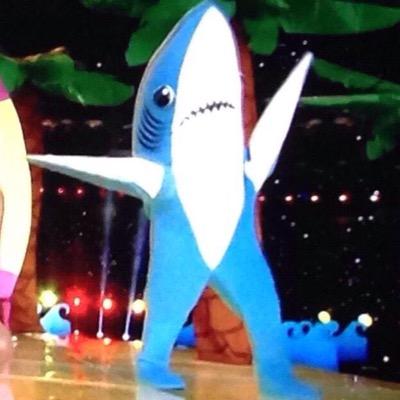 Considering that this story didn’t have any continuity errors w/ the show, unlike most of the other issues, this can be seen as canon, and so I think there’s some real potential for it to be brought back into the fold. Given the way the issue ended, it seems like Team Flash knows about this part of her life, and while they might’ve kept the Pentagon from going after her for a while, it’s still a lingering issue that could always find a way back into their lives. Even if it’s just as a single subplot, seeing Caitlin having to deal w/ this part of her life again, especially now that she has Killer Frost, could provide some extra intrigue

Which type of story format did you prefer here: the full-length arc or the one-shot tales?

While I generally prefer longer arcs for the buildup and payoff, I think the one-shots actually worked better here. Even though they’re more restrictive in a digital-first format considering the smaller page count/size, I think that makes it all the more impressive when a writer can pull off a surpassingly emotional or heartwarming story like these last two issues did. I especially enjoyed Phil Hester’s turn at writing, as it made me really wish we could’ve seen Black Star on the show, though that’d be pretty unlikely considering how that issue ended. I’ve only read a bit of the stuff he’s written, as I’m still mostly just familiar w/ him as an artist, but I’ve been impressed by it so far, and this definitely made me want to seek out more of his written works

If the Suicide Squad (Ghost Initiative) were to be restored in the Arrowverse, which villains would you want to see as part of the team?

There’s a lot of available villains that could make up a new Task Force X, so I tried to stick to ones who are still incarcerated (as far as we know), and try to showcase villains from different shows as sort of a “best of” type of group. Here’s the lineup I came up with: Cupid, Agent Liberty, Nocturna, Weather Wizard, Silver Banshee and Giselle Cutter. Cupid could take Deadshot’s place as the returning Squad member, Agent Liberty’s tactical knowledge could allow him to be the field commander, Weather Wizard and Silver Banshee would give the group a powerful kick and allow us to see more characters we haven’t heard from in a while, Nocturna could give them a better edge on stealth and Cutter could be the outside hire brought in on the promise of payment instead of not getting her head blown off

If that were to happen, how do you think it could be justified from a story perspective? What would the setup of season 9 be?

Given Oliver’s incredible sacrifice at the end of Crisis, I don’t think I’d want to see him get resurrected and potentially undermine that moment. What I think they could do instead is treat the season sort of like a miniseries in its own continuity – one of the post-Crisis earths that features a comic-accurate Green Arrow. Seeing Amell w/ actual blonde hair, a goatee and making consistent wisecracks could be amazing. They could also bring Katie Cassidy back to not only have her be a faithful Black Canary, but also do a proper Oliver-Dinah romance (though it’d probably upset the Olicity shippers), along w/ a number of other actors. Hell, I’d love to see John Barrowman get Merlyn’s spiked hairdo from the comics. An accurate Count Vertigo who’s actually a European count w/ powers instead of just a local drug dealer would also be high on my wish list. There’s a lot of potential w/ a setup like that, and while it’s certainly not a necessity, I think it could be a lot of fun to watch. Take a page from Stargirl’s book and realize that you don’t have to treat everything all dark and grim – just some things

With this being sort of a “What If?” type of story showing Earth-1 Shay Lamden surviving the particle accelerator explosion, how did this alternate King Shark compare to the Earth-2 version we saw on the show?
The show had the more tragic choosing to revert back. These books, he chooses to stay on the Squad. If it were not the same name, more than one shark related metahuman would be weird but not wholly unheard of. There was more than one canary cry. But the same name on the show and the books implies the same character. I wanted there to be more than one, but i just blew up my own theory.

The Black Star one-shot gave us a look at some covert government work Caitlin was involved with years before the show. Would you want to see this previously unknown part of her backstory possibly get more attention on the show?
It would be another way to introduce metahumans onto the show. and the outcome of Black Star can be made reference to as a dark moment blahblahblah…

Which type of story format did you prefer here: the full-length arc or the one-shot tales?
I think the one shots because there are less cliffhangers,

If the Suicide Squad (Ghost Initiative) were to be restored in the Arrowverse, which villains would you want to see as part of the team?
I think i have to think about this one,

Though it seems incredibly unlikely that it’d actually happen, Stephen Amell has still been making headlines recently for his apparent commitment to making a 9th season of Arrow if the CW ever wanted it. If that were to happen, how do you think it could be justified from a story perspective? What would the setup of season 9 be?
If he is The Spectre, i think it would be weird

There was more than one canary cry. But the same name on the show and the books implies the same character.

This is definitely an interesting idea considering it wouldn’t be the 1st time different characters took up the same mantle. But yeah, having them both be Shay Lamden and also both be King Shark are similarities that can’t co-exist in the way that Dinah and Earth-2 Laurel can both be Black Canary

It would be another way to introduce metahumans onto the show

I hadn’t thought about it like that, but I feel like this has some potential. Like we find out the government’s been working w/ dark matter since the Black Star incident, but something goes wrong (like always) and more people become metas. It’s not the most original idea, but in addition to giving Caitlin some more attention given her prior connections, it could also add some espionage/thriller elements to the show if they’re also going against covert government operations