Around the Globe with Batman: The World (Part 2) 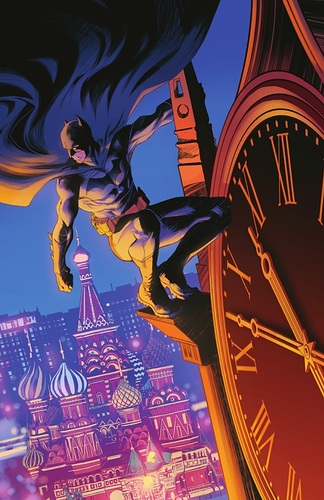 Pack your bags! It’s time once more for our transcontinental journey with Batman: The World . Comic books are more than a genre. They’re a medium of expression with which every nation has their own unique relationship, and one which is used by each of those cultures to express themselves in a way that represents their aesthetic and cultural values. Using the global icon of the Dark Knight, Batman: The World is a special opportunity to shine a light on the vibrant differences between our cultures by looking at how each of them addresses a Batman story in their own way. On this leg of the trip, we’ll be taking a closer look at some select contributors from Eastern Europe and Central Asia. Onward!

Over the cultural barriers of the Cold War, interface between American and Russian comic traditions is a relatively recent phenomenon. However, one of the very first artists in DC history, Matt Curzon, originally hailed from Russia, as did (far more recently) Alina Urusov, illustrator of some iconic covers for Birds of Prey and Teen Titans GO!

Like many European cultures, the first known examples of sequential art in Russia are dedicated to religious iconography, translating events from the Bible into pictorial form. 17th century Russia saw the rise of the lubok, which were wood carvings, copper engravings and lithographs depicting popular folk stories and sometimes even cartoons, which verged on political. It wasn’t unheard of for these lubok of text and images to be bound together in collected forms, thus providing us with a very early example of the comic book. By the 20th century, the lubok had faded from Russian popular culture, though its iconography and themes endured in political posters and messaging. As a growing Communist regime began to enforce strict rules over Russian culture, some Russian emigrants to neighboring countries kept their traditions and folk stories alive by continuing to illustrate them in comic form. In the 1960s, children of Soviet Russia were introduced to single page comic stories in magazines such as Koster, but comics as a whole wouldn’t find open acceptance in Russia until the waning years of the Soviet Union. The Russian comic anthology Mukha arose in the ’90s, providing a platform for Russian artists to express themselves through the form. Folk tales and fairy tales continue to provide a strong influence on Russian comics, as does post-Cold War tensions and anxieties in horror tales which echo Chernobyl and the ever-present threat of nuclear war.

To learn even more about the different countries represented in Batman: The World, head over to DC Comics!

Which country’s representation is your favorite in Batman: The World? Let us know in the comments!