Are You Ready For A Black Batman?

As always with Bleeding Cool, take the following article with a grain of salt:

Speculation is already running rampant - many think that this is an indicator that Bendis is indeed taking over the Batman writing duties after Tom King’s departure, for instance. Guesses for the new Bat range from Black Lightning to Luke Fox to Charlie Bullock (Blackwing from Earth 2 - yeah, that’s a deep cut).

New character? Old character taking up the mantle? So many possibilities…

Eh, it doesn’t bother me. As long as he’s not in a mech suit, that is.

I think a silo of salt is more necessary for this one.

But we just did the substitute Batman! I’ve found diminishing returns with the gimmick since Knightfall.

That could be a wonderfully lucrative publicity stunt (which won’t go anywhere). I could see milking five or so issues out of it at most, so that means we’ll get at least twenty.

I think someone can take over and become Batman, Batman is just a man in a costume. Dick can be Batman Damian could become Nightwing. It’s weird but I’d like to think Damian would be a fun Nightwing.

On this Batman, I think it would be fine but it would have to be someone we’ve met already. Becoming Batman a year after their debut would displease many fans. I think either Duke (which the article says is a no) or Lucius are the only two viable options to make this work on Earth-One.

Sounds boring and lazy too me, is Bruce Wayne still gonna be Batman???

Oh, I know! What if Batman was a ginger?! Think of all the ridicule he must have indured as a child! That must have driven him…

Honestly, having Bruce Wayne step down (like in Batman Beyond) makes for a very interesting story. But, like Batman Beyond, there’d have to be some permanence to it.

Throwing away continuity every six months is destroying the audience.

Being that that article originates from Bleeding Cool, can it be taken seriously?

BC do have some times where they are on the mark. They predicted Nick Spencer writing ASM for Marvel like a whole year in advance.

For every click bait gossip they have they also tell some impressive truths.

I don’t understand it either hahah

Their batting average is decent enough that I could imagine this is/was talked about at some point.

I’m a Batman fan because I like Bruce Wayne as a character. I’ll be less interested no matter who is under the cowl. I’m not going to be screaming in protest all over the internet, I would just rather have Bruce Wayne stories. I’ll give it a chance, but I doubt I’ll keep buying the book.

Honestly, I’ve always wanted a Bruce Wayne Batman story that focused on him working in/with black neighborhoods. Fighting corruption, police brutality and the shooting of unarmed black men. Kind of what Murphy touched on in White Knight, but even more so. Think there’s lots of story potential there to explore current issues. There have been small stories that did this in the past, like Batman: Turf, but a lot has happened in the world since.

This news is a little more disappointing since I haven’t loved any of the main Batman titles since rebirth started. There hasn’t been a classic feeling Batman book in the main continuity in years. And it looks like that’s going to continue. Thank goodness we have Black Label.

Also, I think this concept could be more interesting as a Black Label book. Make the Waynes black and explore the differences in Bruce’s road to becoming Batman without the benefits of white privilege. That’s a story I’d definitely be excited about.

I’m tired of any comic book replacing the original character. It is a plot device that’s been way overused.

Bruce’s road to Batman without white-priviledge? I’m assuming you mean, no butler, no fortune, no training from the world experts in martial arts, no super-technology and state of the art equipment.

I agree that’d be an interesting premise. But it wouldn’t be Batman anymore. It’d be something closer to the Punisher. It’d be a vigilante who grew up without means, in foster homes. A kid watched over by state-paid therapists who never noticed a deep all-encompassing drive for revenge. Now, it sounds closer to Dexter.

I disagree. And a black man/family is just as capable of achieving all those things, it’s just more difficult. I’d like to see the Waynes killed in a different way. Maybe by police in a race riot or protest? Still a successful couple with influence. Just a little more grounded, self-made, and living in a neighborhood with a culture, rather than a mansion on the outskirts of Gotham. Alfred is a family friend or brother who is left in charge of Bruce. Heck, maybe make him an aunt/female in this iteration. Batman could be more focused on his neighborhood, fighting police corruption and local gangs. He starts recruiting teenage Robins as a way to keep the gangs from getting to them.

As an aside, Batman is still Batman without his wealth and I wish that was explored in more stories. Batman is made by his will, drive, and obsession more than his money. Modern stories have just taken that aspect too far, with robot bat-suits, fleets of Batmobiles, and bat-rocket ships.

I heard someone suggest Black Lightning which would be REALLY cool.

Is everyone forgetting we already got a black Batman?

[side-mouth] Which has been reviewed on today’s episode of “Taking Issue”, on YouTube now!
Who said that? 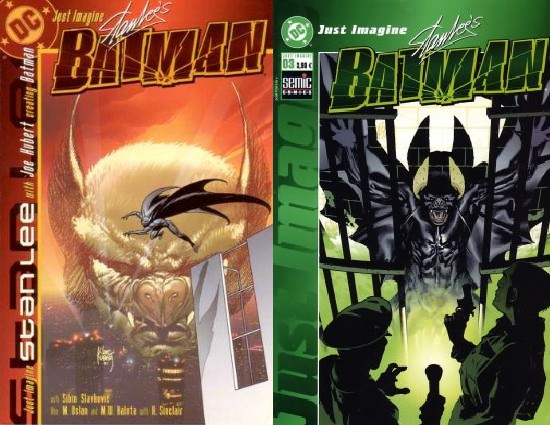 (I’m thinking DC would have snatched the Spider-Woman trademark, personally.)