Are there Gotham Academy fans here?

Hey need a place to talk about Gotham Academy? I sure do! Who is your favorite? Do want more of the comic? Where do you think the story should go? Should it be a show? 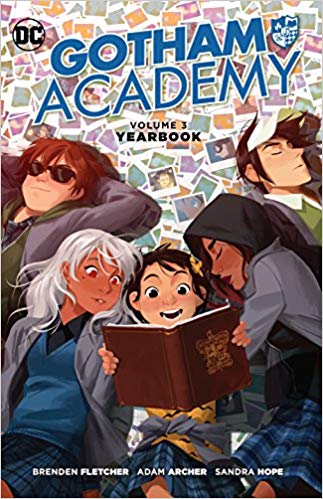 A Gotham Academy cartoon has the potential to be all kinds of wonderful fun. It’d make for a great DCU Original show.

I’d watch the heck out of a Gotham Academy cartoon as well. I think there’s a lot of potential for fun and mayhem with a show like that and with the characters involved. My favorite character is Maps and I would really like to see more of the comic. It was a breath of fresh air to me and I really enjoyed it a lot. As for where the story should go I’ve no idea but surely there are other mysteries to solve at the Academy now that Olive’s is solved.

I agree! A cartoon would be so cool. Gotham is place full of mysteries and Gotham academy would be such cool place and expand on the lore of Gotham city. Also the characters are just fresh and adorable!

I love this series. I’ve been hoping for an animated show ever since I first read it.

i agree i would watch an animated show

I think i only read the first arc of the series, but I remember really liking it. And it is a pretty solid idea/premise for a show, animated or live action.

Reread this series last night, and it’s a really underrated gem, though I think it would have been much better if they’d released it as four graphic novels rather than trying to make it an ongoing with both art and writer shifts. And the attempt to tie it into Robin War, while understandable, really didn’t work very well.

That being said, the art shift wasn’t as jarring as I’d remembered, largely because of the consistent painted coloring by Myssyk. And the plotlines are all clearly organic, even if sometimes there’s a bit of a head scratcher on some of the actions.

So many truly beloved characters and ideas here, especially Maps and Katherine. Really glad that we’re getting small pieces in things from Immortal Wonder Woman, Batman Black and White, and now the Batman 119-121 backups.

Would be wonderful to see a new ongoing series. And a live action adaptation!

Or heck, a Webtoon!