America is in the midst of a devastating Atlean conspiracy, two people have come together to put a stop to the danger: Arthur Curry and Jackson Hyde! Aquamen, a new ongoing comic book series by the creative team of Chuck Brown, Brandon Thomas, Sami Basri and Adriano Lucas, will launch out of the conclusions of Aquaman: The Becoming and Black Manta this month! 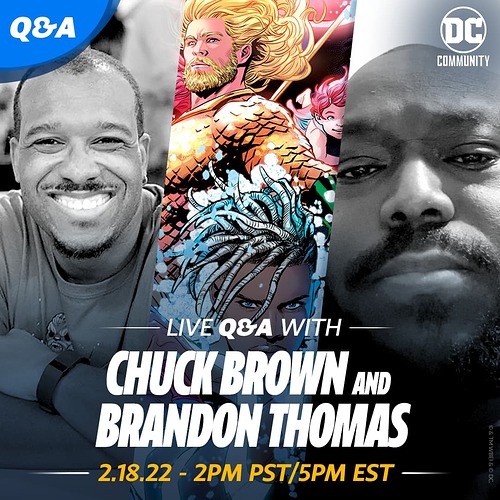 And to celebrate its upcoming release, we’ll be joined by Aquamen Writers Chuck Brown and Brandon Thomas! Join us on 2022-02-18T22:00:00Z→2022-02-18T23:00:00Z as Chuck and Brandon answer all your burning questions! Want to know more about the process behind writing a new ongoing series? Curious about the evolution of Aquaman over the years? Want to ask how often Aquaman loses his trident in the ocean?? Only one way to find out…see you on Friday, Feb. 18! 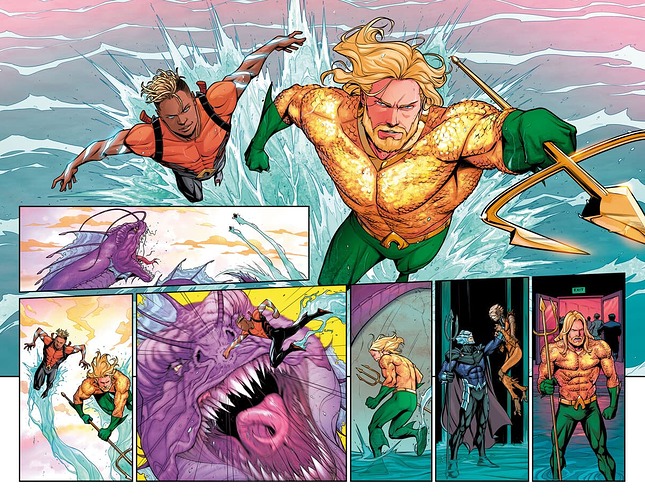 Please limit your questions to just 1 per user, so our guests can answer as many questions as possible. Thanks, and see you next week for 2022’s second Live Community Q&A!

Aquaman is such an underrated and underestimated character. How do you plan to show he really is an amazing character/asset?

My question is if Aquaman is dead due to the events in JLA, how can he be in this comic, just kidding. My real question is by the title it appears you will have two leads for this book, Aquaman and Jackson what do you do as writers to make sure both characters are heard and depicted equally in the series overall or is that not a goal you concern yourselves with in this series.

Thank you both for coming to join us!

Chuck: I’d like to ask about Black Manta’s background. In the 2003 Aquaman series, Manta was given a backstory showing that he was born with autism. This was a controversial storyline at the time, particularly in how Black Manta’s autism was depicted, and has since been pretty absent from depictions of the character. Today, it’s difficult to find any representation of autistic characters in comics, and even the more problematic depictions, such as with Black Manta, have been erased, as opposed to corrected. Is Black Manta’s autism a part of your foundation of the character? If so, how does that express itself?

Brandon: Jackson Hyde’s graduation from Aqualad to Aquaman is welcome, but it does feel like we’re skipping over the middle child a bit – the first Aqualad, Garth, now Tempest. What role will he have to play in the Aquamen dynamic?

Hello Chuck and Brandon,
I love Aquaman since I was a kid, in fact I’m more of the 90s Aquaman fan, since he has a long hair with a beard, any chance of him having a hook and wearing a armor like he did in the 90s? I even had a toy of it.

Thankyou so much for your time.

The AquaFamily over the past few years has become one of my favorite families in the DCU. Exited to read more of them in this upcoming series. How do you think they compare to other DC Families?

Hello ty for joining us!!!

I can’t wait to read this series. Love the sketches I’ve seen, especially Mera & Tula. I’m probably in the minority, but I’m excited for Devil Rays return. What made u decide to bring him back? - & ty for doing so. Looking forward to the series. 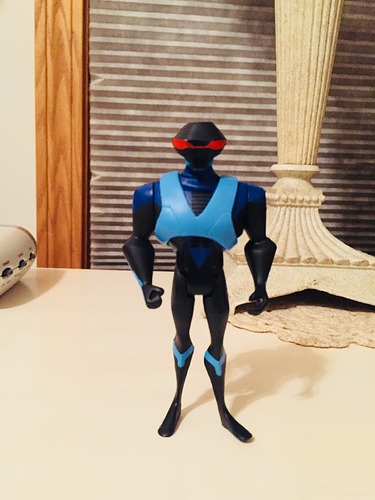 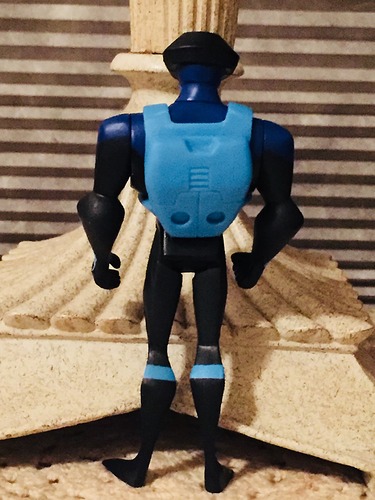 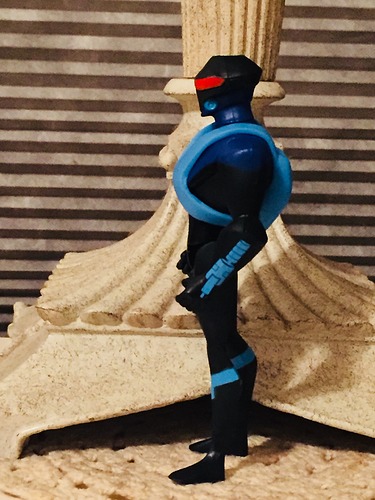 Also, I’m a huge Olympics fan. Since it’s The Winter Games (& Summer Olympics would be too easy) which event do u think the Atlanteans could medal

in, or be best suited for?

This is awesome! I’ve been getting both ‘Aquaman: The Becoming’ and ‘Black Manta’ from my LCS and have loved both. They’ve been teasing ‘Aquamen’ and I’m ready for that to begin.

One question is going to require some thought - I’ll edit this later to add in whatever I decide on but for now thanks to the DC Community and @Jitsu for making this happen and HUGE thanks to Chuck Brown and Brandon Thomas for taking the time to join us and answer some of our questions!

Aquamans abilities have been fleshed out over the years, it’s not just talking to sea life any more but being able to see in low light, super strength that translates to super jumping, and bullet proof skin to name a few. His trident seems to be a different story, we have seen tridents that control lightning, the trench, and allow water manipulation to name a few. Does the trident Arthur wields in your run have any abilities?

are there any plans to reference (or hopefully cameo) some of the other relatively minor aquaman characters like koryak and arthur joseph, or that weird pocket universe aquababy who became a child and may or may not be arthur’s?

Hey Chuck and Brandon, I loved both your mini books for both Jackson and Black Manta.

Will we see more of Jackson’s personal life outside of heroics? Like his school life, friends, what he likes to eat and etc?

Hi Chuck and Brandon, in Aquamen, will we see more of The Lost Tribe established in Black Manta and the lore surrounding them? We already knew Jackson had Xebellian heritage, but through Manta he’s descended from the Lost Tribe too…

Is there a chance we could see Lorena Marques, Aquagirl, again?

I have so many questions but let me start by again thanking both of you for taking the time to do this and for @Jitsu and the whole crew at DCUI for making this happen. Stuff like this is so fun and so cool and it makes being a subscriber here so rewarding. Thank you all.

Question - What’s the process for including something like the Secret Sanctuary at Happy Harbor in these books? I, like Jackson, had never heard of it before but it being the former headquarters of the Justice League of America do you have to get permission to use it and then once you’re going to include it how do you go about determining how it’ll look and what Easter eggs/references you can include both in the story and visually? Did you create “Trapdoor” and, if so, how did you come up with the locations you used in ‘Aquaman: The Becoming #2’ for Jackson’s teleportation from coast-to-coast?

Is there a chance we could see Lorena Marques, Aquagirl, again?

Agreed ty @Jitsu for getting this done & to our guests for making time in their busy schedules. I thought these might’ve been done. So happy there back. Love chatting with the talent.

Hi Chuck and Brandon, in Aquamen, will we see more of The Lost Tribe established in Black Manta and the lore surrounding them? We already knew Jackson had Xebellian heritage, but through Manta he’s descended from the Lost Tribe too…

CB: Short answer is yes! We’re in the early stages of planning out the storylines…so anything is possible!

Will we see more of Jackson’s personal life outside of heroics? Like his school life, friends, what he likes to eat and etc?

BT: Yes! We’ll be diving deep into Atlantis in some very cool and exciting ways, and really want to ensure it feels like a real place with real people living there. Jackson, and his continued struggle to find a place for himself there and Xebel will be a big focus going forward.

are there any plans to reference (or hopefully cameo) some of the other relatively minor aquaman characters like koryak and arthur joseph, or that weird pocket universe aquababy who became a child and may or may not be arthur’s?

BT: Not initially, but the longer the book exists, the more we’ll keep digging into any and all interesting corners of the Aquaman mythos.

Hey @Aquamen.QandA - love the term “second mother”. Not sure if y’all came up with that or not but I loved it the second it hit my eyes.