Aquaman Ongoing Series Discussion: Reign of the King of the Seas Issue 57 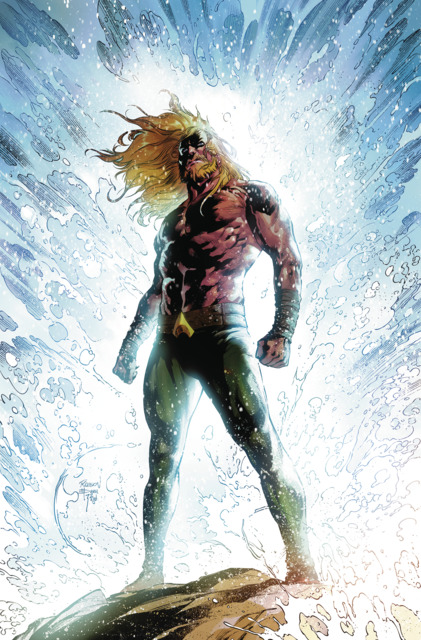 image421×640 147 KB
Formerly the thread about Aquaman #50, it’s now the place to discuss Aquaman’s ongoing comic series. Stop by as you read he’s issues or those here on DCU and join in the conversation.
This has been great age for fans of Arthur Curry. A title that last saw greatness in the 90s was revived by Geoff Johns who managed to highlight Aquaman’s humanity and humor while demonstrating his unique role as both superhero and ruler of a sovereign nation. John’s exploration of undersea politics was carried on admirably by Dan Abnett whose run was marked by The Aquaman leading a rebellion of the Atlantean dispossessed.
Kelly Sue DeConnick’s run is relatively new, but readers have every reason to be optimistic. While her initial issues offered a slow build of an Arthur who has literally forgotten who he is, that adventure has lead him back to Maine with a cast of sea gods and the potential for another memorable run of stories. In #50 DeConnick juxtaposes humor with the promise of horror, the personal and the political, and Arthur sitting and talking with his friend Diana. Rocha, Henrique, and Gho come through with art that reminds the reader of a great fantasy story. DeConnick has taken on the task of following Johns and Abnett, and so far is more than up to the task. 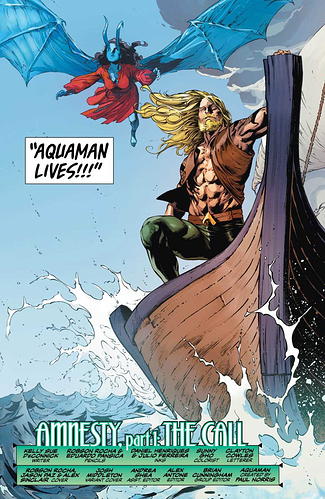 I was wondering how long they were going to draw out the amnesiac Arthur plot. I’m glad it’s over and we can get back to having him actually be AQUAMAN again. I liked Mera’s simple solution to the whole “You need a husband” sideplot. Clearly she still has feelings for Arthur but just to ensure the kingdom’s stability, she’ll “marry” Vulko and keep everyone out of her hair. (On the other hand, I think the Widowhood will eventually become a problem that will need to be addressed in some future storyline)

Golddragon agree DeConnick’s first arc probably went on an issue too long, but I really liked where #50 left us. And, you know it’s a good book when the political machinations hold your interest.

This issue was pretty interesting, I’m excited to see where it goes from here, it’s also good to see Black Manta come back.

Alex, I didn’t even mention that important character appearance! DeConnick came into this series with a plan.

I am thoroughly enjoying Kelly Sue DeConnick’s run. It is pulling me in completely and I feel immersed in the world. It’s giving me a sense of escapism that I have been missing from some of my books but at the same time it still feels grounded in itself. I also completely agree about your comments on the art. Fantastic and makes you feel like it is a wonderful fantasy epic.

Issue 51, not a bad guy or critter in sight until the last page of the main story and it’s still an engaging, fantastic read. The supporting cast really shines, particularly Jackson Hyde. And I know Callie is blue, has leathery wings and long horns but she is cute.

Haha yeah, Batman has been quite the ride lately.

What’s everyone’s opinions of the new annual? Personally i thought it was a nice break from all the year of the villain seriousness and had nice lighthearted humor. It also helped to give the sea gods some character. Hopefully they’re at least recurring characters if not new members of the aquafam. Also can we appreciate how good a boy salty is? [RCO032_1571867973]

@msgtv, are you still liking this run? I bailed after Drowned Earth. would you say its worth buying or waiting till it gets on DCU?

Hmm, I really enjoyed Abnett’s run particularly Throne of Atlantis, but sounds like that’s where you basically dropped out. Kelly Sue DeConnick took it in another direction, introducing a new pantheon and injecting more humor in the book and now Jackson Hyde. I’m a big fan, but I think her run starts next issue here on DCU so check that out, though her run starts at a slower pace.

Give the next issue here a try, if nothing else the art is beautiful

I hear ya brother, bet you’d at least enjoy flipping through it. It really looks great.

And by next issue, I mean the next one that drops here. That starts DeConnicks run