Aquaman: King of Atlantis Is Weird and Wonderful 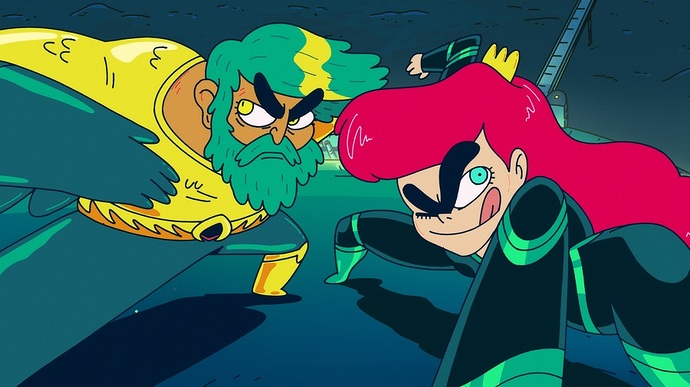 Aquaman and Mera are back in the most wonderfully weird way! Throw any expectations you have about Aquaman into the ocean because you’ll never guess what your eyeballs are about to see next in Aquaman: King of Atlantis . The three-episode animated series, which wraps up today with its climactic final chapter, is an action-packed frenzy of butt-kicking, bright colors and bubbles. Even if weird or purposefully silly isn’t usually your thing, we still suggest diving headfirst into Aquaman: King of Atlantis . It’s absolutely see-worthy.

Following the events of James Wan’s Aquaman , chapter one of King of Atlantis begins with Aquaman’s first day on the job as ruler. He’s got his girlfriend Mera and advisor Vulko at his side, but things don’t get off to a great start. The awkward Atlanteans aren’t quite sure what to make of their outsider king. Never one for ritual and tradition, Aquaman leaps at the chance to run (swim?) away from his boring duties to investigate an outpost that hasn’t been heard from in years. Mera offers to join him and a new undersea adventure gets underway.

To learn more about Aquaman: King of Atlantis, head over to DC Comics!

Have you been watching Aquaman: King of Atlantis? Let us know in the comments!

Alfred and I will watch it someday soon. (OOC: Aquaman is dad’s favorite hero).

I’ve watched the first two episodes and really enjoyed it. It’s not what I expected it to be when it was first announced, and the animation took a little getting used to, but when it’s moving, the action is very kinetic and cool, and it actually has just enough serious moments to work.

The voice work is great, the music is enjoyable, and the animation is reminiscent of Yellow Submarine, which works surprisingly well for Aquaman.

Maybe if this does well, it will convince WB Animation brass to go all-in on Aquaman: The Animated Series?

My son enjoyed it more than I did, but it was far from a disaster. It did seem very derivative in terms of the tone of other clever shows with intentionally- unpleasing animation. Very nice choices on the voice cast.

I have been enjoying this with my kids. The animation isn’t my favorite but it works for the show.

Im still not sure