I see him get mentioned here and there but I haven’t really seen a whole thread dedicated to the King of the Seas.
I personally will admit I didn’t give Aquaman much thought as I was growing up. I mean Batman was on everyday after school when I was growingup and Superman was the big movie star. So Aquaman was just the Fourth Super Friend.
Years later I caught the 1989 miniseries (I loved that first issue cover!) 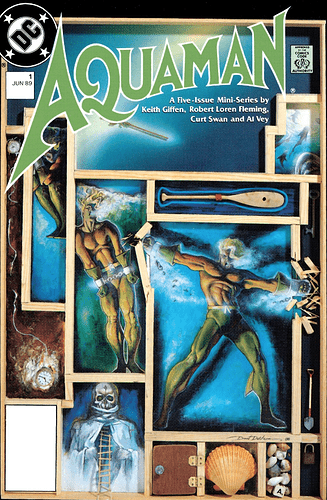 It really wasn’t until The 1994 series by Peter David that I really started reading Aquaman regularly.
Now, I was never one who considered Aquaman to be the lame duck of the DC Roster. I didn’t have much interest in him, but I never regarded him as lame or weak.
(especially after he dropped a Whale on Namor’s head and took out a White Martian just by way of his aquatic telepathy)
Lately, I’ve gone out of my way to defend the King of the Seas. (I just did so on a Godzilla fan club Facebook thread)

So Come one, come all! share your fandom of the Monarch of the Oceans.
tell your Aqua-origin stories. and lets get this party started!

It actually took me until like… this year to start reading some of his runs!

Funny story, I loooved the ocean as a kid, but an open water swim halfway around an island at a very young age left me with a somewhat ridiculous fear of dark waters. So bad that I’ve had to have other people remove me from open seas in video games. Ehem, anyway.

I’m a huge Stjepan Sejic fan, and I loved how he drew Arthur, so I started there with the Underworld. It actually helped a little bit with this phobia I’ve got. I’m still reading, slowly but surely. So it’s not much of a Aqua-origin as far as how long it’s been, but I’ll attribute a good step in the right direction (and the ability to imagine being on the ocean floor without panicking) to the King of the Seas! 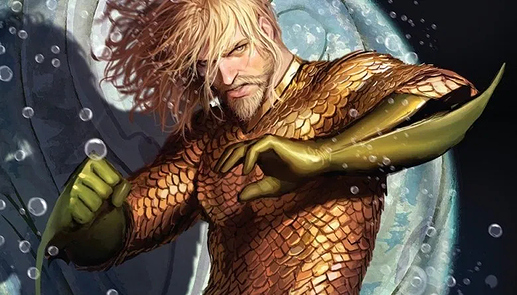 @golddragon71: You are preaching to the choir about the mighty Sea King from where I sit. I have been a fan of Aquaman since I purchased Aquaman #27 way back in the stone age of 1966. And like you, I never disrespected Arthur, and have never, ever took truck from those who disparaged him. “Oh, all he can do is talk to fish!” “Yeah. that’s right bunkie, he has dominion over three-quarters of the planet. He can talk to whomever he likes!” The character has been blessed with outstanding creators throughout the decades: Ramona Fradon, Nick Cardy, Jim Aparo, Bob Haney, Steve Skeates, David Michelinie, Peter David, Dan Jurgens, Geoff Johns, Ivan Reis, and Dan Abnett.
I think so much of The Sea KIng, it’s now time for DC to amend “The Trinity” and add a member who is very much an influential peer.

I remember thinking Mera sounded cool years ago, being disappointed with what I’d read, then ‘rediscovering’ her and Arthur in Blackest Night, which I loved. From there, I dove into Geoff Johns’ Aquaman run and have been reading it ever since (although that run is probably still my favorite).

I picked up the Peter David Aquaman #38 and have bought his series almost continually ever since.

Like @chintzybeatnik, I have also been collecting Aquaman comics since the Peter David era.

The main reason is, of course, that I think Aquaman is cool, but if I am being completely honest, I do have another reason. When I discovered that Aquaman was the butt of jokes to many comedians of a certain era, I was surprised because I had never viewed him that way, and the logic of the jokes just never held up to the logic of being a super-hero comic book fan.

Aquaman had been mocked because his powers only worked in water. When I would hear that criticism, my thought process was – so what?

Superhero comics are stuffed to the gills with characters who step up to do the right thing against all odds, including many that have no powers at all. Al Pratt was a member of the Justice Society of America and in those old 40s comics he very literally had no super powers, he was just a guy who wasn’t afraid to get in a scrap with a mask on. As comics fans, that is just about the very first thing we are asked to accept, a foundational suspension of disbelief, that a hero can fight crime, even without powers.

So, when we get a character like Aquaman who absolutely has powers, he is somehow viewed as less than that because he is not The Flash or Superman? That just doesn’t hold up. Aquaman, even during the silver age, when one could argue his powers were interpreted at their weakest levels, Aquaman still had more super-powers than Batman or Robin. He could, at the very least, fight like they fight. On top of that, he had his aquatic powers.

One of the reasons I joined team Aquaman so many years ago was to spite the trend of dumb jokes about his so-called uselessness. I knew better, and I was going to support the comics that were evidence for my case. Plus, like I said earlier, Aquaman is cool.