Anyone Read The Young Animals Imprint? Season One Or Two?

Led by writer Gerald Way, Young Animals basically was a imprint that focused on the strange, bizarre, and oddities of the DCU with old and new characters, usually going into topics the main books wouldn’t be able to go into or at least sell to a wider audience.
Series like Doom Patrol, Mother Panic, Cave Carson Has A Cybernetic eye, Shade The Changing girl were highlights in that era. 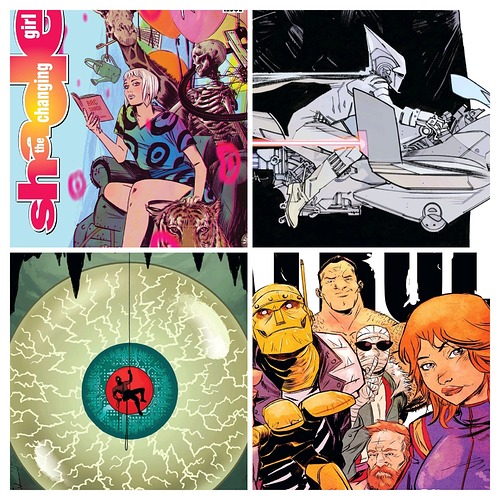 It had a crossover event called Milk Wars bringing all the books together and following up a finale for the series above in it’s “season 2” the following year With Mother Panic, Shade the changing woman, Cave Carson has a interstellar Eye, and Doom Patrol: Weight of the worlds ending the chapter for this imprint

We also had shorter but still important books to include with Collapser, Eternity Girl, and Far Sector which saw it’s main star Jo mullein, actually jump into main continuity which is great.

Anyone had thoughts on these books, whether you read the books or not, please feel free to discuss it here below.

I’ve been meaning to read Milk Wars again. I read it once at 4:00 am when I was exhausted, and I don’t remember a thing lol.

I loved Eternity Girl, although there were parts of it that I found to be a bit redundant.

I love this thread already lol! I’ll have to read more YA soon!

Eternity Girl was one of the most depressing story I read in comics and I loved it.

I think in general the Young Animal imprint felt like image books with a DC logo. I imagine this is what people loved about vertigo comics when they were around.

My favorite was Shade the changing girl and woman. Never read the original series with Rac shade, but this one felt so engaging and relatable as a teenager.

Eternity Girl was one of the most depressing story I read in comics and I loved it.

I agree. I know I’ve mentioned it on the community before, but before I got into the community and comics as a whole, I was very suicidal. Reading Eternity Girl and seeing how her death would affect the world helped to show me how many people care about me too. It also reminded me that I wasn’t alone, so it has a really big place in my heart.

I think in general the Young Animal imprint felt like image books with a DC logo.

I totally agree. Milk Wars totally gives the vibe of Scumbag, and Collapser really reminds me of Invincible for some reason lol