Batman is 6 feet 2 inches tall Huntress is 5 feet 11 inches tall. Eather Batman grew six inches, or Huntress shrunk in the wash. Huntress should only three inches shorter than batman; instead, batman is a head taller than her. Helena is about the height of Babara Gordan and Selina Kyle in this shot, meaning she would now be five foot seven inches tall. Also, is that the Shreck’s Department Store mascot in under Huntress’s arm? 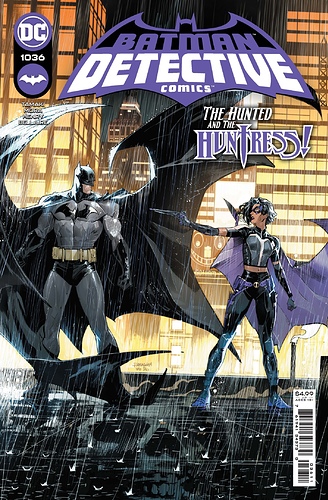 When I think of Batman covers, I immediately think of the Kelley Jones stuff from the 1990s, so I’ve just come to accept that proportions on a cover shouldn’t be taken literally.

except the proportions are the same in the book as on the cover.

im fine with height inconsistencies the what bothers me is the race thing, didn’t they make hunteress mixed? cause now her complexion varies a LOT

The only thing more inconsistent than character ages in comics is character height in comics. I think they make Huntress a little shorter to showcase she’s more of an underdog if the two should come to blows.

well originally in the new 52 it was just to differentiate the original huntress Helena Wayne from Helena Bertinelli as Helena Wayne was at the start of the new 52 limited series huntress comic but I think as of rebirth they officially made her half Italian half African American.
Jay_Kay: had a theory and Mary Elizabeth Winstead the actress who portrays her in birds of prey is five foot eight inches tall, could be why they shrunk her as they also gave her a haircut to match the film. something i have noticed happens in comics form time to time.

PS: However I also think she looks good with her hair cut in a bob.

While I have written fanfic about Huntress where her height was a very important part of her character and relationship with Batman, it’s almost universal for artists, even when they had established heights in published Secret Files, to ignore them and just draw what they think looks right in terms of heights.

Same for me…although more about her relationship with Jason todd…god, how have these two not had a team-up. Second batgirl with the second robin.

I don’t count Huntress as Batgirl, though, so I think they’re just Huntress and Red Hood. Also, not sure they would encourage each other very much. More like reinforce each other’s more self destructive tendencies.

Huntress was batgirl for a time during no mans land.

Oh, I am aware of what stories you are talking about. I just don’t think they count. Just as I don’t think Charlie Gage-Radcliffe counts.

Doesn’t diminish my love of both characters. Just don’t think they count as Batgirls.

Jay_Kay: had a theory and Mary Elizabeth Winstead the actress who portrays her in birds of prey is five foot eight inches tall, could be why they shrunk her as they also gave her a haircut to match the film. something i have noticed happens in comics form time to time.

Now that you mention it, her current outfit does feel like her classic 90s outfit filtered through some of that BOP aesthetic – the shorter hair, the inch of midriff. 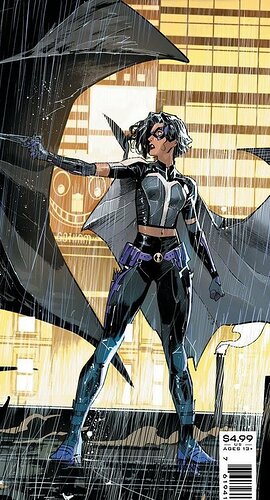 (Which by the way, can someone more fashion-forward explain the whole inch of midriff thing? Like that just makes you look like you had a growth spurt to me. But I’m just a dumb dude with no fashion sense so…

ever see ‘earth-27’ stuff? its pure fanwort but Jason Todd and Helena Bertinelli are together…and it explains huntress abb window in a interesting way. but other then tis instance she was never officially batgirl but a usurper.

I think its ment as a more practical way to do huntress’s famous abs window.

I’d agree. I appreciate all the nods to different periods of Huntress costumes in the current design.

I have also seen Earth 27 - I enjoy it, but I wish it were more directly connected to some fanfic.

Sorry I just noticed this, and Technically, Bette was not a Batgirl; Betty was Bat-girl. Barbara was the first to go by the monicker of Batgirl.

While true, that means that Huntress shouldn’t be a Batgirl either, since she never went by any moniker when she wore the bat.

True, she went by Batwoman in the one instance she was called something well in a batsuit in the novelization of No Mans Land. I have yet to get around to get around to reading the actual comics for the event.