DC Universe Book Club goal is to show off the breadth of the DCU library. But in doing so, they can’t explore full series. Announcing the Connected-Content Series!! This series will have a weekly read ahead of the release of the weekly content series. In October - December, we will be reading two series. The New Teen Titans (1980), (1984), Adventures of the Teen Titans (Hopefully), and a Hawk and Dove series. We will also take breaks to read series ahead of Aquaman and Other major movie releases.

Expect series like Young Justice (2011), Grant Morrisons Doom Patrol, and The Saga of Swamp Thing in the future during their releases.

Note: This is not a competitor of DCU book club. Read that first!

Trust me Titans episode 1 and The New Teen Titans #1 will have lots of similarities.

Also, DCU book club has a discord which will release news, the full comic rotation, and more!

Check out the DC Universe: The Book Club: The Fan Room community on Discord - hang out with 241 other members and enjoy free voice and text chat.

Also, DCUBC will announce there weekly selection on the 8th 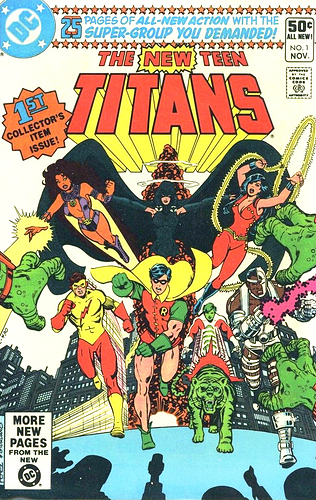 I’ve been told that the new Teen Titans is disappearing. Is that really true?

Awesome! The more the merrier. I like some of the titles and authors you mentioned, would love to dive in and discover some of those runs.

So here’s my question. I saw the post but can’t find the source