DC HEROES, the famous post-crisis role-playing game, sets the stage for the first season in which Vanessa Marshall, Clare Grant and WWE superstar Xavier Woods also join as players. Set in the same 80s era as when the game was first published, the five participants role-play as a group of high schoolers stuck in Saturday detention. As they improv their way through a variety of situations familiar to fans of beloved movies from that time period, they soon discover their destinies as the world’s greatest super-heroes.

“DC Heroes was the first RPG I ever played as a kid. It was also my introduction to the DC Universe, its Heroes and, most importantly, its rich pool of villains.”, said Prinze. “I had a blast making this series and I hope all of you love it as much as I do.”

New episodes will go live exclusively on DC UNIVERSE every Friday after the series premiere on February 28.

Will you be watching DC Universe All-Star Games? Let us know in the comments below!

Didn’t see this coming. Thanks for the info and fun surprise.

Ah, so this is what comes after Harley Quinn. I’ve never heard of DC Heroes, so I’ll be going into the first episode blind.

Oh I can’t wait! This is going to be fun to watch!

Awesome! I actually own a copy of DC Heroes!

That’s one way to handle the gap! I’ll give it a shot.

This sounds interesting and like a wonderful usage of fans that have a bit of a name behind them. Now if a season 2 happens and Freddie convinced Sarah Michelle to appear, that would be EPIC! Looking forward to this one!

Hey, this could be fun! I play the ~2012 DC Adventures RPG all the time! It’ll be very cool to see people playing around in this universe.

I enjoy watching Wil Wheaton’s Tabletop on occasion as well as other role playing online so I’ll tune in on this for sure!

I played a metric ton of DC Heroes back in the 1980’s and 1990’s! Man, I loved this game. I’ll have to dig out my old rule books and dice and modules and play along!

I wonder if they’ll use the figures that Mayfair made for the game … I was SO excited to have Titans figures at the time. 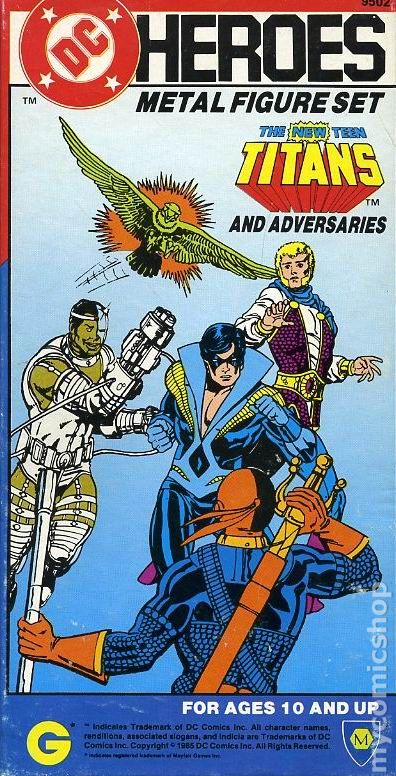 I am really loving this announcement.

For one Freddie Prinze Jr. is my hero. So all for seeing him on DC Universe especially.

But Tabletop RPG shows when done well can be a truly unique and engaging form of entertainment. And DC Universe has so far given us nothing but quality shows. So I think they will do them right.

Only concern I do have, is most RPG shows are around 3 hours or more. Because Tabletop RPG’s are so slow and methodical it takes about that long to really go anywhere. (not that any of that is a bad thing). But have a feeling, although I would love to be wrong, that this will probably edit it down to an hour, or be a 5 hour session given us in 1 hour increments. Again, just my guess as when new people discover RPG shows in places like Twitch who are not familiar with the games or the format, the one common complaint is they are too long. And sure this will want to appeal to casual fans.

But if edited right that can work to their advantage I guess.

Either way I am on board. Was starting to think we were going to get an over month long hiatus in new programming. Which both would be dissapointing as a DCU fan, and likely lead to more people assuming that nothing being on meant the worst. So glad they got something to fill the gap, I think if fans give it a chance they might be surprised how much they will enjoy it.

I have physical copies of First and Second Edition of DC Heroes, plus the Batman stand alone game. I do have a PDF of Third Edition. I also have Blood Of Heroes in physical and PDF format.
I understand that DC now the rights to the old MEGS system the game uses. I hope the show makes it so popular DC thinks of publishing a new edition, or at least a re-release of the previous editions.
They are publishing the Watchmen material, and it would be neat if they can do more.
I also have a bunch of DC Universe and all of the DC Adventure books.
I’m a huge fan of all sorts of RPG’s.

I LOVE this RPG. We played it as much as D&D back in the 80’s. Can’t wait. I wonder if this will lead to a reprint of the game??? They just reprinted the Watchmen DC heroes supplements…

Welcome to the community @Hoboking89.58761. This sounds like a fun show.

An interesting way of using “unscripted” type content. I’m not much of a fan of “reality tv”, but I’ll check out the first episode or two. For sure. It’s a good way of getting “filler” material at low cost.

As a huge fan of Dimension 20, Not Another D&D Podcast, and all things DC I can honestly say that this is a dream come true. So happy to be experiencing the renaissance of tabletop gaming. Further proof that DC Universe is the best entertainment app available.

Either way I am on board.

I see what you did there.

I feel like the RPG should be available in the shop.
You could even call it “The DC Universe All-Star Home Game” if you wanted to.

Anyhow, the clip was fun, so I’ll stick with the show. Maybe it will get me interested in tabletop gaming.