And The New Batwoman Is .

Javicia Leslie, of God Friended Me.

‘Batwoman’: Javicia Leslie Cast As the New Lead Of the CW Superhero Series

God Friended Me co-star Javicia Leslie has been cast as the new Batwoman, succeeding Ruby Rose who

I’m still warming up to the idea of Batwoman w/out Kate Kane, but I’m definitely really glad for Javicia Leslie. This is a huge opportunity for her and hopefully this move can add more meaningful diversity to the show 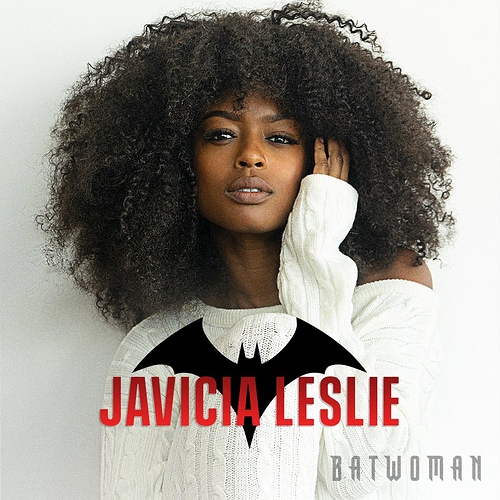 Big opportunity for her to build a new character. It’s a plus that she knows the rigors of filming a weekly hour drama, because it’s not easy for the lead. I’m interested in how they’ll build her character and integrate into the existing show.

Honestly haven’t seen her work before, but from the Google search I just did she seems super cool! Happy to see her get this role and can’t wait to see how she handles the character. I also hope Ruby is also able to find peace and relaxation now that the burden has fully been taken off her shoulders. All around good news.

She was great in God Friended Me and I am excited to see her as Batwoman next season. Her casting gives me hope.

Wonder if she’ll keep her hair same style as the pic for Batwoman because that would make for great visuals.

Just saw it. Cool can’t wait to ww what they can pull off especially with it being a new character there kind of limitless possibilities.

I’m not familiar with her work, but looking at Javicia Leslie’s IMDB profile she has had multiple regular or recurring roles on TV shows! She should certainly be accustomed to shooting a weekly series.

Curious to see what changes they’ll do for the costume

I am hoping they can lure Ruby Rose back at some point if they dangle the White Batwoman/Black Batwoman storyline in front of her and have it set in Arkham or even a regular women’s prison in Gotham City.

I don’t think Ruby’s interested in returning to the character. It sounds like the pressures from fans, the demanding schedule of filming, and injury she took on set were all very taxing on her mental health. Obviously if she feels up to it, she’d be welcome back to the series with open arms, but it sounds very unlikely. I think we should all be mindful of what she went through and try our best not to amplify or pressure her into anything. I wish her nothing, but the best (as I’m sure you and everyone else does

It is the way my mind works. When i don’t have anything constructive to bring to the conversation knowing nothing of the actress they have cast for Season Two, i always go for the jokes.
In this case, a reference to 70’s Blaxploitation films starring Pam Grier i.e. Black Mama/White Mama.
I can easily delete the above comment and just sit in the back quietly.
I loved Ruby Rose as Kathy Kane/Batwoman and wish nothing but the best for her down the road as I do the woman playing the new Batwoman.

Oh, sorry. The joke went over my head. I dont keep up with the comics so I assumed there was an actual black Batwoman meets white Batwoman story. My apologies haha. Feel free to r/woosh me.

No worries. 90% of my film/television/comic book references I have to tell people “You’ll get it in an hour or so and if you don’t, it doesn’t really matter.”
I don’t keep up with the comics either not for lack of interest but out of financial and storage issues plus i am always busy working on stories of my own.
i now return this thread to its original topic.

I’m really excited! I had a few reservations about switching to a new character, just because Kate is so tied to everything that was going on when S1 was cut short (Alice, Hush taking Bruce Wayne’s face, all of the Crows plotlines) but ultimately having a new character presents so many opportunities I think it’s the right call. Plus it will be kind of hilarious having Mary and Luke be the ‘veterans’ in the Batcave given how new they both still are to superhero stuff.

So she’s going to be a different Batwoman?

Yes, the producers confirmed they’re introducing a new character. Kate’s disappearance will be the mystery driving the second season.