Very happy to finally dive into the adventures of Amethyst on DC Universe! Haven’t been able to read this before but it’s always looked cool and I’ve heard only great things about it. Well, now it’s finally here.

Now, we only have issue #16 of the following 16-issue series (plus a one-shot Special), so hopefully that’s coming soon. There was another short 4-issue series right after that, plus the 9-issue Sword of Sorcery series during the New 52. Would be wonderful for all of that to eventually be here!

I know Amethyst is back now in Young Justice, but I’m not up on the current comics yet.

Thanks for posting this. I did not see the comics available and I have been wanting to re-read the first mini. I do wish that DC will one day give this character a proper collected editions. We got a showcase but they cut off the series and never offered vol 2.

If you haven’t read the more recent series of Amethyst, Sword of Sorcery, it is a true joy of a read. A lot of fun. Too bad it only lasted the one story arc. Happy reading

You’re welcome! And maybe DC will bring her back for her own new series again?

Thanks Mae, I’ll definitely check these other issues out!

For me, that 12-issue run with of Ernie Colon’s artwork is the definitive Amethyst and it’s been great in Young Justice to see DC returning to the roots of that artwork style.

I still shake my head sadly to remember what they did to Amethyst for New 52 and with the horrible Future’s End version of her.

By the way some of the spirit of this definitely comes through in the series Blue Devil that was done by many of the same writers and artists as the Amethyst series that’s also here on DCU!

I was however a bit surprised how rapey those first few issues got, especially keeping in mind he’s a 13-year old girl. But like you said, Don-El, the art is awesome. Loving those '80s vibes!

She, not he. We need that Edit button!

Amethyst is also in a crossover events which most people don’t speak about. Mainly cause she wasn’t represented as the hero we know and love. But when it comes down the pipelines potentially, I don’t know if it has all been digitized or not, the issues are:

The event is called Convergence. Not that other longer event either. Also she can be seen in the background of at least one issue of the Day of Vengeance series and an issue of 52. I am sure there are other appearances of her as well, but the ones Mae has mentioned and these I think are her “big appearances” in DC.

I totally agree on how Smethyst is dressed in that wonderful 12-issue series, that’s the one thing that it would have been nice if she was dressed more like a princess.

Can you imagine one of the royalty of Britain running around in that outfit to official functions? I guess to play tennis?

My kingdom for an edit function here

Thanks for sharing. I look forward to diving into this.

I’ve never read Amethyst, but with all the shout outs the book’s getting on these forums and the discord, I’ll have to check it out!

Amethyst is part of my comic book “secret origin.” Amethyst #1 (1984) was one of the first comic books that I ever picked-up (off a spinner rack, no less)… and it was my first, first (#1) issue ever. I especially love the covers of issues #10-#13 of the regular series. Amethyst is definitely an underutilized character and, as a Lord of Order, she should have a higher profile amongst DC’s magic characters. 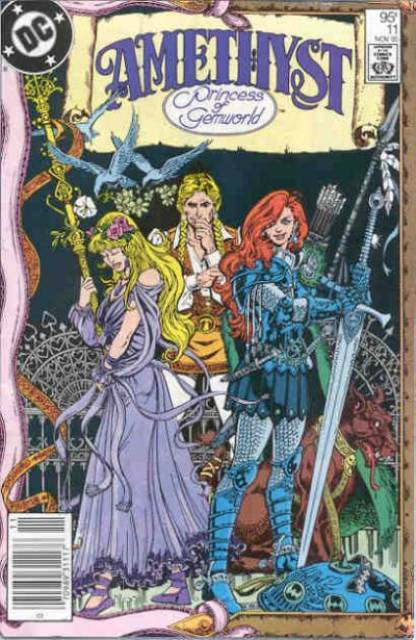 Let’s get an Amethyst series going on DCU!

Well they definitely have a plan for that actually, I believe under Wonder Comics.

I hadn’t heard much about the character, but after seeing all the enthusiasm on here, her series is definitely going to be the next thing I check out once I finish up the Fourth World titles.

Im excited for this too, I’ve been wanting a Fantasy themed series, Between Amethyst and other Sword and Sorcery titles like Arion of Atlantis , Camalot 3000, The Demon all have that 80’s aesthetic that I’ve been hoping would get added to the DC Library here.

With the success of the new She-Ra TV series on Netflix, maybe DC Universe could do an Amethyst show?

Thank you for this, other than her 12 issue run, I didn’t know about those other books she was in.

I can’t wait until they put on here where she fought the Specter head on. I was kind of a jerk and didn’t give her a chance until I here to fought a guy who took down Superman, Batman, wonder woman, & Zatanna together head on. then i started reading her stuff and seeing just how awesome she really is.

" For One does not Simply face the Specter"

The New 52 Amethyst (Sword of Sorcery) was one of my favorite titles of the whole New 52 run. A shame it got cancelled after 9 issues.

Her underrated New 52 series was my intro to Amethyst, Gemworld and so on. The DC Nation shorts also expanded my interest in her.

Young Justice is great. Amethyst is a highlight of the series so far.