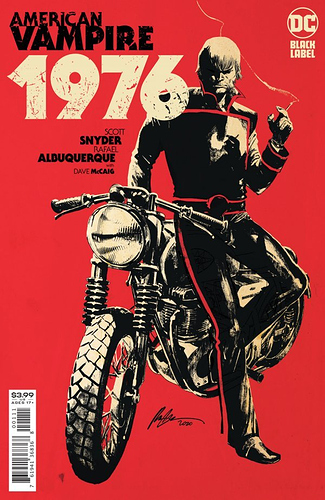 PART ONE, "DON’T LOOK BEHIND YOU!"

America is broken. Trust between the government and the American public has crumbled. Paranoia reigns supreme. It’s 1976, and this is the concluding chapter of the Eisner Award-winning American Vampire! Skinner Sweet has exhausted all efforts to regain his lost immortality. With his powers and purpose gone, he is now determined to go out with a bang. At a seedy motorcycle rally in the desert where he’s closer than ever to his death wish, Pearl Jones and a shocking partner tracks him down for one last, desperate mission: The force known as the Gray Trader and its minions are tunneling through the bowels of the world to unleash hell on Earth—just in time for America’s bicentennial. With catastrophe looming, it’s up to Skinner and Pearl to reconcile and change the course of history—or die trying. The series that launched the careers of superstars Scott Snyder and Rafael Albuquerque returns for nine final issues and the closing chapter of the legacy of American Vampire.

Feel free to express you excitement for these books or to talk about how much you’re enjoying reading them. but please don’t begin any spoiler conversations until Saturday, 10/10/2020.

I was very excited for this one. It’d been years since the last issue and I forgot what happened. During the pandemic, Comixology had a massive sale and I got all the trades for a steal. It was a great reminder why I loved American Vampire. After reading this issue…it’s like it never left.

Seeing Skinner adjust to his new lifestyle was interesting. He can’t approach things like multiple attackers like he used to. Also, here’s something I’d never thought I’d say: that disco scene was amazing!

With the surprise at the end, it’s gonna be agony waiting for the next issue.

Really enjoyed this issue – I had previously read all of this run before, but it had been a while, but Snyder was able to deftly reintroduce all these concepts and characters in a way that felt quite organic.