Amber Heard As Mera– Should WB Keep Her or Recast Mera or Cut the Character Altogether in Aquaman 2?

With all the drama coming out about Amber Heard and Johnny Depp’s and the abuse that went on during their short marriage and along with the petitions and calls for her to be fired… I got a question.

If the heads at WB decided to fire her who would you recast in her place? Or would you cut the character altogether? Or should WB ignore the calls for to be fired and keep Amber Heard as Mera? 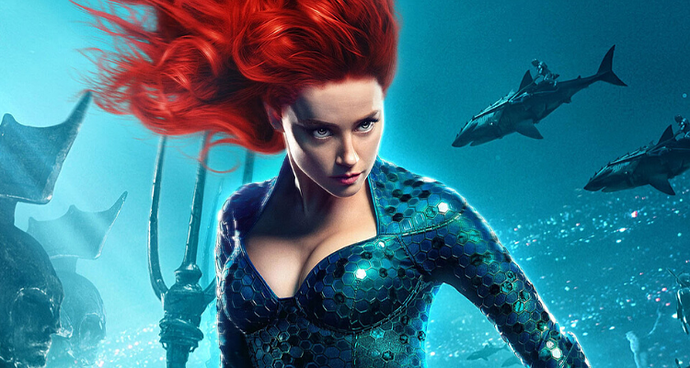 I don’t know whether to recast or keep her. What I do know is that Mera has to be in the next movie, no matter who ultimately plays her.

No. I like the job Amber Heard did. I think the personal lives of actors shouldn’t really get as much spotlight as they do. I personally don’t mind what’s happening in their lives right now.

That’s not to say I don’t disapprove of anything that may have happened. But they called for Johnny Depp to be fired and WB decided to keep him. Mera is part of what made Aquaman great, I would be disappointed if they just cut her out of the movie and chose someone else.

Keep her, despite the poor judgment in revealing her private affairs for all to see and criticize. I don’t condone anything that happened between them, but I don’t need to know about it.

They should absolutely recast or cut Mera. Amber Heard should very likely be in prison.

The argument that WB kept Johnny Depp when Amber Heard accused him of abuse so they should keep her isn’t valid. The accusations against Johnny Depp were just that, accusations. There are multiple forms of evidence that prove Amber Heard did abuse, and almost kill him. From her actively admitting to the abuse, photos, medical records, and witnesses. To keep her would be a slight to abuse victims and quite frankly just a disgusting move on WB’s part.

But it was still a popular movie and character. I didn’t know the issue was still going at this point… just looked it up. This matter really needed to be handled privately because it could destroy both of their carreers.
I still don’t think she should be fired. She should serve time if true. But I don’t know enough about it at this point to make a good judge.

She admitted on recording that was legally obtained through marriage counseling that she physically hit Johnny on top of lieing and saying that Johnny was the abuser, causing him to lose his role in Pirates. How has she not been charged? This type of person should not be a role model for anybody.
What about what happened to Melissa Benoist. If her abuser was given more roles on the CW series would that be right?

I can see your point. Abuse in any way is wrong and people should be punished for it.

All we know are leaked ‘facts’ and everyone is entitled to a complete hearing of all facts. Justice should run its course. If she was a professional male athlete, the discussion would be on how she’s entitled to numerous second chances. No matter how you slice it Depp probably has his share of guilt.

They could easily recast her. Have hair, makeup, and costume designers change up the look enough and most people won’t notice or care about the recasting. Heard gave a good performance, but I’m quite sure there are more than a few dozen actresses in Hollywood that have as decent if not better acting capabilities and they could probably get them cheaper than what Heard is scheduled to get.

If they’ve already started primary shooting, that’s a different matter. You just finish the shooting, then while it’s in post WB very publicly severe ties, and she’s not involved in any of the press tour for the film.

You’re always the voice of wisdom. I am ever so slightly jealous.

Hearing her try to justify her awful behavior in that audio does make me look at her in a pretty bad light, to the point where it would probably distract me if she kept going in the role.

Like, if she came out in front of it, admit to her misdeeds, face the consequences and vow to do better, maybe it could work, but like someone else said, it’s not like there aren’t several other actresses out there who can do the job just as well, if not better.

I haven’t watched Aquaman 1 but like others said they can easily find another actress to fill in for the role.

Usually the whole ‘separate artist from the art’ come to mind but considering how it’s a privilege for these celebs to land iconic roles and ‘as of now’ it seems her claims were a lie to the public + drama for WB I think she doesn’t deserve the opportunity to reprise such a role.

@Behemoth JK Rowling also defended Johnny Depp’s casting years ago (possibly had more knowledge than the public did about Depp and Heard’s situation) so she may have had a hand in him keeping that role idk just speculation.

She probably can be recast with someone possibly better in the role, but removing her prematurely is the same as Disney dropping Depp, again possibly prematurely.

They should keep her, her personal life has nothing to do with a movie.

I don’t feel like WB dropping her as Mera is the same as Disney dropping Depp as Jack Sparrow. There wasn’t really any evidence supporting the claims that he abused her. Just her word, and even multiple people stood on his side, saying they never saw any signs of abuse by him. Whereas, now, there is an audio recording of her admitting to it, photographs of some of the abuse, people coming forth saying they were witnesses to it, etc.

From what I’ve seen, it appears filming doesn’t even begin for Aquaman 2 until sometime next year. That’s plenty of time for WB to do an investigation and even find a suitable replacement for her.

Most major corporations have an accountability and “bringing the firm in to disrepute” clauses in contracts.

The larger and more public the company, the more likely those are contract stipulations.

WB may not want her associated to their brand.

With that said, living in a social media/24 hour news cycle world, it is also important to remember that people still have a right to due process. Was it abuse? Simple battery? Was it provoked?

While I’ll defend WB’s right to decide who they put in their movies/TV. I’ll also stand by the “one is innocent until proven guilty in a court of law”, as well.

People are often to quick to rush to judgement without knowing all the evidence. Heard isn’t guaranteed a role in Aquaman 2, but she shouldn’t be indicted unless there is legally compelling evidence. This may be on reason she hasn’t been charged yet.

It might be better to let her twist in the Hollywood wind, than bring a flimsy case against her that she’ll most likely win. An exoneration in court may not be in the best interest of the public. Especially with someone who pretty much makes their living by having large numbers of people wanting to see them.

A callous perspective, perhaps. But, then again, I can be a callous individual.

This may be pretty callous on my part. But I hope she is innocent and they are just acting like an unhappy divorced couple. Because I like Johnny and Amber grew up in Texas and I stick with my people.