Things like this are why one needs a publicist. So they can sue the bat-pants off of such hucksters~!

Get on it, Mindi!

Also, this is that Alex Ross/Paul Dini book. Have a great weekend everybody! 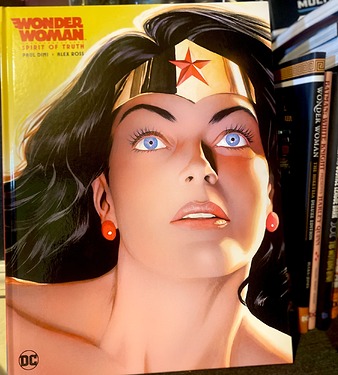 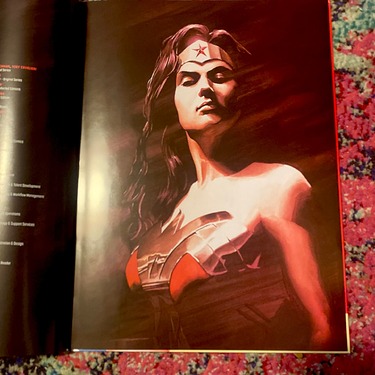 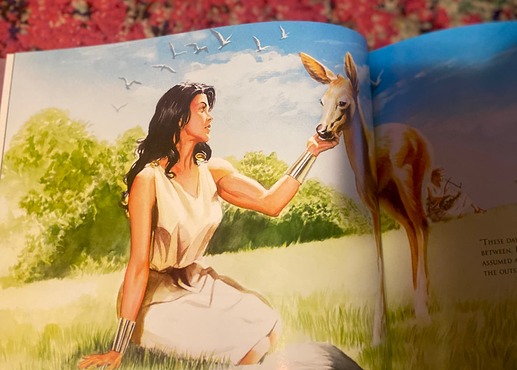 Now Themysciran Frozen Yogurt is absolutely something Diana would endorse.

Also, this is that Alex Ross/Paul Dini book.

I’ve read that but I didn’t remember the kanga art.

Now Themysciran Frozen Yogurt is absolutely something Diana would endorse. 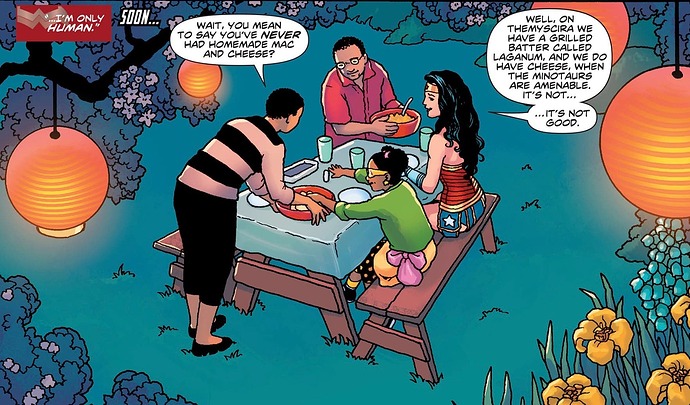 Backstory: The ruler of ‘Zani Island’ an island nation rich in resources both in terms of a vast wealth in gemstones, and its rich fauna. Prince Sleeko was a ruler who wished only the best for his people.

The island attracting the United States who desire to have one of their military instalations on the island, Prince Sleeko sees this as an opportunity and travels to America to petition the greatest university in the country the Holliday College, for a satilite school to be built in his country in an effort to advance his peoples knowledge and learning.

Prince Sleeko would fall in love with Etta Candy, becoming one of her many romantic interests and at the deans recommendation, Etta would personally travel to Zani land to construct and prepare the new school due to her incredible knowledge in seemingly every form of academic knowledge.

While Prince Sleeko would use any opportunity to lavish praise and gifts upon Etta, his heart in truth belongs to his people and country above all else. 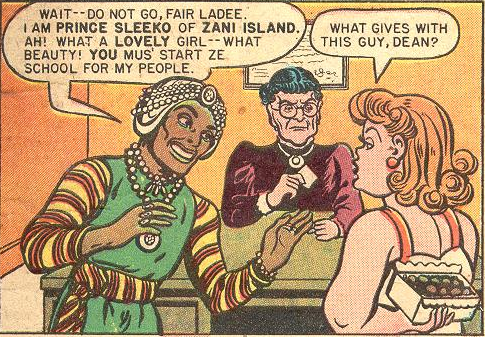 Backstory: Daughter of King Ritio. Selina was the princess of Pogolana, the birthplace of the pogo stick and a land wherin every aspect of life is in some way, shape, or form, influenced by the pogo stick.

A proficient athlete in the pogo stick, Selina was sent to America to avoid becoming involved in a deadly coup, while also receiving the finest education in the world at the hands of the Holliday college.

Bringing her beloved sport of Pogo polo along with her, Selina would soon transform the world of sports by making it a beloved pass time of college students across America.

However Selina while desiring to further her education at Holliday college so that she would be a wise and just ruler when she eventually took the throne, would always worry for her father and her country with her scheming aunt vying for the throne.

Alright, with that, im going to go on a hiatus for a bit. I apologize for the long silence, but I will be without a computer for some time. I shall return in about nine days to continue articles~

Enjoy your break. I do read these in my email notifications and enjoy them. I’m just not good at commenting.

We know why you’ll destroy a sundae now.

@WonderSquadron Good afternoon! We have some new activities for you!

First, a Watch-Along and trivia w/ our friends at DC History Club and JL Book Club celebrating the 5th Anniversary of the 2017 movie. Hope to see you there!

Hey there, everybody! Summer is just around the corner, it’s Pride month, and this movie is officially 5 whole years old—so! We have another the perfect movie we’d liked to watch together and, as always, everyone is invited!

Wonder Woman (2017): Trained to be an unconquerable warrior on an island paradise, Diana, princess of the Amazons, leaves her home convinced she can stop the threat of ’a war to end all wars’. Will she discover he…

Next, new reading for the month!

Spotlights on Diana and Nubia, including some brand new additions to our DCUI Library. Stop by and discuss all month.

I should have mentioned Grace Choi for AAPI Month, but she also is a great character to check out for Pride Month. Grace is half-Bana-Mighdall, half-Korean-American, and all bi/pansexual awesomeness. She is a member of the Outsiders, and you can learn more about her in The Other History of the DC Universe #5. 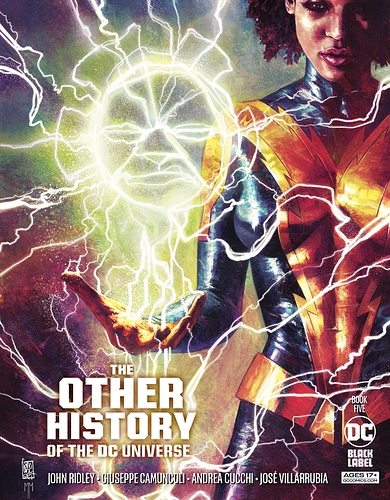 The Other History of the DC Universe #5

Being a superhero runs in Anissa Pierce’s family. It’s been a part of her life in one way or another since her father, Jefferson Pierce, first started to...

Grace also appeared in DC’s Festival of Heroes, and she showed up in today’s Vixen Webtoon episode. 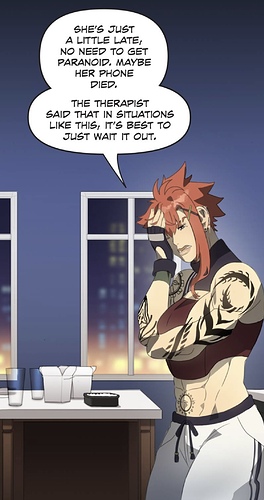 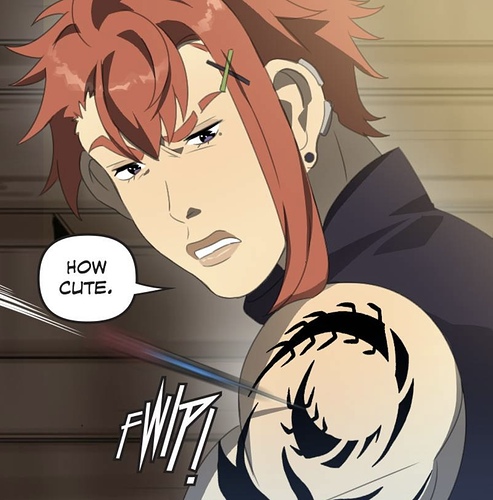 Gonna drop this here (thanks @Mae for sharing this story!): 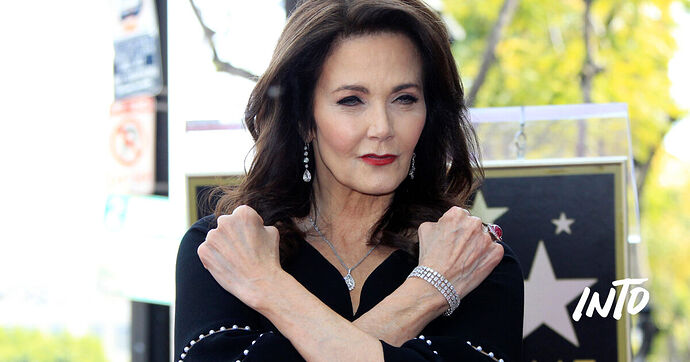 Wonder Woman has entered the Pride chat. The O.G. on-screen Wonder Woman, Lynda Carter, had to remind everyone that the Princess of Themyscira is an LGBTQ icon. ... 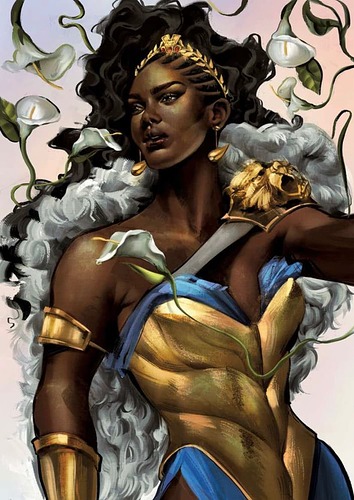 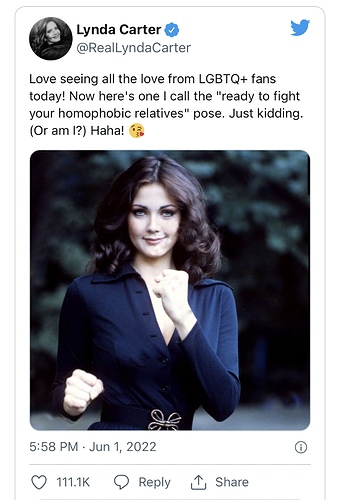 The Other History of the DC Universe

This is one of my favorite series I’ve ever read. Ever.

Backstory: Born an overly serious and stern individual. Gay Frollick had been someone devoted to her work and studies. Refusing to put aside any time for her own enjoyment and personal well being for the sake of work ethic.

She was so in love with her work that when her employer proposed to her, Gay agreed, seeing it was a way for her to become more devoted to her work. Unaware that she was getting engaged to a mob boss who intended for her to take the fall for his crimes and divert attention away from him.

Her family dying while she was imprisoned for crimes which were pinned on her by her fiance who cut off all association with her when she was released from prison, Gay found she could not find work and thus attempted suicide because there was no reason to live.

However rescued by Wonder Woman, Gay Frollick would be introduced to the joy of having fun and living, leading to Gay learning to enjoy life and happyness so much that it led to her devoting her life to sharing that joy and delight with the world.

She would go on to found the ‘Joy Foundation’ a non profit organization which would strive to relieve people of the stress of daily life and bring delight to their hearts.

She would found ‘Joy Clinics’ across the country. Buildings were people could go to relieve their pent up frustrations free of charge where they could introduce joy into their lives. All so that others could frollick gayly like Gay herself. 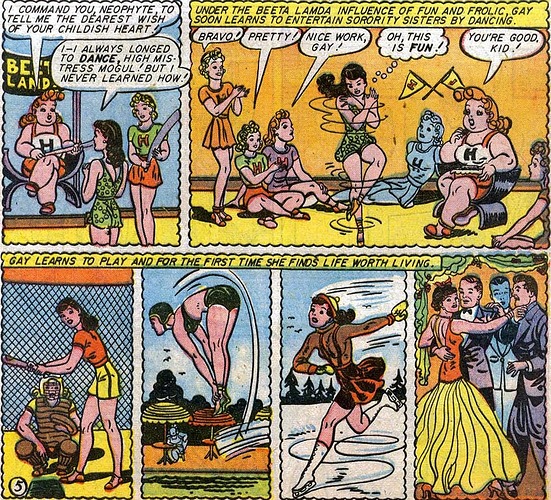