Fun fact: This is the first story to feature the multiverse in all of the DC universe with Diana being the first to travel between different Earths.

Backstory: Amazon of Paradise Island. Orana was an Amazon who desired nothing less than to become Wonder Woman. Caring more about the honor and prestige such a title would give her over any thought for the well being of others, Orana was a cold and callous individual who would do anything to earn that title.

through treachery, murder, and putting the Earth itself at risk Orana would gain the title of Wonder Woman and swear to bring peace to the world! By finding the central figure responsible for the lack of peace and punch them in the face hard enough that peace reigns across the world.

With no interest in learning about how the outside world functions or a desire to blend in to their society or learn their rules and ways of life, Orana defined herself as an outsider to their ways and looked on with contempt as she sought out the cause of their woe.

In the Rebirth era, Orana would be reimagined as the keeper of the Amazonian armory. One who collects the legendary weapons and relics either created by or obtained by Amazons over the millenia and studying them. Seeking to uncover their secrets and histories.

This more modern interpretation of Orana lacked the pathological drive of her pre crisis interpretation, having a firm grasp of Amazonian virtues such as compassion. 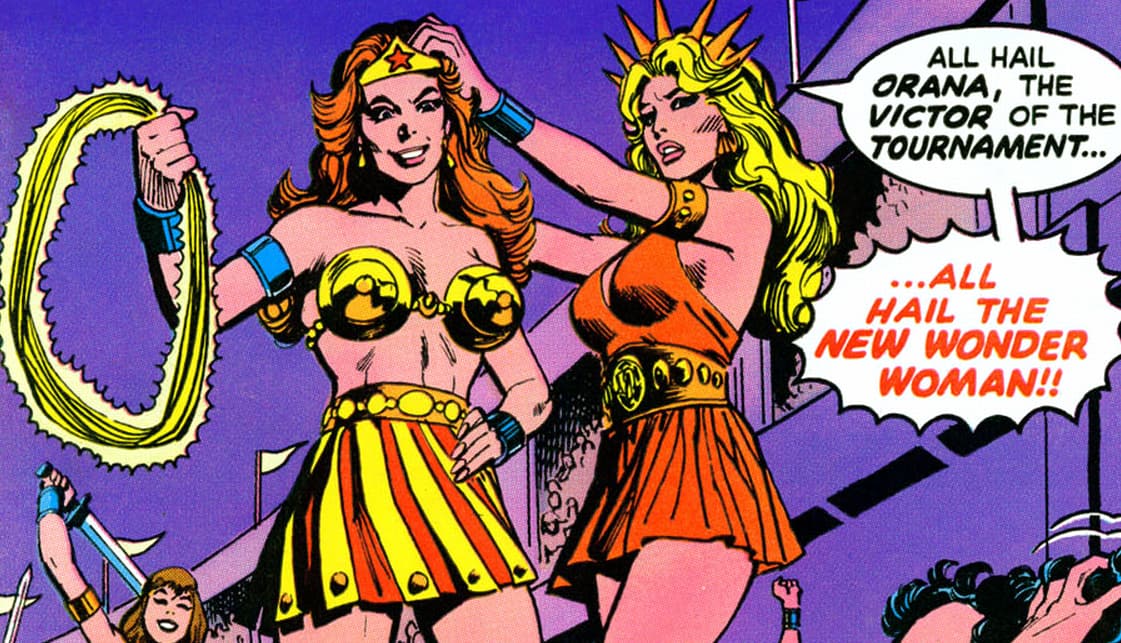 They should have a Wonder Woman Comic where Circe finds the Amulet of first Youth and than uses it to try to take over Themyscira by turning all the Amazons, and also Hippolyta all back into babies again and then she goes to Mount Olympus and manages to even turn God’s like Athena, Aphrodite, Hermes, Apollo, Artumis, and also even Zeus back into babies again and tries to rule over them but Wonder Woman says enough of this madness Circe turn all the gods and my Mother, and also the Amazons back to their normal ages again Circe and she says no thanks I think you should be joining them instead Wonder Woman block her magical amulets abilities with her bracelet and it bounces off them hitting Circe in her chest turning her back into a baby again herself Wonder Woman than take bsby Circe’s Amulet of Eternal Youth and crushed it into many tiny pieces causing the Gods, Amazon, and also her mother to turn back to thier regular ages again including Circe who said this is over Diana and she says that is true but on this day it is for us though!

Sounds like a neat idea for a fic. Tragically not one id be able to pull off as id find it irresistible to make use of Astra and Wonder Tot.

Backstory: Field representative for the National Aeronautics and Space Administration. Conrad was the one responsible for coordinating NASAs operations in Houston Texas.

Stacy Macklin, Mike Baily, and…Diana Prince. For after Steve Trevors fifth death, a heart broken Diana sought a change in her life. Thus she would apply to join the NASA space program, becoming one of their daring astronauts in an effort to help humankind take to the stars.

With Conrad in charge of things he would push the three new astronauts into their training and coordinate all space flight operations from their based in Texas. Creating a challenge for Wonder Woman to juggle the strict scheduling of a NASA astronaut with her efforts as a superhero.

Greetings @WonderSquadron Hope your week is off to a great start! Just a quick announcement to let you all know we have a few new club threads around the community- stop by anytime.

Diana vs. the machines General Discussion

but we’d be lying if we said we didn’t also love her brute strength—Look at her go! [image] If you come across a comic panel, gif, or artwork of Wonder Woman (or any Amazon) being mighty?

DROP IT HERE for all to enjoy!

Backstory: A college student born of a wealthy well to do family who lived with her parents until the stifling environment led to her running away from home in an effort to obtain freedom. Cathy Perkins would run afoul of the malevolent gang known as ‘THEM!’ and become their collared slave. Forced to serve their wants and needs until opportunity gave her the chance to escape at last.

Found by Diana Prince, Cathy would be taken in and given a place to live and later, would get Dianas help to reconnect with her family and reconcile after being apart for so long.

Cathy would go on to live with Diana, becoming her assistant as the clothing store which Diana owned in Greenwich village. Operating it and keeping it going while Diana was trecking across the globe combating villainy.

Thus thanks to Cathys aid, Dianas always had a home to return to. 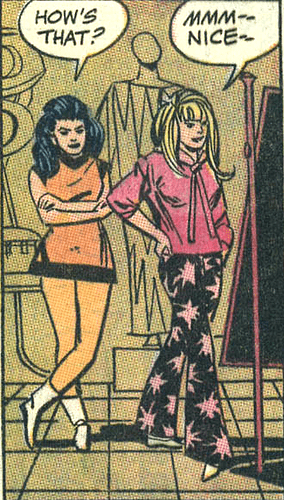 Hello again! Our neighbors at

Book Club are reading Earth One this month if anyone wants to stop by. 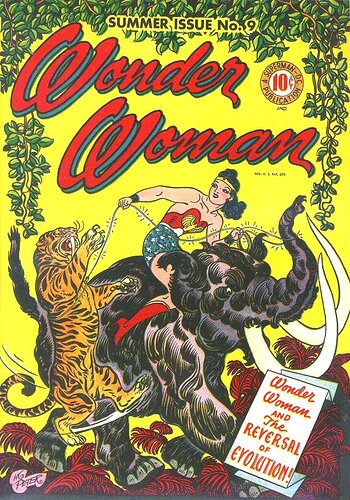 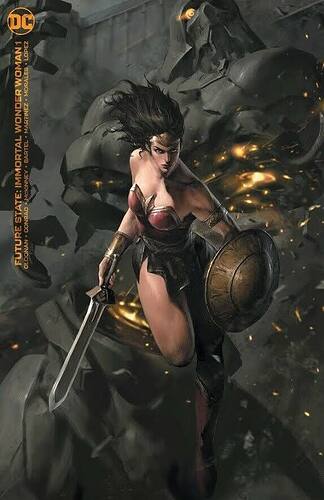 I confess I felt really dumb trying to understand the science and logic in this issue and failing pretty hard.

Backstory: Formerly a young girl who charmed by the Gross spy X-46 into aiding the nazis spy network. Eve would be caught by the Holliday girls who convincing her to give up her evil ways, would go on to enroll in the Holliday college and become a member of the Beeta Lamda sorority.

Aiding Steve in his investigations into other spies in the country and joining Etta and the other Holliday girls in daring adventures, Eve went on to turn over a new leaf. Resisting efforts to turn her back to villainy and striving to do the right thing. 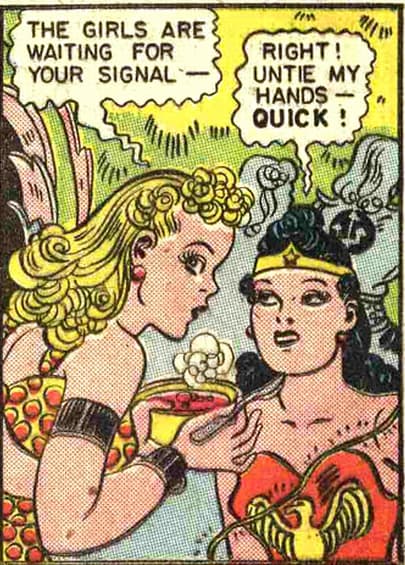 Backstory: Amazon born of a human form. Galenthias was a devout priestess of Hestia who held the goddess of magic and witchcraft in high regard. Swearing her fealty to Hestia, Hippolyta, and Diana. Galenthias was a noble Amazon and servant of her patron goddess.

Wishing for great magical power so she may better aid those she cared about, Galenthias asked and received incredible magical power and became a cat in the process.

Her efforts gaining great recognition from the goddess Hecate, Galenthias would receive ear scritches for her noble deeds.

In the Odeseyverse timeline, Galenthias (along with Philipus) would be Dianas caretakers. Raising her and keeping her safe in a world ruled by vengeance. 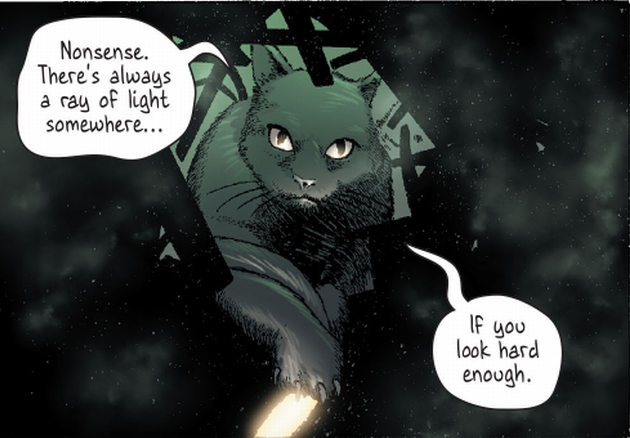 Backstory: Over a century old. Mother Juju was a mysterious expert on magic based out of Washington DC. Known to the upper echelons of the intelligence bureau who would seek her out for answers to problems of an extra normal nature, Mother Juju would help those in need.

Diana running into supernatural problems of her own would eventually cross paths with Mother Juju who already knew of Dianas identity as Wonder Woman before she even arrived. 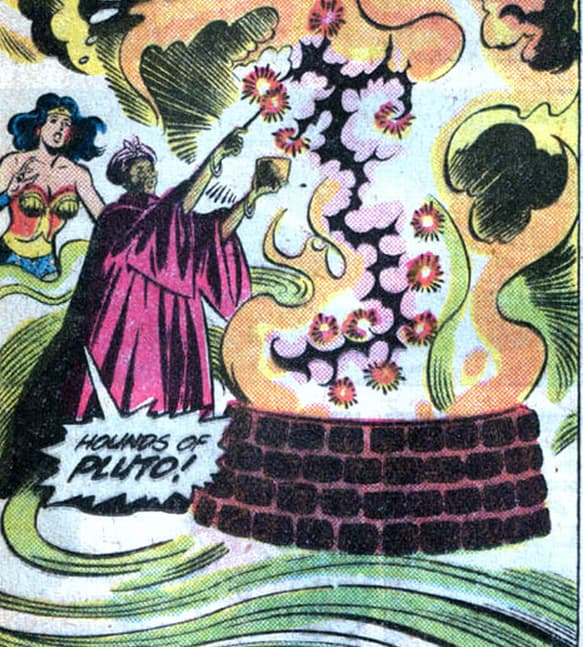 Backstory: Holliday college professor and teacher of anthropology. Professor Homos was a renouned mind in his field who would seek out new and fascinating life. His focus being on the study of the men in different cultures.

Relied upon as a consultant by the United States government, Professor Homos would often travel to conduct studies in far off places, eager for the chance to make daring new discoveries and great scientific finds. 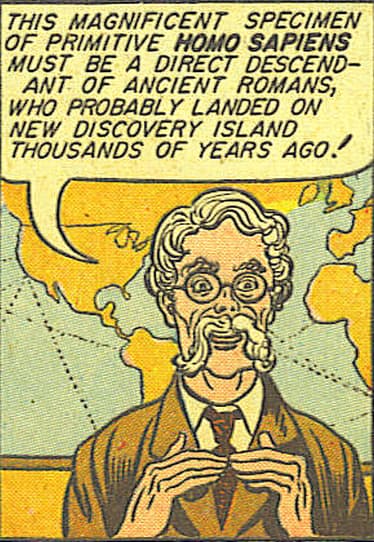 Backstory: Ancient genie who has existed for several thousand years. Genro possessed incredible magical powers so long as he wore his turban, but would lose those abilities should his turban ever be removed.

The perpetually giant Genro Genie would be locked away in a treasure chest three thousand years prior by an unknown evil genie. Cursed to suffer in solitude for millenia in the ocean until being discovered and freed by Wonder Tot.

The genie both afraid of leaving the island which was in the same region as Paradise Island for fear of being found by his enemy who would imprison him once more while also suffering from a severe fear of being alone, would remain where he was freed.

Owing his freedom to the young Amazonette, Genro Genie would take the tot on many adventure on Wonder Tots request. Journeying into outer space and seeking out monsters within the surrounding seas. 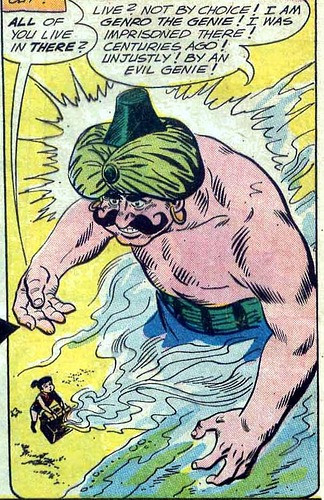 Name: Ronno the Merboy
First Appearance: Wonder Woman #107 (1959)
Creators: Robert Kanigher and Ross Andru
Abilities: Can breath underwater. Can swim at incredible speeds. Capable of leaping into the air like a flying fish. Surfing. Possession of a magic flute which attracts sea monsters.

Backstory: Born in ‘merman world’ a secret realm accessible only through a passage hidden within a giant clam. Ronno the Merboy would often roam the oceans surrounding that secret entrance. A region which included Paradise Island.

Befriending Wonder Girl and falling madly in love with her, Ronno would devote a sizable amount of his free time day dreaming about her, obsessing over her, and trying to win her affections.

Be it taking her dancing or attempting to shower her with music and presents. Ronno would seek to monopolize as much of Wonder Girls time as he possibly could manage.

Constantly putting himself into danger in his efforts to get her attention. Ronno bordered on nuisance, but his obsessive courting of her would not be stopped.

Just wanted to add to this, originally the merboy, merman, and mertots like the different Wonders (woman, girl, and tot) were all one person until Kanigher later retconned otherwise because Teen Titans

Very true~ The era was pretty wild, though lacking painfully in continuity and consistency, it made for some fair variety.

Favorite panels of mine from that era include… 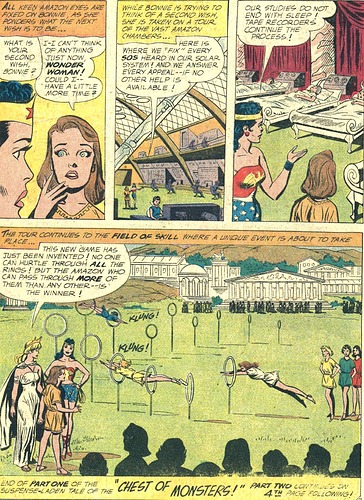 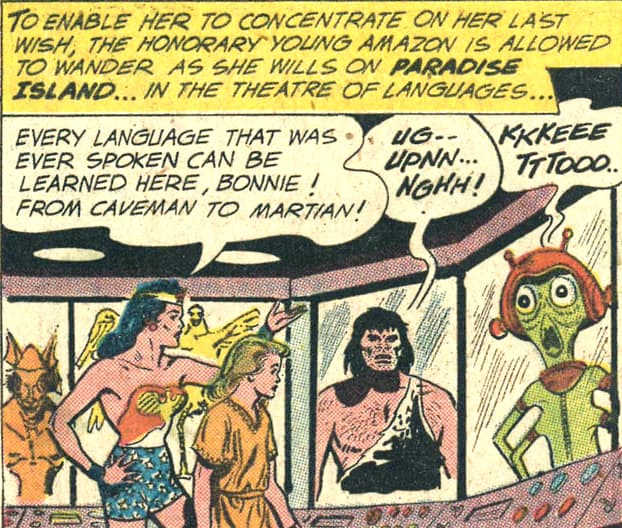 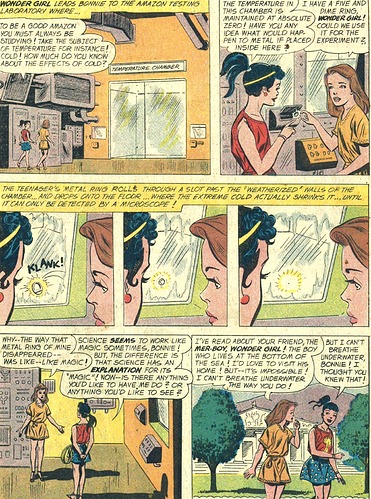 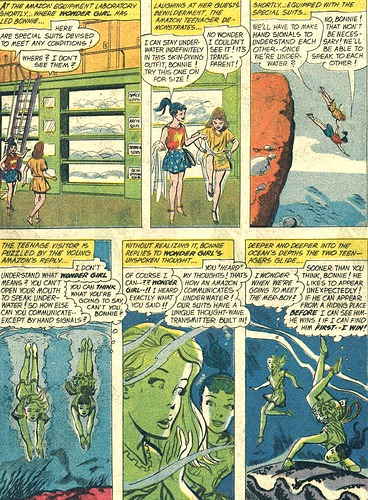 Backstory: One of the most brilliant scientific minds in the world. Professor Chemico was considered the greatest chemist in the world. With numerous other scientific fields being well within his wheel house.

A benign scientist with ambitions to better the world through his scientific invention. Professor Chemico was continuously inventing things like a long long lasting energy source, weather machines, and other such wonders.

However while Professor Chemico strives to better the world through through his scientific endeavors, he would not always look at the whole picture when barreling ahead, often bringing about unintended consequences with his efforts.

Were that not enough, Professor Chemico while knowing dozens of ways to better the world, knew hundreds of ways of ending it. With numerous methods of bringing about the end of the world such as a formula which would cause all of the worlds oxygen to ignite in an instant.

The good doctor striving to better the world would strive to maintain self control to keep himself from falling into the perilous mindset that is mad science.