Am I too much of a Superman Stan or Fan?

I have always loved the Man of Steel ever since when I was really little boy it was Superfriends as much as my Mom let me. I recently told my wife I want a white Labrador to call my own and name it Krypto. Superman dog tag and all. Just a little more about me my user name is Jsmsiggy ( J for my name Jacob S&M for SuperMan Siggy for my last name) . Since you know about my obsession let me know yours. Which hero do you just geek all the way out for.

If you search for my posts around this forum, you will start seeing a pattern

. I have a good size action figure and statue collection to show for it too!

No such thing as being too much of a fan of superman.

Having a Krypto dog is now my life’s ambition

@msgtv your welcome and it’s mine too just need more land to have a krypto dog run around at super speed. I used to watch the Krypto Cartoon with my son when he was little that’s how invested I was. Lol this makes me think of a new question. A new question will be coming up right after a word from the sponsor I’m paying. Do you like DC Comics get the DCU APP it’s better than drugs and almost as addicting. NotresponabileforfailedmarriageslossofworkorhomegoingintoForeclosure

I’m a fan of the females. Obviously Zatanna. I love Huntress & WW is the reason I’ve been a DC fan since Super Friends. I owe my DC love to WW but I probably geek out the most over Zatanna. Every time she appears in a comic or show/toon I get really enthusiastic. Only have Smallville so far for live action but it was a great moment. Hoping they’ll be plenty more soon. Also, my list is endless for females I’ll geek out over. The males, the mains I’m so used to I love em but it’s kinda old hat by now. The ones that excite me when appearances are made are the lesser used ones. A lot of JSA & Kirby creations.

I don’t know much about zatanna but she is a character I love seeing as well. I liked her in the young justice show especially.

Mini question I don’t think it’s 100 percent Superman without the yellow S on the cape. Give me your thoughts.

He’s still Superman without it though. The man makes the S, not the other way around

The “S” apparently stands for “Stan.”

By the way, show of hands: how many of y’all know where that term came from? I know; I just wanna know if anyone else does.

Have no clue what this Stan business is. Please do explain

@jsmsiggy My favorite character is the Warlord, hence my name. I love how he is a human character reacting to an unbelievable world of dinosaurs, super science, sorcery, and barbarians. How he was enslaved and lead a rebellion for freedom for all. And how he appreciates his life because he has been in the line of fire. 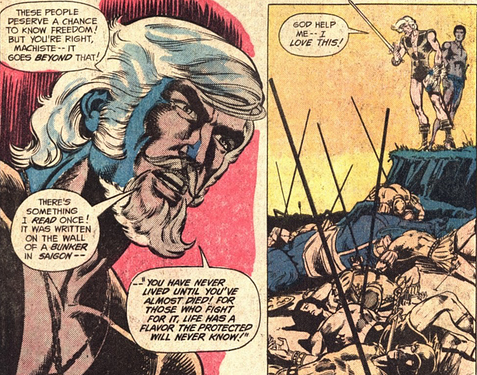 I believe in equal geekiness. So everyone gets equal amounts of my geekiness.

@SuperBatDanLantern best rapper around named after a candy I think M&M something like that .

@TravisMorgan I might not be 100 percent correct but I do believe they show him some love in the new Young Justice books !

“Stan” was originally the name of a song by Eminem from his second album; the song told the story of Stan, an obsessed Eminem fanatic (the character was based on the loonier members of Eminem’s real-life fan base) who became a homicidal maniac because his favorite rapper wouldn’t respond to his fan letters. As a result of the song’s popularity (it’s often hailed as one of Eminem’s greatest songs), the name “Stan” has become memetically associated with crazy and obsessed fans, often used in a deliberately self-deprecating manner. Hope that sums it up.

@SuperBatDanLantern I remember that song, but would not have thought to ever make the connection. Thanks!

@SuperBatDanLantern I’m not crazy for loving a fictional Alien from a fictional planet and I never not wished that the yellow son would give me powers. The only the thing the sun could give me is possibly cancer ; and radiation doesn’t give powers either. So thanks for killing my crazy dreams of Being Superman. Not really jk please laugh at the dark twisted sense of humor I have . Lol and any other laughing Acronyms

If I couldn’t laugh at dark humor, I wouldn’t be an Eminem fan.
“I just drank a fifth of vodka! You dare me to drive?”