Am I the Only One Who Thinks Val Kilmer Is an Awesome Batman/ Bruce Wayne? 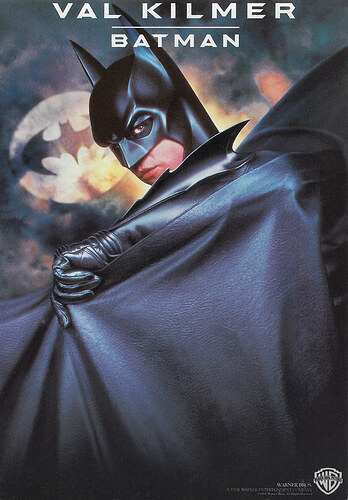 image713×1023 242 KB
So I’ve been thinking about this for several days now, I really don’t see enough people talk about Val Kilmer unless its just me but I genuinely think Val Kilmer is an awesome Batman/ Bruce Wayne I think he nailed the role and should be talked about more. Anyways I’m curious to know what you all think? Is he lame, is he the worst? Let me know guys!
7 Likes
KingsharkDp4vr April 5, 2022, 8:06pm #2

is he the worst

Thanks for responding bro! Dang, what didn’t you like about him? 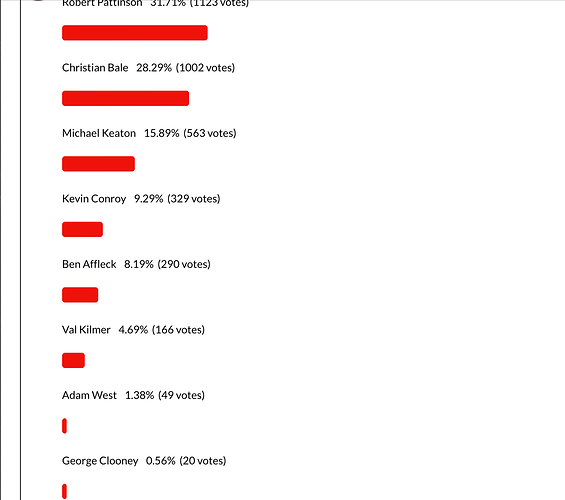 I can honestly agree with this post even though I like his version and think he’s an awesome Batman he is by far not the best.

He did the best with what he had to work with.

I think he’s decent as Batman, but he’s kinda dull as Bruce Wayne. Granted, some of his more interesting work in that film was cut from the final release…

I’m hoping we can see the Schumacher cut see the true vision.

“Am I the only one who thinks Val Kilmer is an awesome Batman/Bruce Wayne?”

Kilmer picks up where Michael Keaton left off admirably, giving us a believable evolution of the character without losing the Gothic pathos and tortured psychology of the character as envisioned by Tim Burton, and his performance is one of the things that makes Batman Forever a worthy successor to both Batman '89 and Batman Returns.

It’s such a shame that Joel Shumacher sold out and completely **** on the character - and everything he did in Batman Forever - by letting George Clooney and Chris O’Donnell treat the followup film, Batman & Robin, as nothing more than a homophobic farce.

No, you’re not the only one, when I first saw Batman Forever, I just love that movie, and it was the first movie I would see more then 2 times at the movie theater, I saw it 4 times on a big screen.
Fast forward 2 years later, I was so upset that they replace Val Kilmer as Batman, it was a stupid move in my opinion and it still is.
I was just watching Batman Forever recently, not only I enjoy Val Kilmer as Batman & Bruce Wayne, I also appreciated how the Riddler was a lighter tone villain. As much as I enjoy The Batman, Jim Carrey will always be my favorite actor to play the Riddler.
I wish Val Kilmer got to play Batman again, but it is what it is.
Also like how he played Doc Holiday in Tombstone.

He did a fantastic job.

No, you’re not the only one who thinks that, as I’ve loved Kilmer’s Batman/Bruce more than Keaton’s since June 15, 1995 when I saw a sneak preview screening of Batman Forever.

Keaton is great, no question, but when it comes to the Burton/Schumacher quadrilogy, Kilmer’s my dude.

I couldn’t agree more with you, I love Keaton but Kilmer is just something else. Sadly the next iteration with Clooney was terrible but Kilmer’s performance as both Bruce and Batman was very refreshing.

I wouldn’t say he’s my favorite, but I certainly don’t hate his performance. I think it was Knox or Toyman that said it best that he did the best with the script he had, and that some of the more interesting stuff was cut from the original.

Same! I watched it over and over and still to this day I’ll watch from time to time, I just love the riddler, the way he was portrayed was fun and I don’t know about you but I liked robin.

Val Kilmer certainly has the best Bat-suit, no question.

“What about the nipples?”

After 27 years, could we please shut up about the nipples?

Like Schumacher said in the Batman Forever Special Edition DVD commentary, “People made too big of a deal out of the nipples.”

Kind of funny how nobody notes that Batman’s sonar suit didn’t have nipples. Funny, indeed…

In Batman Forever, the nipples were fairly obscured by the lighting and/or scene composition. Thus, they’re truly not a big deal in that movie.

Now, Batman & Robin OTOH…yeah, go on and b**** about nipples all you want. They stuck out way too much there.

But but what about the nipples…

YES the batsuit was the cherry on top

The “panther suit” will forever be the best Bat-suit of that series.

See, I said “forever” and we’re talking about Batman Forever, so…

taps fingers together in a comically awkward fashion

I’ll just let myself into the Batcave, then.

Now, this is Tetris!

I never seen them on Superman’s suit or Spider-man. It never bothered me when The Incredible Hulk has them.
The thing I don’t like most from the director is a close up shot of butt, that didn’t needed to be there, fine show Batman putting on his glove & boot and mask, I mean come on Joel, your viewers aren’t that stupid, we know he’s suiting up.
I still think the nipple on toy and movie was a bit too much.
I still enjoy Batman Forever but still don’t like the 1997 movie.

Well, 14 year-old me didn’t exactly complain about a certain close-up of Batgirl in 1997 when he saw Batman & Robin three times during its theatrical run.

What? I was 14! Why the hell would I complain about…that shot?