All About Birds of Prey Comic Books

A couple of new series to add to the list!

I know we already have lots of reading clubs and things going but if anyone would like to read along with me, please do. I’m having lots of fun. I’m just doing the “before the Birds of Prey” stuff, and I’m up to Robin III: Cry of the Huntress. My favorite thus far has to be the 1989-90 Huntress series! It will take a long time but I fully intend to read pretty much everything BOP-related, including all Batgirl solo series. I just love these ladies so much

It was great seeing Amy Dahlen mention she’s looking to binge the original Birds of Prey, which is what I’m doing, though I’m still on my pre-BOP mission, starting the 1993 Black Canary series now. Also, here are a couple more issues for the overall list I posted earlier, it’s a quick two-issue appearance by The Huntress in Detective Comics in a lead-up to Robin III: Cry of the Huntress:

I was reading through the posts, but didn’t see it mentioned by Coco_Loco, but Huntress #1 (1989) was the first appearance of the Bertinelli version.

I really liked the gritty inking style they used in it, btw.

Yes, I included the earlier version of The Huntress just cause I like the character, but strictly speaking yes, that’s where the reading order really begins (or with the 1988 Batgirl Special). And I loved the artwork in that 1989 Huntress mini-series. Very gritty and dark, as was the story.

Here’s a little thing I wrote about Gail Simone’s run on Birds of Prey, about 15 years ago.
http://reprep.blogspot.com/2004/08/gail-simones-birds-of-prey.html

Thanks for that @LeonardoMyst, I’ll check that out, even if it’s that old! It’s cool that it’s still around.

Once sharing lists becomes possible, I’d like to have this as one epic reading list for everyone to enjoy. Of course you can’t add everything so I’m only focusing on Black Canary, Huntress, and Oracle/Batgirl, where they are in their own series or a lead or major character in another series. I’ve never had so much comic history available to me at my fingertips so it’s still a learning experience, but it’s been very rewarding so far.

Wow haven’t posted in this thread in a while, it’s been quite a few weeks, but I just finished the 1994 four-issue Huntress miniseries, which was interesting. But the art was unique. I’ve never seen anything quite like it, it was very bold and abstract. Weird but I grew to really enjoy it. Now only the first Birds of Prey official one-shot from 1995!

The Birds of Prey are back in a new series this October! Yay for the fishnets! 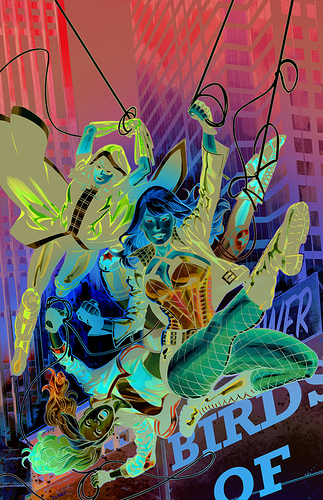 I wish they could have added Barbara and/or Cassandra to it, but I’m still pretty excited for it.

Off subject but I just read green Arrow/ Black Canary and it was so much better then I thought it would be. Also, the Gail Simone B.O.P. Are excellent. I’m sure people have helped u out by now. I did it by googling birds of Prey storylines on fandom gives u the crossovers and the issue order for the storylines. Need a pen and paper but so worth it!!!

Read nightwimg/huntress last night it was pretty good. Huntress year one I’m sure you’ve read but just in case. Who is Oracle, following are all B.O.P storylines; like minds, between dark and dawn, Blood & Circuits, Club Kids, Death of Oracle, Metropolis or bust, Sensei & Student, just some I had in my lil notebook that I read all good.

Hey djd, glad to see you here! I’ve been following the adventures of Huntress, Black Canary, and Oracle since the late '80s, basically Post-Crisis, and it’s been wonderful. Trying to do this in publication order, and I haven’t read most of their one-off appearances here and there but did try to get to the most obvious ones having them as lead or features characters. Right now on the Manhunt mini.

I just did the manhunt like 2wks ago, I can’t imagine u wouldn’t like it I thought it was great.

Speaking of isn’t it awesome? I’ve been keeping all my comic storylines in a notebook then rating em when I finish an arc, storylines crossover etc. B.O.P, WW, Batgirl, Batman, Superman and legion almost always get a great rating from me.

I found the plots in the oneshots and Manhunt to be very repetitive, honestly. Lots of “Black Canary or Oracle starts dating some guy… but he turns out to be evil!” The ongoing had more variety and developed Babs and Dinah’s friendship with each other more.

I sort of appreciate the thoroughness of going through each character’s whole history, but for someone who just wanted something good to read, I’d recommend skipping ahead to the ongoing. That said, while there were some weaker arcs, there’s not an actual bad issue of the entire series. The very dregs of it bottom out at “passably average with some highlights,” and most of it is really fun, so that’s a success. The second volume is pretty much just Part 2 of Gail Simone’s run, which is the best one anyway. I haven’t read the third volume or the “Batgirl and” title because I don’t like the reboot and I’m petty like that.

I’m hoping with the BOP movie coming soon, more folks dive into these stories if they haven’t explored them yet! These are some of my favorite DC characters and I can’t wait to see what the big screen version will look like, even if it’s not exactly the BOP we know.

DC’s definitely hoping people will because during the release of December’s solicits, they showed off some trade paperbacks of characters highlighted in the movie.

First, they’re doing “Batman Arkham” trades highlighting the villains Victor Zsasz and Black Mask, each collecting key/memorable issues featuring the characters. The Zsasz one even has a story that was previously unpublished, so that’s kinda cool.

But for the Birds themselves, there are four different trades coming out:

Birds of Prey: Black Canary – Collecting issues #1-12 (and the sneak peek during Convergence) of the series written by Branden Fletcher and drawn by Annie Wu.

Birds of Prey; The Huntress – Collecting the (awesome) Batman/Huntress: Cry for Blood mini-series by Greg Rucka and Rick Burchett.

Birds of Prey: Murder and Mystery – Collecting the first twelve issues of Gail Simone’s run of Birds of Prey.

And plus the new Birds of Prey book launching soon, right? But these original stories with the characters from the late 1980s and early 1990s were so fun and great, I had a blast and now I’m moving onto the actual BOP run proper, very excited. Been slow going for me, other real life stuff and work happening, but I cannot wait to keep my BOP binge going!

So the new BOP book launching soon is now going to be a Black Label title. I’m all for adult stories, I just hope DC Comics allows BL series on here so we can all read them one year later! Pretty please! 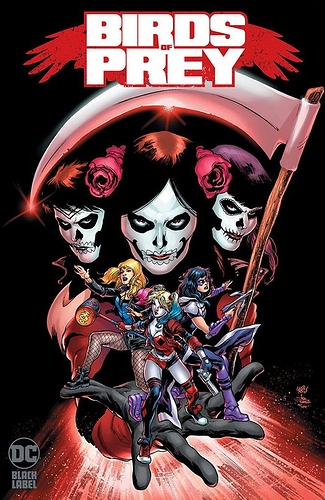