This past Tuesday night’s episode of Jeopardy featured a deal about Batman v1 #1 and the famous smiling villain that first appeared within its pages (if you said “Who is The Joker?” you know your stuff).

Mr. Trebek followed that up by saying “A special reminder that this Saturday is Batman Day.”. To Mr. Trebek, I shall endeavor to read a Batman related comic this Saturday in your honor as TV’s greatest current game show host and also in honor of your Batusi worthy plug!

Special thanks to whomever at WB got that deal to play out on a Sony produced TV series. 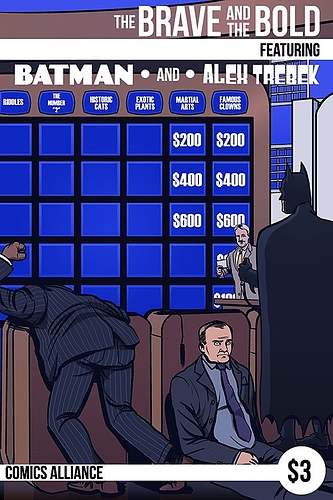 @Super-Squirrel You may get a check but it must be used for the Home Edition of Jeopardy.

Sorry Super-Squirrel, your answer was not in the form of a question.

To quote Riddler from Batman Forever: “But thank you for playing!”.

Awesome to see Batman Day get a shout out.

@NYJt3 It was! A Batman Day plug (along with assorted other instances of DC coming up on the show over the years) ensures that Jeopardy truly is great TV.

I was watching it and was thrill that Alex mention Batman day.

That pic is hilarious!!!

@Aquamon ComicsAlliance has a talented artist.