Adventures of Superman By Greg Rucka

Sometimes a comic feels like home. It brings back memories of younger and more reckless days along with the fun I had reading these books. Fast forward many years and here I am, late at night reading those same comic books once again. After hunting down the out of print trade paperbacks, at the time of this writing these are not yet in the DCUI library. Tonight seemed like a great time to check out the first volume. It should also be noted that the events in Superman/Batman vol. 1, 2, and 3 along with Godfall is a solid lead into Unconventional Warfare. I mean, you don’t need to read them as this is also a solid jumping on point due to it being the beginning of Rucka’s tenure. 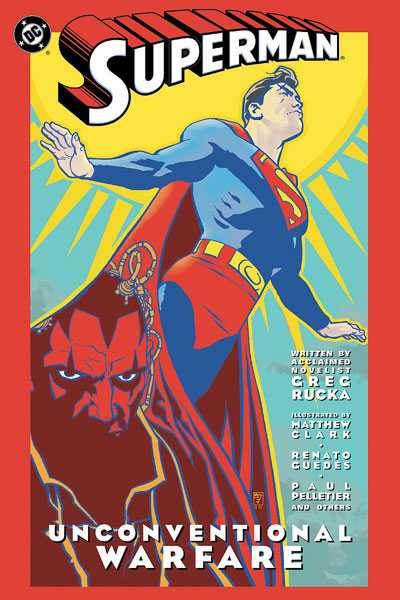 Unconventional Warfare has segments from Adventures of Superman 625 and 626. The main stories can be found in the recently reprinted and highly recommended Superman: Godfall (not all of the issues of this great story are on DCUI at time of writing). Seriously, Michael Turner + Superman = TAKE MY MONEY! Gotta stay focused! The meat of Unconventional Warfare are Adventures of Superman 627-632. 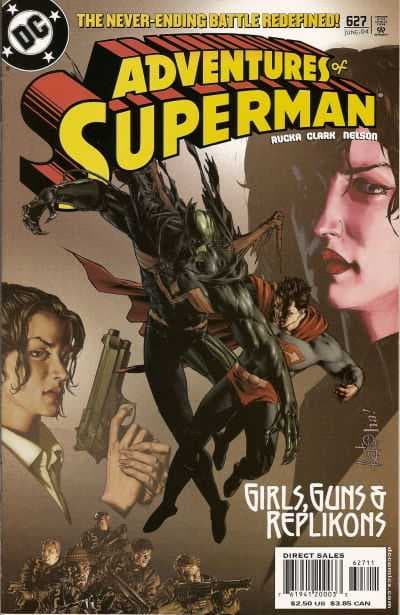 image400×615 38.7 KB
Issue 627 starts the Battery storyline. Clark is demoted to the crime beat at the Daily Planet and Lois is on her way into the middle of a warzone. A few new characters are introduced to Clark in this issue, mainly Lupé. To be honest, I miss seeing Maggie Sawyer in this role but Lupé is here and she is all business. If I had to compare her to another character in the DCU, Harvey Bullock comes to mind. She is hard headed and honestly, kind of “crazy” as she is described in the book. Also, at this point, very unlikable. Speaking of unlikable, Jerry Frank is a crime beat reporter for another newspaper. She has a chip on her shoulder and at this moment, I am not a fan of her. Even if I don’t like either of these characters Greg Rucka has laid the groundwork of fleshing them out.

Replikon returns and it is up to Superman to stop him! During the fight, Replikon asks Superman to help him right before he dies. Something is going on and Superman doesn’t like it. 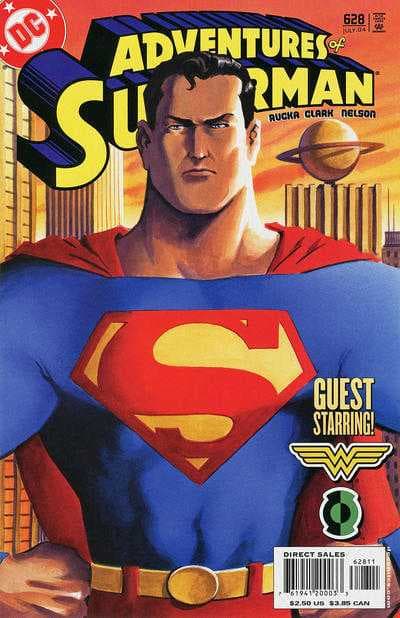 image400×618 44.5 KB
While there isn’t a lot of action in this issue, there sure is a lot of world and character building.

Superman goes to space with John Stewart to investigate what happened to Replikon. Meanwhile, Lois is getting reading to go to UMEC, the warzone. She leaves a message for Ambassador Diana Prince and Wonder Woman comes to the apartment. Lois wasn’t expecting that but Wonder Woman being Wonder Woman, she really should have expected her to come. The small favor that Lois asks Diana is to keep an eye on Clark. Make sure he eats, sleeps, and does laundry. Apparently, when Lois is away Clark becomes a workaholic both as a reporter and Superman. (told you there was character building!)

We also get more insight into Jerry Frank as she explains how disappointed that Clark is on the crime beat and not being the reporter that she looked up to. I still don’t like her but I am enjoy seeing her become a fleshed out character. I have said it a million times but I a firm believe a Superman story is only as good as the supporting characters. Sure, he is fighting crazy villains but its the slice of life aspect that I love.

How do these comics from many reboots ago relate to today’s comics? One single frame. Clark telling Lois, “Superman appears in a war zone, it looks like he’s fighting for one side or the other. I won’t play politics.” If you have been reading Superman: Son of Kal-El, this might sound familiar. Ah, comics! I love it when stuff like this happens.

Meanwhile, there is an ominous villain planning to take out Superman. Ruin.

I will leave it here so I don’t write a book in one post.

@Vroom I can’t wait to see your thoughts on these books!

I do have memories of reading these back in high school, getting them from my local library. The moment I remember the most is Lois being shot while reporting in the Middle East and Superman finding her from the other side of the world less than a second later. Definitely some good stuff there, I hope someday it gets digitalized and put here, and/or reprinted in trade.

I think a weekend project for me will be to dig out the trades of Rucka’s AOS (so hard, too; just go into my closet, pop open a long box and yoink all three of 'em out! Hard work, for sure.

) and re-read as much as I’ve time for, as I haven’t re-read these stories in years, but now certainly have a major jones for.

On the topic of Ruin, he’s one of my favorite '00s Superman villains. I dig his design and back story.

You had me at Greg Rucka…then I saw the part where this isn’t on DCUI.

The upside is many of the single issues can be found in the dollar bins. But yeah, they are not on DCUI yet. I know Vroom and myself have requested for these books a few times each.

This does explain why I haven’t read his Superman stuff though, since I have sought out and read basically everything else by him on DCUI. I hope to read this someday!

I think you would really enjoy Wonder Woman’s cameo! Her and Lois hanging out is so great!

I think you would really enjoy Wonder Woman’s cameo! Her and Lois hanging out is so great!

@Angel212 Have you read Rucka’s Lois Lane yet?

Pound for pound, it’s my favorite Rucka book of the last several years and it was easily my favorite Superman-related title when it was being published.

Rucka was so great on all the DC books he was writing during this era.

I gotta get around to reading his Lois book one of these days.

@Angel212 Have you read Rucka’s Lois Lane yet?

Yes, I have! In fact, I loved it so much I bought the trade.

Did you get one of the early prints of that Lois Lane trade? 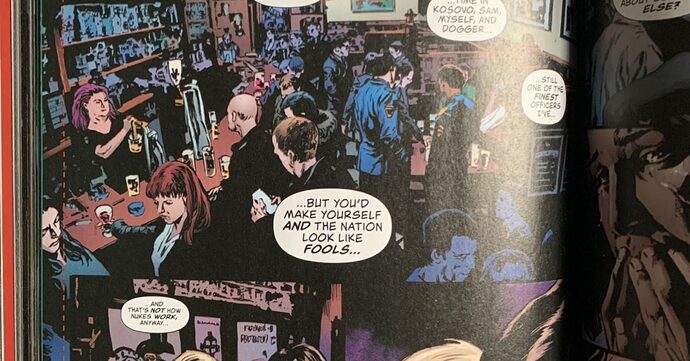 It might seem churlish to blame all of this on the recent redundancies and slashes made to DC Comics' collections department. But given how much recalls

Well I read that article and was ready to say no, mine doesn’t look like that. I came to this late so how could I get a first printing anyway? But then I checked my book: 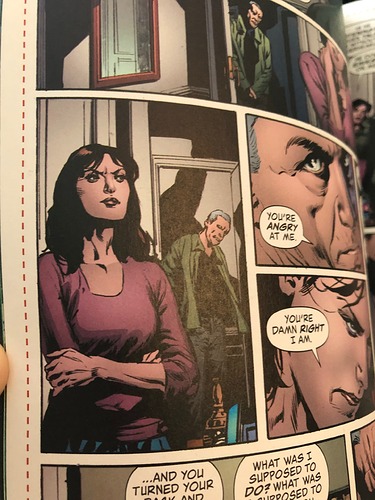 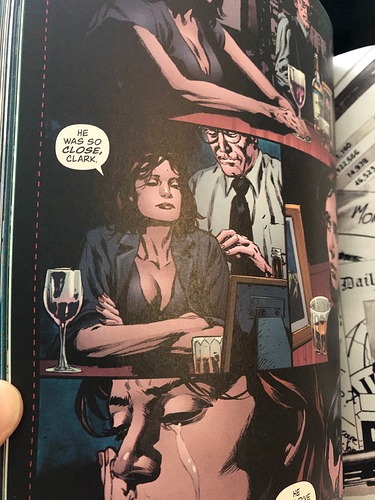 Man. Genuinely never noticed (I’ve read it at least twice), but now I can’t unsee it. It does appear to just be in that particular issue (the flashback about her dad).

Ah well. The main thing I noticed with the Lois Lane trade, since it was my first purchase of one from a recent series, was how the paper quality really has gone down in these editions. My Rebirth and Bombshells books have nice, glossy, vibrant pages. All the new DC books have this comic newsprint feel. I was wondering if it was a pandemic thing (paper shortages), a environmental recycled product thing, or just…a cheapness thing.

I’ll stop complaining now. I do love my books, really.