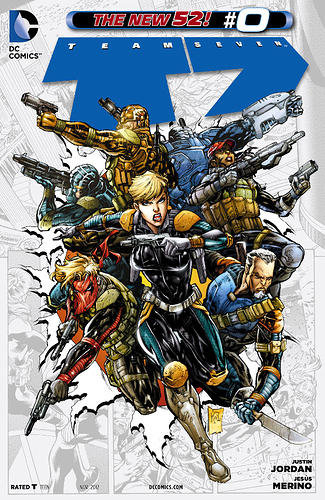 Welcome to the Acquired Taste Book Club! And this time, we’re going back to WildStorm! Sorta.

Because I’m still on my Birds of Prey kick, we’re going to follow Black Canary past the Flashpoint reboot over to the pages of New 52 Team 7.

And if you’re wondering why this took so long, it’s because I had this whole joke where we were going to read 7 issues of Team 7 in 7 days, but I kept missing Friday and putting it off to do the joke. Except now I see it actually went to #8, and there’s a #0, so the whole wait was pointless.

Next week: If I get my act together and actually post one of these next week, you can expect me to finally stop, ah, stretching to fit things into the club’s premise.

I liked it well enough. There’s parts that don’t quite add up near the end, like how the “present” story of Deathstroke encounting Lynch is never addressed, or how it looks like Caitlin Fairchild dies with the Ladytrons when at the time she was running around with the likes of Superboy and the Ravengers. But outside of that, it was a pretty fun, exciting military action comic with some pretty well done characters.

Have you read the original Team 7?

No, I’ve only read of the team through other books it interacted with, most notably Gen13. Because of that I’m going to skip the next question in favor of…

What do you think of Dinah in these issues?

I think she came off pretty well here. She had a strong focus, and this series feels like a good primer/explanation of her struggles and character from when she started in the New 52 in Birds of Prey and continues all the way up to her DCYou series. It’s not her classic origin by any stretch, but I think it works.

Do you think it was a good decision to integrate WildStorm characters into the main DCU?

I think on a case by case basis some characters worked out pretty well. For example, Midnighter was really fun, especially in Grayson and his own series. I feel like DC had a plan to make those characters shine and feel like a big, important part of the DCU, but could never fully utilize it.

I don’t think I can say like others that Wildstorm can’t gel with the DCU like others around the fandom do. Like, to me that’s like saying “Captain Marvel/Shazam can never fully work with the DCU” when we’ve seen examples of it working.

Will you join me in protesting Skinny Waller?

On principle, yes. But, I think if you are going to do that, then making her a former soldier like we see here is a good explanation for it. On the whole, this series actually works in being a pretty compelling origin of Amanda Waller, going from an idealistic intelligence officer to a pragmatist willing to sacrifice and kill anyone who stands in the way of accomplishing the mission.

And you know, why is there a #0? That’s dumb. It implies there is no comic (i.e. zero issues). And it’s not like Zero Hour, which had a coherent reason for it to be that way.

Well, all the other books at the time were at an issue #0, so I’ll allow it.

And for that matter, why would they give up a golden opportunity to stop at Issue #7? Instead, they made me write out seven questions as opposed to the usual four to play into my seven joke, but now I can’t use my seven joke and I have to write another question!

Because this was all flashback and we already know where most of these characters and up, I was really invested in this. None of the danger seemed like real danger.

Have you read the original Team 7?

No…other than a few issues of WildCats and Gen 13, I haven’t read much old school Wildstorm comics.

What do you think of Dinah in these issues?

I liked her, she seemed the most integral part of the team. But how did she go from Dinah Drake to Dinah Lance if Kurt is dead?

Do you think it was a good decision to integrate WildStorm characters into the main DCU?

Will you join me in protesting Skinny Waller?

Yes! Part of the joy of the character was that she was never a physical threat…everything she accomplished was through pure will power and deviousness.

And for that matter, why would they give up a golden opportunity to stop at Issue #7?

Yep, should have gone with 7 issues and had a different member of the team narrate each one.

But how did she go from Dinah Drake to Dinah Lance if Kurt is dead?

I took it that she continued to keep his name out of love and dedication to him. Not to mention that in other books, without spoiling too much, whether he was actually dead was a bit of a mystery…