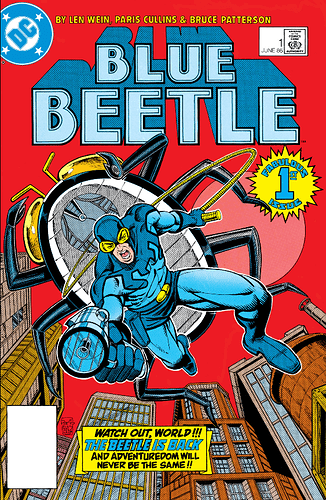 Welcome to the Acquired Taste Book Club! And if you look closely behind Blue Beetle and the Bug in that image, you’ll see that we’re still under the… 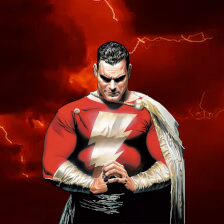 Red Skies! And we’re finishing off our participation in Crisis on Infinite Clubs by returning to Charlton Comics.

First up, we’re proceeding with the next four issues of The Question. Our fearless, faceless, fightin’, uh, fhero is back. And fear not, Captain Atom will return next time we look at Charlton.

But in the meantime, we’re digging into the third Post-Crisis Charlton series: Blue Beetle! In this case, we’re looking at Ted Kord, the second Blue Beetle, created by Steve Ditko (who also created The Question, The Creeper, and Hawk and Dove, along with co-creating a few obscure Marvel characters, like Arachnid-Boy or whatever his name is). This is, interestingly, a case of double-acquired tast-

Let me look this up.

This is, interestingly, a case of quadruple-acquired taste. See, the original Blue Beetle, Dan Garret (later renamed to Dan Garrett), was created by Will Eisner and Charles Nicholas for Fox Features Syndicate (no relation to 20th Century Fox) all the way back in Mystery Men Comics #1 from 1939. Only then, Fox Features Syndicate hit some financial rough waters in the early ‘40s and gave the character to Holyoke Publishing, a company they owed money to. But the later, Holyoke actually gave it back to Fox Features Syndicate, only for it to then get bought up by Charlton. And then Charlton had like twenty different volumes of Blue Beetle series. Eventually, Steve Ditko created Ted Kord (who was sort of like Batman’s non-powered-rich-guy-with-gadgets concept applied to a character with Captain Webface or whoever’s attitude and fighting style) as a successor to Dan Garrett. And he’s the one who ultimately showed up in Crisis on Infinite Earths and, thereafter, wound up here.

Next week: Bring up the weather channel, Watch the Sky, and listen closely to the Weatherman, because we’re going back on StormWatch!

To go further into the Fox Features Syndicate thing, they also had a lot of characters from Quality Comics, aka the characters the Freedom Fighters are from a couple weeks back. I remember because they were the one that published the Phantom Lady comic that was personally fingered by Fredric Wertham in Seduction of the Innocent.

So if this were an Inception thing, it would be like, sixteen freaking layers.

I still have a few days. Will download these tonight and jump on Blue Beetle right away.

Well to be fair to the not so good Dr Wertham, she did seduce me, so… 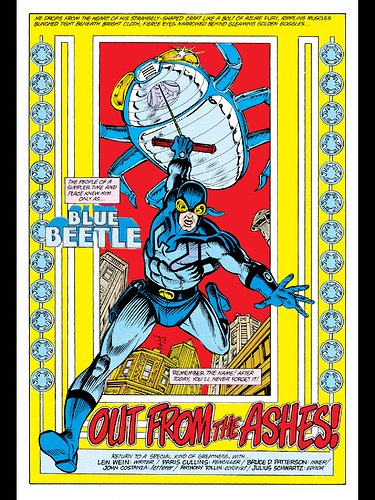 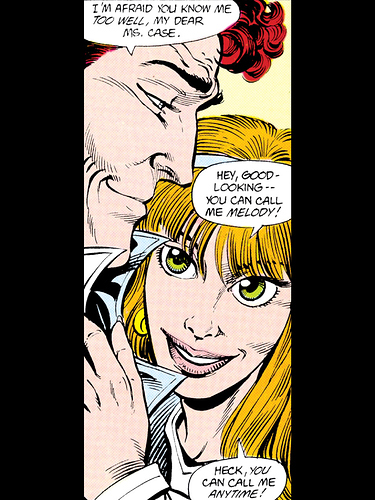 Think Melody might be related to this young lady? 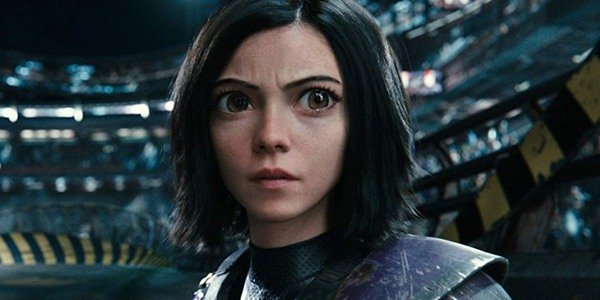 It’s creeping me out

I actually watched the movie for the first time today, and I’ll say that in my case, I got used to seeing her face/eyes pretty quickly when it was in motion. It’s also a REALLY GOOD movie in general, I highly recommend it.

The bug is so cool and used to good effect in this book. Need more bug

Don’t tell anyone I said this, but the Bug is cooler than the Batmobile.

It is, just read #2 during lunch and it looks great, is integrated well into the story

These issues are presented more as a sequence of one-shots than the longer story the first four presented. Which format do you prefer, if either?

The jury is still out. Both can be done well, and I really liked these issues, but I need to read a longer storyline from this series besides the intro before I know what I like better for this series. I’m betting both stay good.

Which issue is your favorite?

The first one from this week with the self-doubting crooked cop and the old lady headed to work was excellent. The last one stood out to me as well.

What’s your impression of the world of Hub City so far?

I read once how a lot of police officers can become controlling jerks because they mainly just see the worst of people. Hun City may not be that bad, but from what we’ve seen its horrible, but that may be because that’s all we’ve been shown. Kind of sucks to be without a functioning mayor, though.

What’s the best one-liner about the Question’s face?

I don’t recall any, but I did like when the cop asked him what he would say if he asked him who he was, “Something Enigmatic.”

Have you read any Ted Kord stories before? If not, what do you think of him? If so, how does this compare with his later portrayals?

This is one of the first series I owned every issue of, and I’ve read them many times over the years. I love me some Ted Kord Blue Beetle. Or loved him, right up to the headshot.

Which of the three ex-Charlton series do you like best so far?

Hard to choose. Leaving out BB since I’m so familiar with it, if I had to pick just one series to keep reading, I would go with The Question.

Are you interested in seeing more of any of the villains?

The Madmen are awesome! They should bring them back today and have them go up against the Creeper.y

Which of the Madmen is the most stylish? 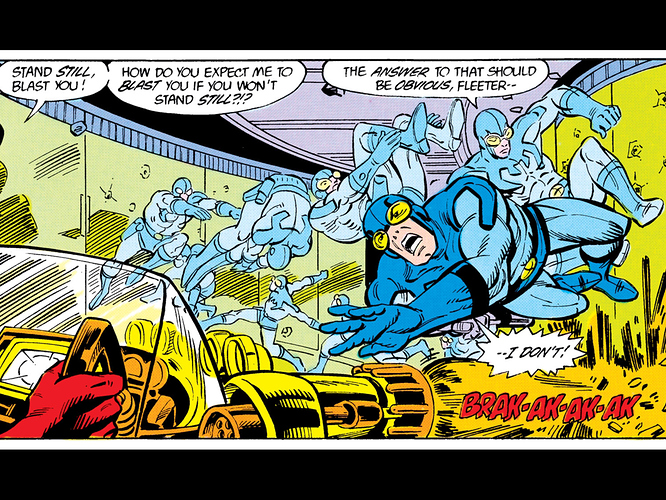 image2048×1536 2.51 MB
I’ve read both Blue Beetle and The Question when they joined the DCU. They were both distinct from anything else DC had at the time and really caught my attention. 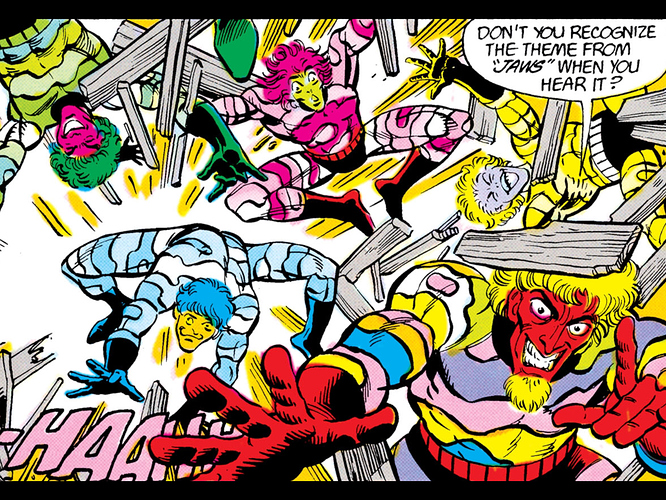 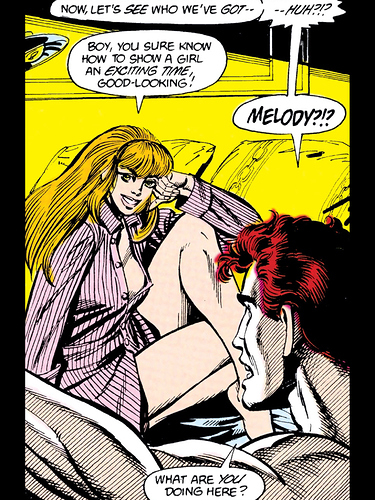 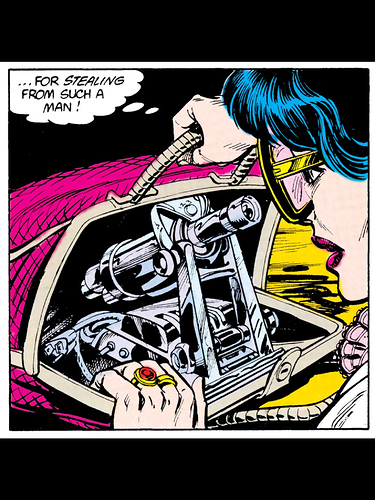 These issues are presented more as a sequence of one-shots than the longer story the first four presented. Which format do you prefer, if either?

I dunno, I think I like a mix of both, where you have the big “event” stories that really change things for the character, and have some smaller stories in between.

Which issue is your favorite?

I think I would go with #8, with the interesting killer that Vic was looking to find, especially since…he wasn’t sure if he was going to turn him in, initially. It really shows what makes Vic such a different sort of hero.

What’s your impression of the world of Hub City so far?

It makes Gotham and Bludhaven look like Metropolis. What’s interesting is that from what I remember, O’Neil actually based a lot of Hub City on an actual city in the US at the time, but wouldn’t say which it was during publication. It wasn’t until he wrote Helltown, which was basically an adaptation of the first arc of The Question but with a dash more Batman in it, that he admited that it was based on St Louis Missouri, which is funny for me because I don’t live that far away from there now.

What’s the best one-liner about the Question’s face?

When asked what happened to his face: “Acne medicine! I took too much.”

Have you read any Ted Kord stories before? If not, what do you think of him? If so, how does this compare with his later portrayals?

When I saw the reading and this question, I had the realization that no, I haven’t really read Ted in a solo basis before. I’ve read him with Booster Gold, with the JLI, in cameo roles in books like Birds of Prey and even when teamed up with Jaime Reyes during Rebirth, but we never really see any solo stories for him nowadays. Reading this book…I kinda understand why.

Which of the three ex-Charlton series do you like best so far?

The Question is definitely #1, I love the mix of noir storytelling and philosophical ponderings.

Captain Atom is next, definitely enjoying the entrigue going on in that book.

Blue Beetle here is definitely last. Like, I don’t think it’s BAD really, it’s just to me almost aggressively mediocre. Like, nothing about this book really stands out and literally the only reason I’d really want to keep reading for this club is because The Question apparently shows up next arc.

Are you interested in seeing more of any of the villains?

Nope. Not even remotely. Well, I’m curious about what happens to Doctor Alchemy, but that’s a Flash villain, so that doesn’t count.

Which of the Madmen is the most stylish?