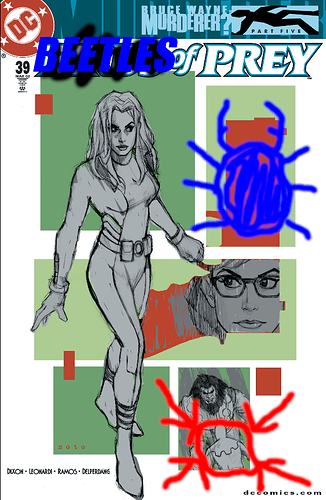 Welcome to the Acquired Taste Book Club! For this Charlton week, we’re looking at the Blue Beetle!

Yeah, Ted-Beetle was actually a regular part of this book’s cast back in the original run. Now, his appearances are a little sporadic, so I’ve gathered together the issues that focus on him most heavily even though they’re not quite sequential. You’re going to be seeing a few fragmented pieces of longer story arcs, which you should absolutely read but aren’t technically part of the assignment.

The main background you need is that prior to the first issue I’ve assigned, Oracle is shown to be in contact with an online pen-pal, who hints that he’s in “the hero business” and later proposes meeting in person.

For reference, #38 is largely irrelevant to the stuff going on around it, but absolutely feel free to read it.

Next week: Alright, alright, I legitimately can’t fit Birds of Prey into a WildStorm week. So I’m gonna have to settle for one Bird.

First off, that cover is fantastic. Both the original for issue 39, and Beetle endorsed cover. That was special embossed collector’s cover right?

I loved these issues. Straight up fantastic. People say “Straight Up” still right?

Although the cliff hanger at the end of 42 had me wondering what happened. I don’t know the exact timeline of these issues, but I’m guessing 96 is around Infinite Crisis which explains what happened there. I think Chuck Dixon nails Ted’s personality, at least as I take him from the comics I’ve read with him in them.

I do like me some Gail Simone, and understand why her run is pretty revered, but I think Dixon does a great job with these characters. I don’t see any glaring discrepencies in personality or character traits between the two runs, which means they flowed together pretty well. That’s not something you often see between bigger name writers during the same series. Often there is a massive tonal shift, and here I’m getting that.

I liked all these issue. Maybe the three issue arc was the best, just because it told a good side story for Ted, even if it felt a little cut short or dropped.

And keep them coming. I haven’t read this series, so I’m enjoying jumping around within it.

What do you think of Ted in these issues?

I really liked seeing him again. It was nice that he came out of retirement, but, for me, Dixon didn’t quite mail his character - not enough goofiness in his personality.

Do you like this take? How would you compare it to the Gail Simone run that we saw last time (and one issue of here)?

I have the first one shot where Dixon created the team, but I’m much more familiar and used to Simone’s version. It was actually a bit weird to me to see Oracle use so many make operatives. I can’t pick a favorite, though - I would need to read more of the Dixon run. I suspect I would still pick Simone, though.

Which issue/arc was the best of these?

That Power Girl issue was really good. Riveting and tragic.

How sick are you of my assigning this series over and over again?

I actually think it was really cool picking one series and seeing how acquired characters were used in it. Are we going to read a bunch of Wonder Woman comics when her new movie comes out?

Did I finally join this club just so I could snatch up the Question flair? Who can say for sure?

Ted is kind of adorable as Barbara’s long distance tech talk pal, but… addressing the romantic overtures laid out here, and maybe this is because I think so highly of Oracle, but I kinda think Babs is out of his league? Plus I imagine Ted as being closer to Bruce’s age than Babs’ and it always skeeves me when she’s paired up with much older guys. (Which happens… a lot.)

Chuck Dixon’s run on the Birds may not be as iconic as Gail’s, but it’s still a lot of fun. For all the goodwill he’s dashed recently with his dive off the conservative deep end, he did a lot of good work for DC establishing some of our most beloved characters and concepts from that era. Though if you’re looking for it, you can see a little bit of the creep he turned out to be lurking in the corners.

Out of this lot, my favorite has got to be BOP #37, one of the most fun tie-ins to come out of the LAST LAUGH event. Condiment King finally debuts in the DC Universe… and he’s a serious threat! A perfectly ridiculous enemy to reflect upon the traditional JLI-style antics of Ted Kord. Plus, we get a little teaser here to a much internally discussed plot line which was never meant to be… at one point, it was planned that Tim Drake would succeed Ted as the new Blue Beetle. But INFINITE CRISIS changed those plans, and we ended up with Jaime instead. (And we’re frankly better for it, but still… it’s nice to think about what might have been.)

Hope you guys don’t mind. I’m actually trying the lurker role for this one, speed reading some.

What do you think of Ted in these issues?

He’s okay – while I agree that the initial idea to make him a possible romantic interesting isn’t the best idea, I do like him as a fellow nerd friend for Barbara to bounce ideas with.

Seven of these eight issues are from the oft-overlooked original Chuck Dixon run of the title. Do you like this take? How would you compare it to the Gail Simone run that we saw last time (and one issue of here)? Don’t worry, I’m used to people saying Simone’s run is better and I don’t even entirely disagree so you’ll only hurt my feelings a little.

Considering how I frequently belt you with stuff like “Damian Wayne is a far more interesting Robin than Tim Drake,” you’re probably used to me hurting your feelings.

Seriously, while I do think that Dixon did layout a great foundation for the book in terms of establishing the character dynamic of Barbara Gordon and Dinah Lance, a lot of the other parts of the book kind of felt bland and not as interesting. I think Gail was able to take that dynamic, what made BOP good, and then expanded on it and I think created the truly iconic take on these characters.

Which issue/arc was the best of these?

The one I liked the most was #42. While the art I think was kind of the ugliest of all the issues here, it was the most interesting in terms of story. Whenever we’d see Power Girl show up in these issues they always mention some sort of bad blood between her and Oracle and I always was curious as to the story behind it. Seeing it here I think it doesn’t disappoint, and it is a solid moral quandry and I can totally understand both sides to what happened. I just find it a little sad that while Karen here admits she puts a lot of blame on Oracle so she doesn’t focus on how she blew it, and in the Spy Smasher stuff last go around we see Karen show up to help Barbara at the end, we never really get to see them reconsile. Now I’m just really curious and want to see a Batgirl/Power Girl team up, that could be fun.

How sick are you of my assigning this series over and over again?

I mean, I’d be surprised if you pull more out, but I’m not going to complain about reading BOP.