A Tale of Two Aqualads: The Evolutions of Jackson Hyde and Kaldur'ahm 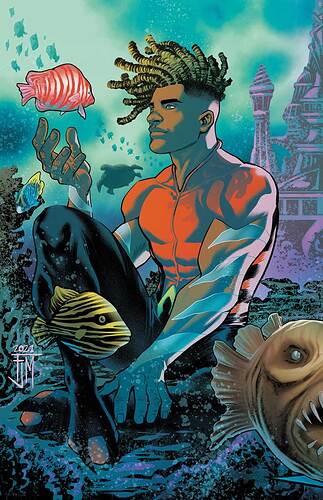 We’re deep in the heart of Pride Month, an occasion to celebrate diverse sexualities and sexual identities. And for all of us here at DC, there’s plenty to be proud of. But of all the rising stars who proudly represent a broader range of queer identity, few shine brighter than Jackson Hyde—DC’s very own Aqualad, soon to be an Aquaman.

Some say that Aqualad was created for the Young Justice TV series in 2010. And yet, his first appearance came months before that, in Brightest Day #4. On the show, this 21st Century Aqualad is called Kaldur’ahm. In the comics, he’s Jackson. Both are the son of Black Manta. Both are the heir apparent to the mantle of Aquaman. But are they the same character, or are they different people altogether? With Jackson’s own limited series just announced, Aquaman: The Becoming, now is the perfect time to set the record straight. Let’s take a deep dive into the history of the Aqualad, Jackson Hyde.

To immerse yourself in the deep dive of the evolution of Aqualad, head over to DC Comics!

Which Aqualad do you prefer? Jackson Hyde or Cal Durham? Let us know in the comments!

Heyyyyy, it’s another one from ya boy