A Sort Of Dumb Question

I was re-reading JLA: Earth 2, and I realized that I have no idea who the hero rebuilding the Washington Memorial in the background is. My guess was Martian Manhunter, but I’ve never really thought of him as a super-speed type. I suppose it could be the Flash, but the trail is blue, not red or yellow. Anyway, it’s driving me CRAZY. 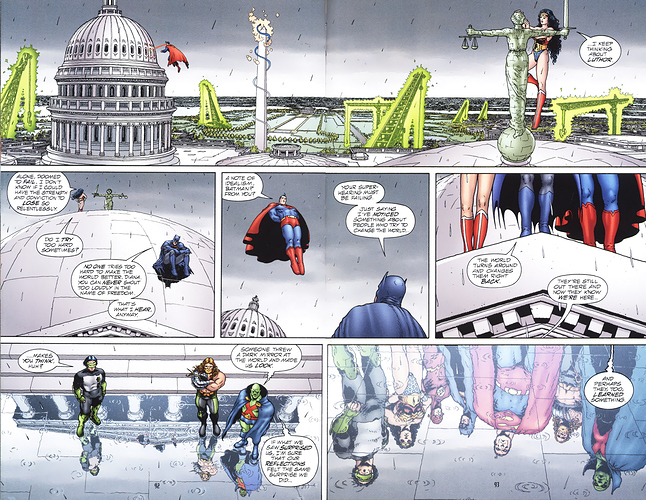 It could be a case of miscommunication between the colorist and the rest of the creative team. There’s already a mistake with Superman in that panel. Anyone who has seen Superman IV knows that the Man of Tomorrow’s masonry vision is blue, not red.

That’s a good question – I first thought it might have been Plastic Man looping his body around to fix the top, but like you said this is a blue streak, and Eel would have to be kind of dragged by his ear to do clean-up work anyway.

I opened the comic up on my iPad and zoomed in as close as I could, and you can see the collar of Martian Manhunter. I think. Alternately, it could be Evil Earth Savitar working for the good guys back on Earth-2.

Elongated Man, maybe?
I know his color scheme has, classically, been white and purple, but maybe it was a costume he had for a time in that period? Or a coloring goof.

Could be J’onn using his shapeshifting to stretch, I guess, though I don’t know what purpose that would serve.

I just started Eath 2’s I love em so far. I started em probably 4 months ago, & stopped ( no reason just did) somewhere after Dr. Fate tower scene. I’m going to get back to them for sure. Now I’ll have a mystery to look for. So what u thought was a sorta dumb question, is now something for me to look forward to. Gotta love it.

Most likely an error made by the colorist. It’s a surprise what slips out sometimes.

I haven’t read JLA: Earth 2 in a while, but I don’t recall anyone with that shade of blue that isn’t Superman being in that story.