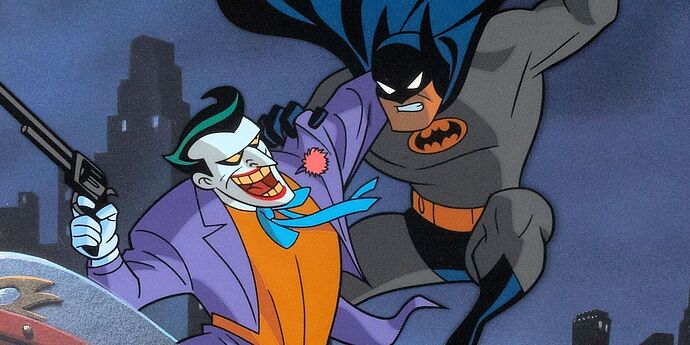 Batman the Animated series holds a special place in my heart, being my favorite cartoon/animated series ever. Yes, above Gravity Falls and yes, above Over the Garden Wall. I have already done my own reviews for a couple of episodes that stood out to me, whether that was by an episode’s sheer magnificence or me just wanting to casually write about a certain episode I had a strong opinion on. So I thought why not make up for lost time and do a retrospective of the entire series, one season at a time.

So without further ado, let’s dive into the world of Batman the Animated Series. 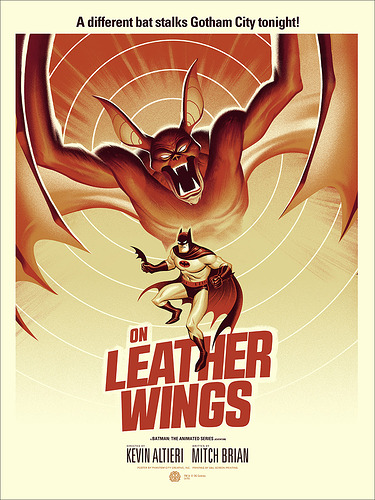 Honestly, as a kid this was probably my least favorite episode. Now I look back upon it and it’s actually pretty good. Being the first episode of the series, it’s not a surprise they introduce a lot of characters and their goals to get us ready for future plot points and I think they do a great job of balancing all of this while primarily telling a Man-Bat story. I love how the only extra character arc that actually ties into the main plot is Bullock’s because that makes sense.

The animation is top tier and it has some of the best shots in the entire series. The character designs are also on point. Man Bat’s design is really great, it’s so expressive and freakish and can switch between the two easily. Every single flap of Man Bat’s wings leave an impact both by animation and sound effects complementing each other so well.

A problem I really have with this episode is the fact that Kirk Langstrom’s turn into Man Bat is a little underdeveloped making confrontation of Batman and Man Bat feel a tad bit rushed. Despite this, I like the fast paced final battle. The movements are incredibly fluid and quick, while backing this up are breathtaking backgrounds of the city that speed past quickly.

Christmas with The Joker 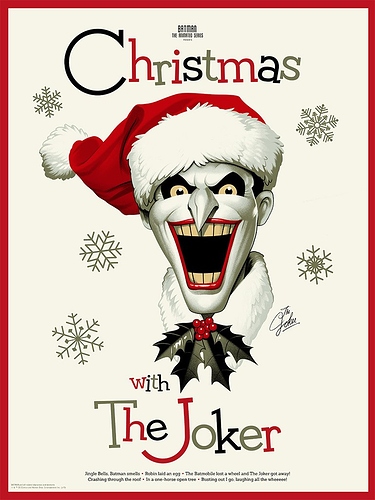 What can I say, It’s a classic. Christmas with the Joker is the first episode of Btas that I loved, despite it being the third I saw. The episode has a certain feel that makes it so endearing and a valid fan favorite. (Also, as a little bit of a disclaimer, everything positive I say basically describes “Wild Cards” just not as excellent, because you can’t top perfection.)

It is remarkable what they were able to accomplish with the atmosphere. As I stated before, there is a feel while watching this episode that elevates the experience and succeeds in getting the viewer in the Christmas spirit. The Joker takes center stage as the villain. He escaped Arkham for the holidays with one goal in mind, to put on a show for the viewers! Mark Hamill’s performance as the Joker works perfectly for a talk show host like the one seen here. Tension is non existent because of the light tone that is inflicted on us through the Joker’s endearing nature.

Along with this, the episode is purely concentrated on fun. Dick urging Bruce to sit down and finally watch It’s a Wonderful Life is the type of great creative dynamic I love. 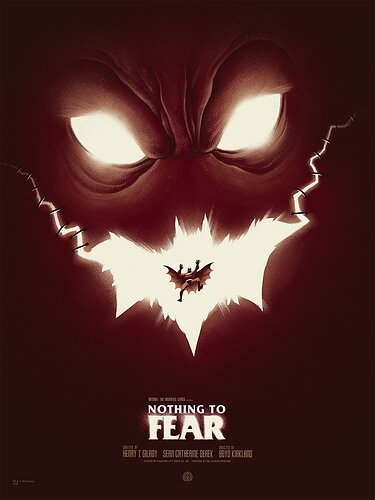 Nothing to fear is a great look into Bruce Wayne’s fears while also supplying what might be my version of Scarecrow’s origin.

I’ll start with the obvious point, Bruce’s struggle is handled fantastically. I really like how his fear is shown before Scarecrow arrives, having a fear related villain pull a fright out of nowhere is a big cliche that this episode, thankfully, does not fall victim to. The Alfred interaction is so heartfelt, good gracious I love this episode. Ultimately, Bruce overcomes his fear uttering the iconic line that completes the scene and lets it becomes one of Batman’s most remembered moments.

But how is our friend Jonathan Crane doing? Better than ever! Each of Scarecrow’s costume designs’ main intent is being more and more terrifying to where I find his costume present in this episode so refreshing. Rather than attempting to horrify everyone watching the episode by creating a nightmarish creature, Crane is more reminiscent on squirmy little worm. This also might be something that I just noticed, but both of the other two designs for Crane have little movement while the original costume allowed for such an expressive antagonist.

But this is not to say Crane is robbed of his core attributes, instead of building up his appearance to frighten those who surround him, Crane uses tools and methods in order to control anyone he pleases. And no matter how much one may love Crane’s season 4 design, the climax pulled off in Nothing to Fear would never have worked with such an expressionless and emotionless villain like the Scarecrow of season 4. 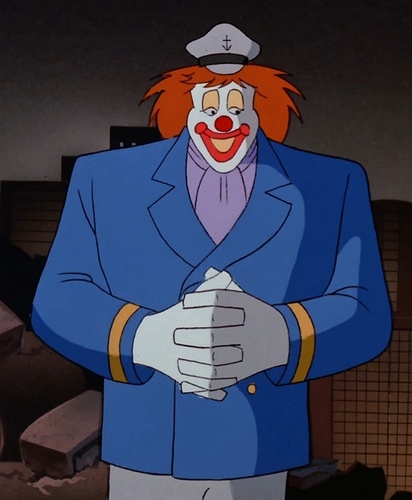 It occurred to me rewatching this one, that Captain Clown is the Mr. Wing before Mr. Wing. Both are giant henchmen of main batman villains who I love because of their sheer absurdity. By the way the Last Laugh isn’t good at all.

I’m sorry, but let me start off with some positives. The opening is good and the music played is a jam. I love Alfred’s April Fools joke just like everyone else.

Alright that’s about everything I like about this episode. As I said the opening music works very well, but they really didn’t need to play it six times after the opening. I see how it could have maybe also been played during Batman’s fight with the goons but that’s it, never again.

Btas’ Joker is absolutely fantastic when it comes to both Mark Hamill’s delivery and the lines he is given to do so. While I can probably recite half of Joker’s lines from Mask of the Phantasm his most memorable line here is “You killed Captain Clown! You killed Captain Clown!” and that’s kind of sad. Also I noted on rewatch that one of his lines was a Casablanca reference but I din’t write what the line was and I would like to keep it that way.

I’m sorry to all of you people who love this one but I can’t find myself to like this episode without disregarding the disappointing humor, overplayed music and dull plot. But Captain Clown boosts the score up by 0.5

Episode reviews will come out weekly and be featured in the replies.

My show’s early episodes were indeed hit or miss. It is still weird hearing Alfred with the different voice. 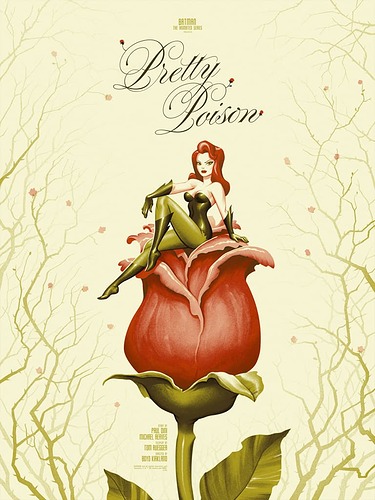 If I hadn’t already told you guys that Btas is my favorite show of all time, I’m not sure you all would have gotten the impression that I liked it, and this review certainly wouldn’t change that assumption.

But like the last review, I’ll start out with some positives. Diane Pershing is a great Poison Ivy. Her line delivery is on point and the tone of her voice fits the character perfectly. The character design for Ivy is also a favorite of mine. The Venus Flytrap Ivy controls look solid, granted the movements are somewhat limited. Introducing Harvey early on before Two-Face could have been a benefit but sadly most of my problems stem from him.

Again the inclusion of Harvey could have worked wonders but the writers take Harvey being in love way overboard. Harvey planning to propose is such an over the top decision that it not only feels unneeded, but also somewhat downgrades the significant relationship he has in an excellent future episode. Bruce even has a line telling Harvey how dumb his choice is.

When it comes to Poison Ivy, I’m mostly positive. Her actress and design are both great and her setup was really interesting. The cut from Harvey of the past funding the building of a prison on fertile land with the Mayor announcing a “better, safer Gotham” cutting to the present where a prison escape is taking place with drab colors presenting a bleak tone and the captions “a better, safer Gotham” appearing does a great job of solidifying the villain’s motivation. But another one of my problem is that Ivy’s ability to control a colossal Venus flytrap is never explained. Putting myself into the shoes of a kid watching this episode air with no prior knowledge of who Poison Ivy is I would have some questions. Also, while Ivy being defeated in a weak way could be seen as subversive rather than disappointing, I would say the latter

Ivy was defeated in a weak way because I am that amazing! Bring it on Ivy. Next time I will not go so easy on you or your plants!

dude this episode is special for me, it was the first BTAS episode i watched, but yeah fair more focus on Ivy over setting up the two face two parter(see what I did) would have been nice