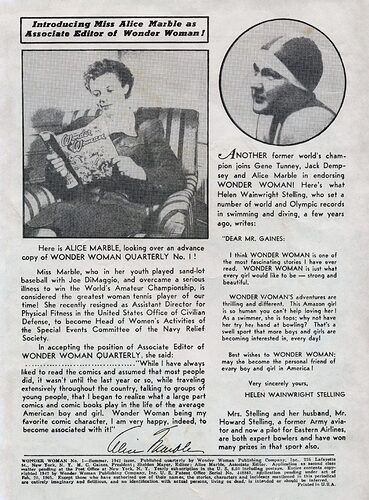 There have been plenty of amazing women in the history of comics. In fact, some of the most important and impactful writers, editors, artists, letterers, and colorists from the past 100+ years were women. But how many were also four-time U.S. Open winners and 18-time Grand Slam tennis champions, as well as Nazi-fighting spies who almost died in their attempts to take down fascism?

Just one, and her name was Alice Marble. 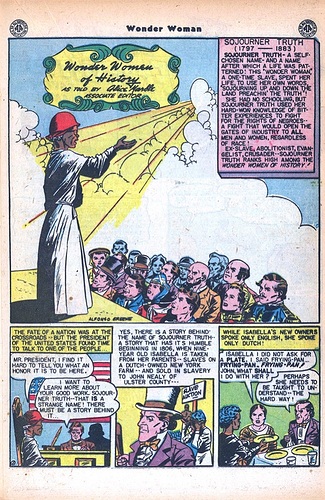 Read all about the fascinating life of Alice Marble in the News Section of dccomics.com.

What was the most amazing part of Alice’s life to you? Tell us in the comments below!

But how many were also four-time U.S. Open winners and 18-time Grand Slam tennis champions, as well as Nazi-fighting spies who almost died in their attempts to take down fascism?

Wow. It is hard to say what I am more impressed by, being an 18 time Grand Slam tennis champion or a Nazi-fighting spy!

Yeah, I had recently re-read WONDER WOMAN #1 and I don’t believe I had ever paid any any attention to that before.

I’m a huge tennis fan, and love the history of tennis – and got a real kick out of seeing Arthur Ashe and Jimmy Connors show up in the second issue of THE OTHER HISTORY OF THE DC UNIVERSE.

So I knew well who Alice Marble was, from her tennis accomplishments, I just never knew she had any involvement with Wonder Woman?!

And from the article.

In the early days of World War II, Marble was approached to be an athlete endorser of the then quite new Wonder Woman comic book. Instead, Marble became an associate editor of the popular series in its earliest days while William Moulton Marston and Harry G. Peter were still helming the title. During her time on the book, Marble created “Wonder Women of History,” an ongoing feature which highlighted brilliant and inspiring women throughout history who she felt embodied the same ideals as Wonder Woman—empowerment, justice, peace and compassion.

“Wonder Women of History” ran for twelve years beginning in the very first issue of Wonder Woman, with Marble personally credited until Wonder Woman #17. Each story was told from the perspective of the titular heroine Diana, and she even signed her name at the end of every tale. “Wonder Women of History” included entries on many vital and often ignored women, from Sojourner Truth to Clara Barton to Kit Coleman to Anna Pavlova, celebrating women’s achievements from the political to cultural. The stories also ran in many installments of Sensation Comics.

And quickly on tennis history.

One of my favorite books was The Goddess and the American Girl.

Better known and more admired in the 1920s and '30s than any politician, movie star, or royal family member, Suzanne Lenglen, lionized by Frenchmen as “The Goddess,” and Helen Wills, called “Queen Helen” or simply “The American Girl,” revolutionized tennis with their power and grace and beauty, and in the process virtually invented the concept of celebrity athlete. This superb dual biography–the first of either player to appear in English–follows their careers from the time they first set foot on a tennis court through their ascent and descent on the international circuit.

Suzanne Lenglen was introduced to the game at age eleven by her father, an overzealous French businessman who is credited with adapting tennis to women’s play. “Papa” Lenglen trained his daughter rigorously and throughout her career was her mentor and coach, providing sips of cognac at key moments and watching her every move with a stern parental eye. Lenglen, known by her trademark white ermine cape and diamond-studded headband, became the first non-English-speaking woman to win the Wimbledon singles championship–a title she held six times between 1919 and 1925. But to her fellow Frenchmen she was more than a great athlete: she was a symbol of resurgent French pride after the costly bloodshed of World War I, a national hero on the level of Joan of Arc.

Helen Wills beat Lenglen’s Wimbledon record although she lost the only match in which they came face to face. In 1938, Wills set a record of eight Wimbledon wins–unparalleled until Martina Navratilova tied it last year (in 1987). Wills dominated women’s tennis as few athletes in any sport have done, winning every singles match she entered from 1926 to 1933. Like Lenglen, Wills was introduced to tennis by her father and played a “man’s game.” But there the similarities end. Whereas Lenglen was homely and prone to nervous fits, Wills was a great American beauty whose coolness on the court earned her the name “Little Miss Poker face.” She was America’s heartthrob, a “California girl” whose health and good looks defined the American “New Woman.”

Engelmann brilliantly brings to life not only the women, their families, and friends, but the whole international sports world of the era. Filled with anecdotes about tennis clubs and the famous of the day–including Charlie Chaplin, Joseph Kennedy, and Bill Tilden–it is at once sports history, social history, and entertaining biography.

And from part of the New York Times review… 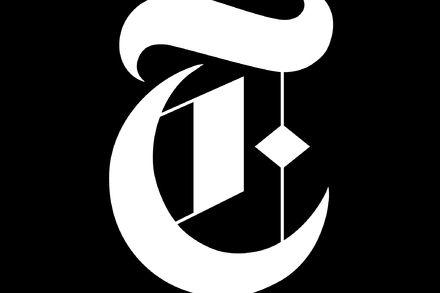 Most tennis buffs, if asked about the greatest rivalry in the women’s game, would undoubtedly cite Chris Evert versus Martina Navratilova. On the contrary. ‘‘The Goddess and the American Girl’’ argues that more than a half-century ago - before television ruled sports, before tennis stars were millionaires - Suzanne Lenglen of France and Helen Wills of California were the most ballyhooed rivals the sport ever produced. Amazingly, their ‘‘rivalry’’ consisted of one single match, played under chaotic conditions on the French Riviera in 1926. What’s controversial about the book is its book’s implication that Lenglen and Wills could lay claim to the twin titles of the best female players in history.

Larry Engelmann, who teaches history at San Jose State University in California, builds a persuasive case for both arguments in this overlong, overdue dual biography. It is a measure of the tennis world’s collective amnesia that both women have been largely forgotten, even though, in the 1920’s and 1930’s, they were bigger headliners than Jack Dempsey or Babe Ruth.

Lenglen, the ‘‘Goddess’’ of the title, is considered the greatest player yet by some tennis writers who saw her. A flamboyant character on and off the court, she was revered and feted by kings and film stars all over the globe. At home on the Riviera she was a high-strung empress, who screamed at bad line calls, gulped cognac between games and suffered nervous breakdowns. ‘‘She was the first female athlete to be acknowledged as a celebrity outside her particular sport,’’ according to Mr. Engelmann. She died young and tragically at 39, of anemia, just two days after Helen Wills won an amazing eighth Wimbledon singles title…

It’s was a really good book.

I learned about her from a documentary I saw. I really liked her “Wonder Women of History” segment. It must have been inspiring to young girls to read about them, especially if they knew that another such woman started the series.

I was sad when reading the Silver Age comics and it became “Marriage A la Mode.” It was still an interesting read, but the positive message from the “Wonder Women” series was definitely lost.

Thankfully, that spirit has returned with the modern incarnation of Wonder Woman.

One interesting thing about the history of Wonder Woman: it is a wild roller coaster ride all the way.

Hey all, it’s Tim Beedle the DCComics.com editor! I’ve been trying to make my way over here more often to say hi and engage with you a bit, and to thank all of you for reading the articles we run on the DC site. I was really happy to bring Rosie Knight back to write about Alice Marble for us as her story is one I really believe needs to be told. She is, hands down, one of the most inspiring, positive, unique and straight-up cool people to have ever worked in comics.

Love this type of information. Thanks for the inspiring read.