A Death in The Family... The Real Life Edition

I am on a genuine sentimental journey. At 57 years old my comic book love has never wavored but my collection sure has changed. I had some great stuff, read great stuff, and seen most of the iconic books in person. I own very little now…on purpose. The whole of all comic book store inventories are in my personal library and I “check a book out” occasionally only to return them eventionally. Having said that…I am now gathering books that hold great meaning to me in CGC graded slabs. My Dad died on Friday…my Mom when I was 18…these newly collected books each hold a story to pass down to my children. Sharing these books with you will be my theapy and my pleasure. In the days that go by I will post a picture of the book and the story that goes with it. Feel free to share your sentimental story the same way with the rest of us

I am so sorry for your loss!

Thank you very much. He was a good Dad

That is not an easy thing to go through, but a touching way to pay tribute to his life and to process his passing. Sending indigo & violet vibes your way.

Condolences to you and your family.

Thank you do much

Thank you so much

You have my deepest condolences!

Thank you very much.

My sincere condolences on the recent loss of your dad. Our hearts go out to you and your family, please know we’re here if you need us.

Truly means a lot thank you 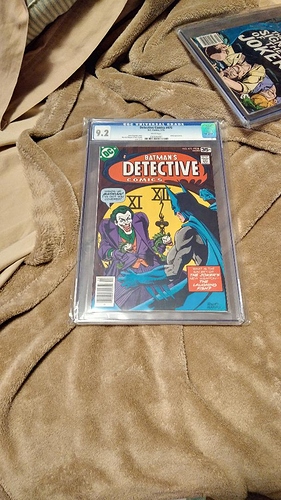 Before I begin my journey in earnest I would like to know if I can post pictures of comics from other companies? By the time I complete my memories and to give an accurate telling of how I went from DC to other companies to “home” again it would be helpful to illustrate the point with not only personal milestone books from DC but also by using a Carl Barks surprise, a certain “Big Red Cheese” book, and a slinger of webs…in all a total of 6 books other than DC. The story told differently would be like an Alan Moore comic illustrated in the vein of Captain Carrot…it can be done but it would be half a bubble off plumb. May I share the 6 other books in the telling? I will of course honor your wishes. Please let me know and then I will proceed accordingly. Thank you for letting me share, John

In 1978 I was 15 and by this time I was a real fan of comic books. A few years earlier a family friend sold me a box of comics he had saved from when he was he was a kid (more on that at a later date) and from that moment I was hooked. Sooo in 1978 I received an allowance of $5.00 dollars a week and I saved it all for the glorious comic book spinning rack at Eddie’s mini mart. I would weekly scour the rack looking for the latest and the best and beg my Mom to take me there since it was in the next town over. I remember like yesterday finding Detective Comics 475 in the rack and thinking “What a cool Joker cover, this goes right in my pile” I said “pile” because $5.00 bought a whole lot of comics in the 70’s. So on the way home I would pick the best of my pile to read on the way back while my Mom drove. Right away I thought this comic was above the norm. The artwork was just great and the story…my my what a story. The Joker trying to get royalties from fish he gave his grinning smile to and then killing people in front of the Batman by using his Joker toxin…I mean…who does that?!? It reminded me of how twisted the Joker could be, like the time he knew it would be so hard to see the road because of weather conditions that he repainted the white lines on the road which lead the driver to crash off a cliff. Again…who in their right mind does that!?! Oh yeah…we’re talking about the Joker here. As memorable as Detective Comics 475 was to me Detective Comics 476 would be even more memorable as it was a perfect day…but as they used to say “Tune in next time, same Bat Channel, Same Bat Time” for a perfect memory. 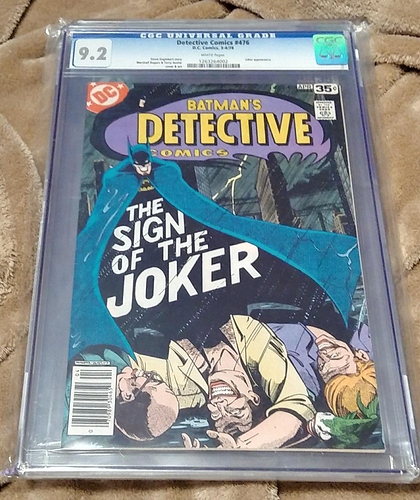 Detective 4761080×1283 193 KB
After going to Eddie’s mini mart to spend my allowance where I purchased Detective Comics 475, the next month would drag on painfully as I had to wait for the second part of the comic book. To be sure there would be other comic books to occupy my heart until and if…and that was a big “IF” I could find the other part of the story to complete the tale. These were the days of collecting comic books thru spinning racks and magazine displays and you hoped nobody beat you to it and took the comic you wanted or that nobody thumbed thru the books and bending them…comic stores?..that was just a dream in the early 70’s. IF you were lucky you could find someone who would trade for the book you wanted or you could send away for a mimeographed selling list of what somebody else MAY have. Trust me, you always had to list alternate issue numbers too in case they couldn’t send what you wanted . So after an agonizing wait the month passed and I went back to Eddie’s mini mart to look for part two of what years later would be described as one of the best Batman/Joker stories of them all…it was even up for an award or two. I remember the day vividly because I had to realllly beg Mom to take me because it was a dark and gloomy day. The sky was grey and I can still hear the windshield wipers keeping cadence with the rain hitting the car. When I got to Eddie’s the spinning rack was full of comics…new comics! What joy I felt as I ravaged thru the books looking for my favorites…and…it…was…there…Detective Comics 476. In mint condition no less. I swooped in like a bird of prey. Mine…all mine! On the way home I began to read to my hearts content. What makes this story so memorable is not only the story but the ambience of the trip to and from Eddie’s mini mart. The story in Detective comics 475 and 476 took place under dark and stormy conditions…just like in the car. Mom drove in silence with the only noise being the weather outside the car and in the comic book I was reading. When the story ended we pulled into our driveway…perfect, just a perfect day to read the most wonderful conclusion of this Batman/Joker story.
3 Likes
jdaego55.10147 August 19, 2020, 9:08pm #18

I am sorry for your loss. You have an awesome collection and great stories! Not enough dedicated fans that stick with it as long as you have!

sir you are an inspiration

My wife would call me something else

These day I am not about anything else but collecting memories from the heart. I have recycled all my old things or I would be retired by now…but that’s ok. I prefer memories instead of money. The 4 long boxes I have are mostly just Superman comics from 1986 to 2001 with a few goodies sprinkled in. My “Milestone” memory books are those that hold great meaning to me and are not the most expensive to own

Sorry for your loss.
But you have very great stories and nice comics.