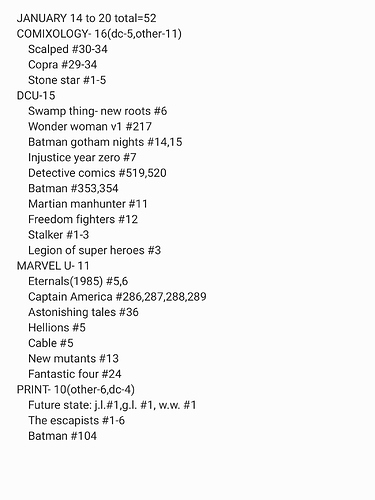 Ask and you shall receive

Welp, I got a strong feelin that DC’s gonna run away with the week’s readin to-do list

Ok this week I finished new 52 Batgirl and read both Doomsday Clock and Heroes in Crisis. I also read a bunch more New Mutants and some Batman. My 3 week total is 359 comics.

Ive somehow fallen into some KA ZAR books, stickin with my “tarzan-archtype-fights dinosaurs” theme of 2021. Sadly, kinda like here, there’s some non-digitized gaps. The '80s series was a cool surprise. DC-wise, I’ve been gorging all the new books and rereading the lead up to the reread of DEATH METAL.

JLA Classified: 13 issues from 2005
Writers: Grant Morrison (3 issues), Keith Giffen (co-writer on 6 issues), J.M. DeMatteis (co-writer on 6 issues), Warren Ellis (4 issues)
I put starting this series off as long as I could because I really dislike Morrison’s original run on JLA, and I wasn’t exactly hyped to go back to the same banality. But here we go. And it’s a three-issue-long action scene with a bunch of longwinded, bland characters talking incessantly about how awesome they are, and how even more awesome the Justice League is, and the half the plot basically boils down to Batman pulling gadgets out of his butt. And it’s an alien invasion, because something like eight separate alien invasions in Morrison’s original run was obviously not enough. At least it’s only three issues of that and not thirty-nine like the first time this particular writer/protagonist combination was inflicted on us.

After we get done flashing back to the worst era of the Justice League (Yeah, I said it. Even Extreme Justice was better, fight me.), we flash back to the best one (again, fight me). But it’s bittersweet because this is the last time this group of characters were together before the character assassination of Max and the literal assassinations of Max, Sue, and Ted. I mean, seriously, did Giffen and DeMatteis kill Dan DiDio’s puppy while they were writing this or something? Were they stealing Greg Rucka’s paperclips from his desk? Did they say something rude about Barry Allen too close to Geoff Johns? What was it about this story that provoked such unholy vengeance from the rest of DC?

The Ellis arc has painfully slow pacing. Like, Bendis-tier slow. Actually, no. Bendis at least usually maintains a pace of, like, a new plot point each issue. This thing spends two issues on nothing but inciting incident. And, like, we didn’t need a multi-page flashback to The Killing Joke with no relevance to anything else other than the general fact that Oracle exists and is vaguely in the plot.
133.

And that wraps up 2005. What a truly atrocious year of books. Detective Comics, JLA, and maybe Manhunter were just about the only titles I read this time around that were any good. Though admittedly, I’d read Birds of Prey, Batgirl, and Green Lantern from this year previously and those were all solid too.

But the biggest thing is that Infinite Crisis is just a horrific train wreck of an event, and it took over just about every title at one point or another.

Im tryin to remember, without cheatin/peekin, what all followed INFINITE CRISIS…52, one year later, um, I think things get better? This is where everything goes full-on BATMAN, right?All the way up til last Wednesday?

2006! I have read Nightwing, Birds of Prey, Batgirl, Green Lantern, 52, and Green Lantern Corps from this year, and enjoyed all but Nightwing (well, I wasn’t a fan of Dylan Horrocks on Batgirl and I forget when that baton got passed to Andersen Gabrych). Event-wise, Infinite Crisis was still ongoing at the start of the year and I’m still not rereading it. One Year Later makes a neat dividing line, so I’ll probably read up to it in each title before I actually do the jump.

Detective Comics: 4 issues from 2006, pre-One Year Later
Writers: David Lapham (2 issues), Shane McCarthy (2 issues)
Hey, wait a second, this arc in Detective Comics that’s been running since late ’04 is just Nick Fury vs. S.H.I.E.L.D.! It’s the same plot! I mean, I liked it in both places, but it’s totally the same concept. I mean, it’s also Invasion of the Body Snatchers, I guess. Anyway, I was expecting a more coherent revelation about what was actually happening. We really don’t learn much of anything in these last couple issues.

Anyway, McCarthy’s two-parter is surprisingly good given how boring of a villain Zsasz is.
141.

So out of ALL THE NEW,COOL STUFF that got added here, Ive been reading STALKER, because that’s how 2021 rolls. Anywhat, it’s not very good. Its actually quite awful all around. Its a 20 page, monthly advert for a crappy TSR role playing game that just goes thru the motions.But i just wiki’d the thing and this STALKER guy has been around every since! He popped up in Swamp Thing, a JSA arc, he had a back up in a new52 book. He had a story in WONDER WOMAN! After takin another big ol wiff of the spoilt milk, I’m gonna search em up.

Sorry I’m late to the party.
Here’s my sheet to my reading list: 2021 Reading - Google Sheets

Wonder Woman: 4 issues from 2006, pre-One Year Later
Writer: Greg Rucka
… Isn’t this just a remix of plot points from William Messner-Loebs and John Byrne? I feel like I’ve seen all of this before. And, like, it’s a classic Rucka ending, in that everything gets screwed up and a bunch of people die and the main character’s life is ruined, and… that’s it. That’s the story. Life sucks. Have a nice day. I guess I’m supposed to find that compelling or realistic or something, but for something that makes a big deal about “hope,” it just comes across as aimless bitterness. Like, carrying on in the face of adversity is one thing, but this isn’t the beginning of the run, it’s the end. Someone else has to write the carrying-on part.

So i did just kinda cheat/peak at which books STARTED in 2006, and it wasnt that bad. I read some of the ATOM, the GLC book, and there’s both a SUPERMAN and a BATMAN CONFIDENTIAL. I know you love them rotating creator/arc books…hehheh

The Flash: 3 issues from 2006, pre-One Year Later
Writer: Joey Cavalieri
I think I forgot what was actually going on in this book, so I wound up a little confused, but I guess these were fine issues.
156.

OK, due to reasons involving stuff and things, I’m gonna just binge through as much Wonder Woman stuff as I can.

Wonder Woman: 5 issues from 2006-2007 (Pre-Amazons Attack)
Writers: Allan Heinberg (4 issues), Will Pfeifer (1 issue)
You know, I don’t think any of the stories following the “Who is [insert whatever Donna Troy is calling herself this week here]?” title format are actually good.

Actually, while the premise of Diana suddenly going all secret-identity-superspy is… questionable in relation to prior characterization, and I’m not huge on “EVERY VILLAIN AT ONCE” arcs, I’m not immediately hating this. There are some interesting ideas going on.
208.

Aaaand that’s as far as I get before I barrel headlong into Amazons Attack, so that’s gonna be fun.