I’m hoping to average seven a day and so far my high is 13 in one day.

Batman: Gotham Knights: 12 issues from 2005 in total, but only 4 this year
Writers: Robbie Morrison (1 issue), A.J. Lieberman (11 issues)
Meh. Again, there are parts of it that are interesting, but, well, Hush himself is just not that interesting here. I mean, I like how Paul Dini writes him, and I even like the original story, but this focuses so much on him, and there’s just nothing to be all that excited about. And he’s been hovering around for so long, too. He came in at the start of this run like halfway through 2004, and has been the main focus this entire year, and his arc is still not done.
4.

The first one of the year! Woo!

Okay call me crazy, I will attempt, without a subscription

Whats cool, is, like last year someone posts up what theyve been readin, and that’ll throw the whole “plan” of what ya wanna read out the window because it sounds way more fun.

Ooh, my new new years resolution was for more prose books. Ill post some pics later. Got some cool old-school 70s books from MARVEL. Stories qritten by Wolfman, Wein, Big Jim Shooter and the like…

It just hit me today, that after 55+ issues of Spencer’s SPIDERMAN run, all of, maybe, 5 things have happened. Might be less, doubt if its any more than. And I can honestly only remember, and explain, half of those. Sigh.

Went on a total binge and finished off Brightest Day. I am also up to 25 issues of Excalibur. I have now read 90 comics in 5 days.

You’re doing way better than me, for sure. I’ve been slacking. Been busy and feeling burnt out.

I read the Wonder Woman and Swamp Thing books from Future State - I’ll wait on the rest until July when they show up on here. I really liked the Wonder Woman story and character. The writing was great and it’s fun story with some intrigue for what will happen in the second issue.

For Swamp Thing - am I missing something on who the character at the end is? I couldn’t place him but feel like I’m missing a big “oooohhhhhh!” moment by not knowing who it is. The idea of the story is interesting and I see what they’re doing with the different worlds and different results for where earth goes from the end of Death Metal.

I think it’s Floronic Man but I thought the story was really really good.

Im with Nat on the big bad. And SOOOOO happy to have a new Swampy book. Anywhat, before driftin on to some geeky podcast, here’s week one 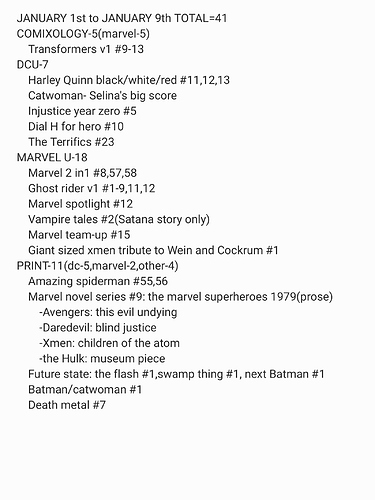 Now there were way better books this week, but my faves go to the GHOST RIDERs. Not for the story or art, but because of all those glorious footnotes that kept me hopping from title to title. And,maybe just a little, because at one point GR and Spidey were chasin a villian disguised as another villian in a bull outfit on motorcycles. And it was all Satan’s fault. At least, I think thats what was happening…

Pace thyself, 51 more weeks to go, and one big dump of new books here in a couple weeks…

My total is a gonna be a bit padded this week. While tryin not to watch the horrorshow that was the Pittsburgh/Cleveland game, I blazed thru INJUSTICE yr 3. Luckily, the landscape format was easy to read, while the tears ran down my face. Now if the O.S.U. game tonite goes south…itll be more depressin digital first funnybooks for me.

Gotham Central: 12 issues from 2005
Writers: Greg Rucka (6 issues, co-writer on 4), Ed Brubaker (2 issues, co-writer on 4)
The Major Crimes Unit sure is great at having solutions to cases get dumped in their laps by deus ex machinas. That or the case doesn’t get solved and a bunch of people die and everyone is sad. It’s just hard to care enough for the sad parts to hit all that hard, which is a very standard Rucka problem.

Actually, hang on, something occurs to me about the “Dead Robin” arc. Well, first of all, come on, guys. The Birds of Prey arc you’re ripping off wasn’t even one year old at the time. At least give it a little distance so you’re not so obvious. Second, they never explain how the killer got access to this random talent agency, which was supposed to be the big thing connecting all the victims. And this was the big four-issue, both-writers-on-deck arc for the year.
43.