2020 Lego DC Minifigures Are Out 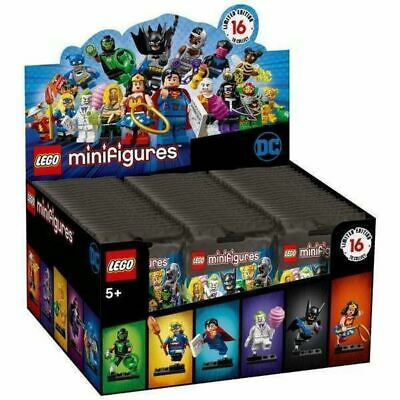 I didn’t buy any, as I’m waiting for Target and Walmart to get them, but they’re out (and ahead of their January 1st street date) for those who want them now.

For those who may be unaware, this series features 16 figures. They are:

I love DC characters in Lego form but I’m disappointed in the raise in price. Judging from leftovers in stores, it seems like the licensed packs (Disney, Potter) aren’t selling as well and I don’t want the higher price to rule out a series 2.
I like most of the choices except another Cyborg. I could do without more of the Trinity but at least they are somewhat changed.

$5 is a bit much, but the way I see it on one hand is that it’s worth it for the characters in this assortment that are rarely ever seen in toy form.

That said, I watched some unboxing videos of these on YouTube, and the duplicates are ample. I felt some of the bags at Kohl’s and couldn’t easily discern who was who.

For $5, Lego can put a code or marking on the bag so we know who’s inside, just like the single bagged Imaginext DC figures. At this price, I won’t stick around for more if I get more than a couple duplicates.

I just bought a set from eBay and it worked out to the same price as in store and 1 of each. Part of the enjoyment is the surprise but there’s only so much you can do with triples of a unique character.

Metamorpho rarely gets merch so the $5 is worth it. Dark Knoght joker too.

I’ll still get a couple lol

I’d love to see Lego sell these in box sets.

It would eliminate the walking on egg shells aspect of getting duplicates (as well as the duplicates themselves) and consumers could, you know, actually SEE what they’re going to spend their money on. What a radical idea…

Blind bag/box merchandise with no identifier of what’s inside is a holdover from the 00’s that needs to go away. The “fun” of the mystery is gone when all you get are duplicates.

You know, I’d really love a Hawkgirl, and a John Constantine.

Baz is one of my most anticipated, as he’s ridiculously under-represented in action figure form. He has, wait for it…one figure right now and that came out around 5 or 6 years ago.

Its too bad Mattel’s figure of him in the DC Multiverse line wasn’t released. Maybe McFarlane will do him justice in a two-pack with Jess.

Will definitely be picking some of these if not most of them! Yes I’m talkin about you hook hand aquaman!!!

If Lego had made a variant of him with gold shoulder armor so as to reflect that variant of his in Kenner’s Total Justice line, I would have been

, which ain’t too shabby.

Also pretty excited for a Jay Garrick minifig! I’ll take all the flash family I can get!

Jesse Quick, Max Mercury, Murmur, and Girder along with '90’s TV Flash and Trickster would be sweet.

Okay so I buy a lot of these blind bag mini figures all the time. Like a lot. Let me clear up some things.

These look amazing, and I will be buying some soon.

@Adamantine Maybe Target and Lego have a deal then, as I saw an end cap of older mini-figures for $3.99 (not on sale, regular price) this past weekend. I recall Walmart selling older series at that price too, and in the YouTube videos I’ve seen about the DC series, most folks that mention the price of these say that $4.99 is a price increase.

If you know of something that would assist in determining who’s who in this series, please share as it would be of great help.

@Vroom Sorry, you’re right that $4.99 is a little of a price increase. My child brain just always thought of $4 as $5. It’s still not a lot though. I don’t understand what the problem is. All that I know is that the toy store sells minifigures in the unopened bag with labels on them what they are.