13 Black Heroes Before Black Lightning - A Discussion of The Hornblower

This? This is the image of Mal you decided to share? 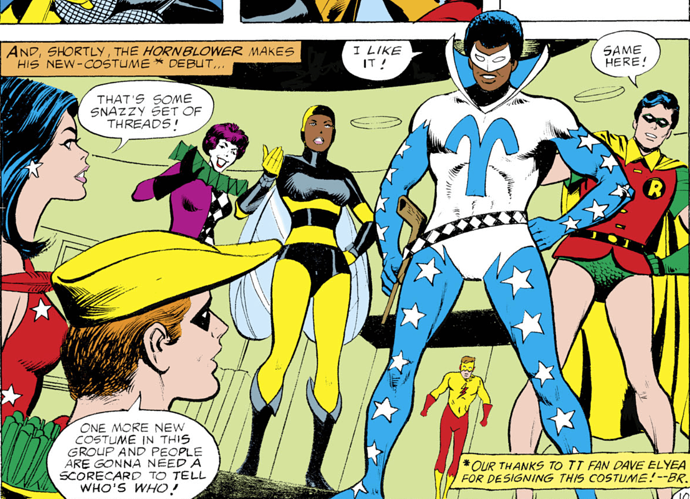 Are you trying to make me cry, @HubCityQuestion ?

But your article is worthy of time:

I’m in love with this description

And the Hornblower McFarlane figure!?

Historical racism can be dealt with in a sensitive and informative manner. I think the biggest mistake companies make is pretending that racism didn’t exist or erasing the racism that did. Admitting that racism exists (in particular to this article has existed) is the best way to move on from it. There are many examples of racism in comics from the exclusion of Black background characters in Swamp Thing (takes place in Louisiana 32% Black) to stereotypical portrayal of Blacks Billy Batson had a man servant named Steamboat Willie.
My issue is the “company line” on Tyroc “Truthfully, this power became somewhat difficult for writers to manage, as a concept which would probably work better in an audio medium.”
The most obvious problem with this explanation is that the words on the comic book pages are actually the written version of sounds that we make, therefore if that were true then all dialogue in comics is should “be somewhat difficult for writers to manage.”
“Tyroc’s powers, based upon sound, made him too difficult a character to depict in a comic book (even though DC’s Black Canary appeared in comics for years, as did Marvel Comics’ Banshee).” Wikipedia – the fact that those characters were successfully written for decades gives the lie to that explanation.
Paul Levitz, who arguably wrote the best run of the Legion of Super Heroes, said he disliked the character because of his origin – African people who escaped during the middle passage (the journey from the slave baracoons to destinations in other countries) who suffered racism and are thus suspicious of white people…
This explanation gets to the root of the problem with Tyroc, it wasn’t his powers that made writers uncomfortable it was his relationship to slavery that made the writers uncomfortable. Discussions of slavery makes many white people uncomfortable – they prefer to ignore the history of the World, this is why diversity is important.
To the Black fan of the Legion of Super Heroes the inclusion of a Black superhero was welcomed. it was celebrated. the fact that the white writer’s and artists didn’t acknowledge or understand the import of what they were creating to the point of creating a figure of mockery "Grell’s dislike of Tyroc was strong enough that he deliberately made him look ridiculous, saying, “I gave him a silly costume. It was somewhere between Elvis’ Las Vegas costume and something you would imagine a pimp on the street corner wearing.” To the point of using him as a token –
Later writers viewed Tyroc as a token; this was never more obvious than in the tabloid-sized All New Collectors’ Edition C-55 1978, Superboy and the Legion of Superheroes, “The Millennium Massacre”.
The cover read “Featuring all 23 Legionnaires in a new epic-length novel”. Through out the epic-length novel one character was singled out to guard the club house Tyroc. Wildfire, then team leader ordered, “Okay. Element Lad–you take Dream girl, Star boy and Tyroc, and guard head quarters!” (19) Later in the issue the computer randomly chose a Legionnaire to stay behind on guard, “Tyroc!! Seems like you came all the way from Marzal just to sit this one out, pal!” Wildfire announced surprisingly (53). Through out the whole issue Tyroc neither spoke nor did anything significant.(Levitz)
Paul Levitz, at the time vice president of operations and freelance writer, objected to the character. In the letter to the editor column, Legion Outpost Paul Levitz answered an angry reader about his mishandling of the lone Black character in a 22 character book. The reader wrote "…I read an interview with Paul Levitz where he confessed his hatred for the Tyroc character, supposedly because of the origin…Paul Levitz said that racial problems were a “thing of the past”…[He] went on to say that he might use Tyroc “only to kill him”(Goodwin).
All New Collectors Edition C55, Superboy and the Legion of Superheroes, “The Millennium Massacre”.
In-text citation: (Levitz)
Goodwin, A. Letter. Legion of Superheroes. Volume 1. Issue 297. New York: DC Comics. In-text citation: (Goodwin)

Since this information is in the public sphere trying to push a false narrative about the difficulty of the character preventing creators from using him makes the company look bad.
Plus one article on the last day of Black History Month is not a good look.

You raise some very good points here, @Lightningmax. However I would like to point out that we did run many articles throughout Black History Month about pivotal moments in DC history focused on black characters, including an article on black comic creators. This one was simply the last in the series.

To say nothing of what Kenner could have done with him, or heck, Toy Biz even!

Thanks Hubcityquestion!
Going back through all my emails I can’t find them!
If you could post links here I’ll give TPTB at DC props!

Sure thing! Here’s a directory to all of our other Black History Month articles this February:

@Lightningmax I must come to the defense of Mike Grell’s reputation. I’m assuming you read something out of context and I’d like to set the record straight.

TwoMorrow’s Publishing recently released an book on Mike’s career where he addresses both an incident of drawing an African-American that was colored as a Caucasian and his objection to the backstory of Tyroc and why he designed his costume as a retaliation to that backstory.

I’ve attached images of the Legion section and highlighted the text regarding both. 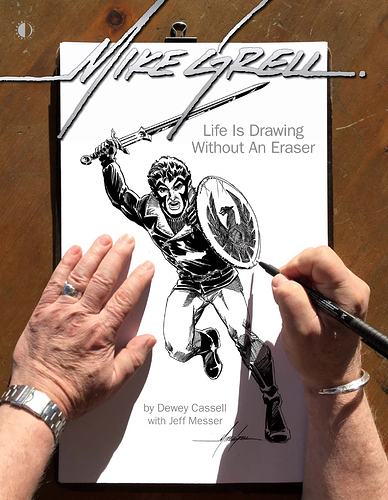 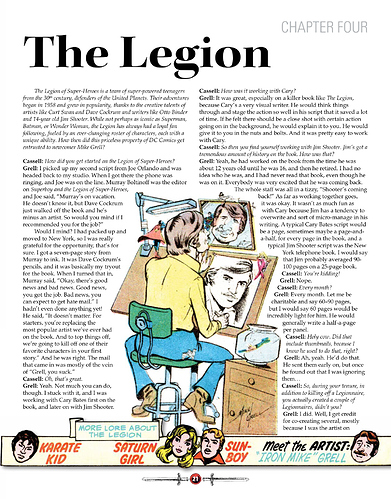 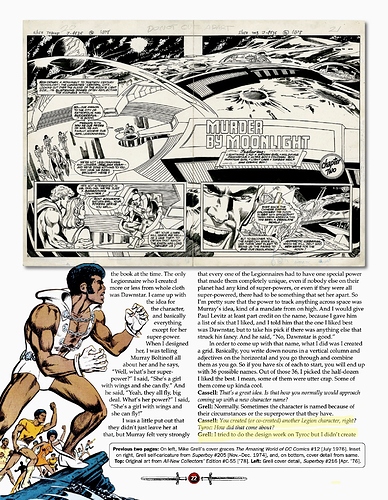 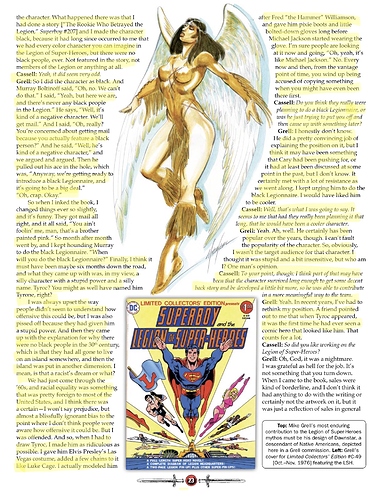 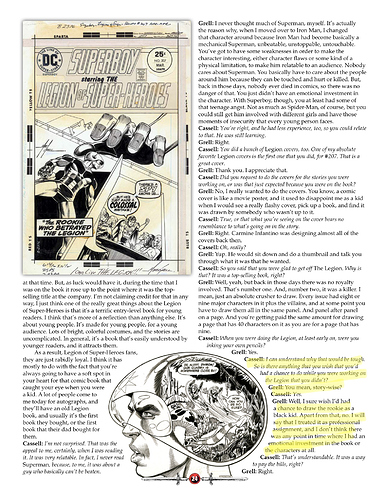 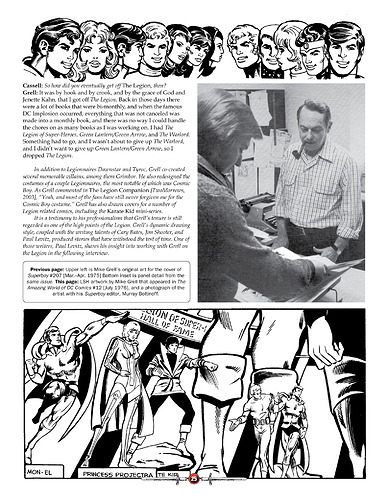 I hope this enlighten your understanding of what actually took place.

Important point, here, that deserves highlighting beyond the specific conversation. We can’t always trust our judgments about what is making us uncomfortable, because we instinctively don’t want to confront the uncomfortable thing. So, just because a writer says that they dropped the one black character from a roster because of some minor inconvenience, it doesn’t mean that it’s true and it doesn’t mean that the writer is deliberately lying.

The other points are excellent, too, but I wanted to draw attention to this one point, because the industry spends a lot of time imagining that writers have some grand plan built from first principles, when they’re just people, and people all have our hang-ups and issues.

I loved Tyroc as a character. But, a character that uses sound with a team that did a fair number of adventures in space, would also make that character difficult to write, regardless of race.

So in Tyroc’s case, I’m not sure his power set matched well with the LOSH. I’ve always thought that Tyroc would be best as a replacement for Ultra Boy. I think he would also be easier to write, simply because of the power set.

@ TravisMorgan
This information is known, that where the quote comes from. Whether you like a character or not, the audience you’re creating the character for have no choice in the matter. Instead of mocking the character by making it as bad as possible, he could have made the character with as much thought and care as he could. His action was worse than the racism he was supposedly standing against. He consciously made a Black character into a joke.

@jcolag
I think saying he was “uncomfortable with slavery” is the best I can give him. His handling of Black characters was not good.

In the letters to the editor column A. Goodwin informed Paul Levitz “…When Black models are used in department store catalogues, they like for them to present themselves as foreign because they are more exotic and less offensive than us American Blacks.” (Goodwin) Paul Levitz went on to defend his creation of a French speaking Black character as the only Legionnaire with an accent. “Jacques Foccart was introduced not for the sake of his skin color [note: coincidentally The new Invisible Kid was introduced in 1982 after Tyroc was written out of the book], but as a hopefully interesting character, with a French accent because of his origin on the Ivory Coast of Africa, where the French have taken great pains to help their language live on . An “American Black” would speak Interlac exactly as the other Legionnaires do, so the accent was added for an extra touch…”(Goodwin)

His explanation for the new Invisible kid says a lot about cultural insensitivity – Africa has many languages, but French is an invaders language, he made it sound like an act of pride for the colonizers in Africa. The Black character from the Ivory coast of Africa must speak the colonizer’s language, speak Interlac with an accent, and be a reluctant hero. That’s not an improvement on Tyroc, there’s still a lot of racial baggage.

@DeSade-acolyte
Writers are meant to write, Tyroc was a character that was essentially a blank slate. They could have written anything with the character and it would have applied. Therefore, everything they say about not using the character is an excuse including LSH in space.
Tyroc’s powers were never really explained, but he had eleven known powers – the powers weren’t necessarily sonic, the character made a sound and we saw the effects. The effects happened to himself – teleportation, force-field or to the environment pyrokinesis, explosions, telekinesis all of which mean they are not moving through the distances between objects in a manner that we currently understand. Therefore, outerspace would be no limit as long as he had atmosphere in his spacesuit. Wings don’t work in space no atmosphere, so Dawnstar makes no sense, but that’s never stopped her from being used.
The problem with a character’s race is that it causes some people to stop seeing them as a character and seeing them as a [insert race] character. Like an East Asian character must do martial arts and talk like a fortune cookie or a Native American character must be a great hunter tracker [Dawnstar}… writers are meant to write, if you don’t understand a character’s culture, race, do research its simple.

Laser
Light And Sound Emission Ray
Who knows what sound telekinesis makes? For anyone thinking Tyroc’s powers are sonic…